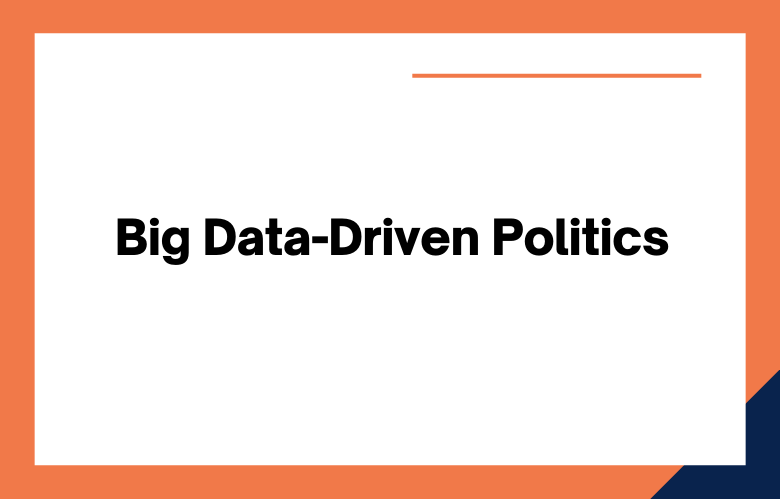 The campaign to elect a new president is well underway, and it’s hard to ignore the amount of data that has been collected and analyzed. What does this mean for us as voters? The campaigns use big data analytics to determine what we want, need, and care about so they can find out how best to reach us with their message. This post will discuss how these techniques are used in the political process.

In the context of political campaigns, big data analytics refers to a set of techniques that politicians use to gather large amounts of information about voters and then transform this into meaningful insight.

Data is the new oil. Big data analytics transform how people interact, influence one another, and vote for candidates in elections.

The election campaign became an extensive data analysis that transformed into a political movement.

BIG DATA is a term used to define the vast volumes of information available today and how it can be analyzed quickly for patterns or trends. In politics, data mining has been used since at least 2002 in the United States by both major parties to develop.

What is Big Data-Driven Politics

Big data-driven politics is a combination of big data and political science.

Big data-driven politics refers to big data and other advanced analytics for microtargeting, monitoring, and evaluating electoral campaigns. In addition, this technology is used in political persuasion by predicting voting preferences.

Big Data-Driven Politics is a system that delivers the best possible results through the effective use of data and analytics.

Big data-driven politics is the use of complex algorithms to create better political outcomes. It can be used both in politics and by politicians to gain power over people’s lives, but it also has many positive applications, such as aiding policy creation.

Big Data-Driven Politics is a recent phenomenon that captures the attention of many people. Some say it increases transparency, while others claim it reveals the valid will of the voters.

The use of Big Data analytics in political campaigns is a topic that has been widely discussed.

Did you know that big data is being applied to politics? One of the ways it can be used effectively is to find out about an opponent. The data will show patterns and trends, which can help steer a political campaign in the right direction.

The book “Applying Big Data for Political Success” is one of the best books I’ve read on politics. It’s easy to understand, and it gives insight into why some political parties are more successful than others.

Big Data is a new way to analyze data and develop political success. In the past, it was challenging to use Big Data because of its size, but now some algorithms can process these large amounts of information.

The first “big” data break was in the late seventies, when researchers realized that they could use large amounts of information to help them make decisions.

For me, this was the “big” break in my data science career. It’s like when you’re standing at a crossroads, and it feels like there are many ways to go, but you don’t know which one to take.

In 2016, many technology companies were using big data analytics to predict election results. Most of them were correct with their predictions. They used all sorts of data to make their predictions, including social media trends and search engine statistics.

The ability to make accurate predictions is one of the essential tools in science. Now, thanks to Big Data Analytics, we can predict events like elections with relative ease.

The future of Big Data Analytics in Elections

The future of big data analytics is in elections. Nowadays, many countries are using it to help them pick the right leaders for their country.

Big data and analytics are the future of elections, and we’re already seeing its impact today.

One of the most significant aspects of a politician’s campaign is to get enough votes. How do they achieve this? By collecting data from their voters and using it for future advertising, fundraising, etc…

The use of big data to analyze elections is an essential part of the process.

Big data is transforming how organizations do business, and it has become an essential tool for political campaign analytics.

The number of Facebook friends a candidate has, the amount of money spent on TV ads, and the effectiveness of a campaign’s get-out-the-vote efforts can all be tracked to determine whether or not they will win.

Big Data is an essential tool in the election campaign, and it should be treated as such.

Big Data has become the force behind many political campaign technologies today, allowing for detailed analysis of voters to help target specific demographics.

The use of Big Data Analytics is transforming the way that election campaigns are run.

Campaigns can now track voters down to their individual preferences with astonishing accuracy, using information gleaned from social media profiles and other sources on the web.

And yet, it’s not just about data collection; there’s also a need for careful analysis to glean important insights into how best to reach your target demographic.

For this reason, we offer an array of services ranging from voter targeting analytics to campaign consulting based on years of experience working with candidates at all levels across multiple states.

If you would like more information or want help putting together a winning strategy for next year’s elections, please contact us today! What does Big Data mean for political campaigning?