How Data Science is used in Political Predictions 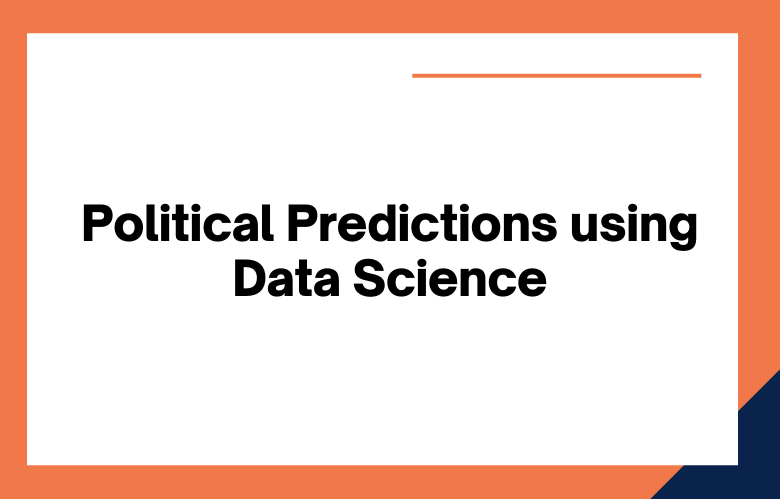 We’ll discuss different techniques to make political predictions about everything, from the results of an election to who is most likely to win a seat in parliament.

What is data science, & how is it used in political predictions

The study of extracting insights from large data sets is Data Science. It predicts future events, trends, and behaviors.

Data science is a computer science branch that deals with the automation of predictive analytics. In other words, data science is about making political predictions using data.

How is data science used in political predictions?

Data science can predict the outcome of elections, public opinion on policies, and voting patterns. It identifies potential political instability or conflict areas.

Data science is constantly evolving, but it is the study of extracting valuable insights from data at its core. Data science can predict voter behavior, track campaign spending, and forecast election outcomes in politics.

The history of data science and its use in politics

The history of data science is fascinating. Its use in politics is even more enjoyable. Data science has the potential to reform the way we make decisions.

Data science has a long and fascinating history, dating back to the early days of computing. It helped Allied forces code and decode enemy communications during World War II. Data science became increasingly important in business and government in the postwar years, as organizations began to crunch large amounts of data to gain insights into their operations.

In recent years, data science has taken on new importance in politics. Politicians and their campaigns have begun using data science tools to understand the electorate better and target their messaging. It led to unintended results such as the recent rise of ”fake news” and misinformation.

Polls and surveys predict election outcomes, but data science is playing an increasingly important role with the advent of big data.

Data scientists use large data sets to analyze trends and voter behavior, giving insights into how people are likely to vote.
This information can predict which candidate is likely to win an election.

Data science is increasingly predicting election outcomes. Experts can build models to help forecast how people will vote by analyzing massive data sets. This information is by campaigns targeting specific voters and the media to understand the electorate’s mood better.

Data science predicts election outcomes. This data creates models that consider various factors that could affect the result of an election. These models predict which party should win.

If you want to know how data science predicts election outcomes, you’ll have to ask a data scientist. They are the ones who mine mountains of data to find trends that give clues about what might happen on Election Day. It’s not an exact science, but data can provide us with a pretty good idea of who will win.

Data scientists analyze past election results and poll data to model different election outcomes. They use this information to create simulations that help them understand what could happen in future elections.

This type of analysis can be incredibly accurate. For example, in the 2016 US presidential election, many data scientists predicted that Donald Trump would win.

Electoral forecasting is just one way that data science changes the face of politics. As we collect more and more data, our ability to predict and influence election outcomes will only continue to grow.

The challenges of using data science in politics

Data science can be a powerful tool for understanding and predicting political behavior. It poses challenges in terms of its feasibility and its ethical implications.

One challenge is that data science requires a large amount of data to be effective. It can be challenging to obtain in political campaigns, often highly secretive. It may not be reliable even when available data since people can lie or misremember when asked about their political beliefs.

Another challenge is that data science may unintentionally reinforce existing biases. For example, if data from past elections predict future voting patterns, then factors like race or gender that have influenced past elections will continue to do so.

The vast amount of data collected by political campaigns can be overwhelming. Sifting through all of it to find the insights they need is a challenge that data scientists face.

When it comes to campaign strategy, data is everything. That’s why more and more campaigns are hiring data scientists to help them make sense of all the information they collect.

But working with political data comes with its own set of challenges. For one, it’s often poorly organized and messy. It can make finding the nuggets of information that can make or break a campaign tough.

Data science has the potential to reform the way we do politics. But some challenges come with using data science in this field.

For example, data manipulates public opinion. It is a challenge that political scientists have to be aware of when They rely on data to make decisions.

Another challenge is that data can never tell the whole story. There are always going to be intangible factors that data can’t capture. Politicians have to be careful not to rely too heavily on data, or they might miss essential considerations.

Data science is a powerful tool, but it’s not without challenges. Politics is a complex field, and data science is just one piece of the puzzle.

The future of data science and its impact on politics

Data science is constantly evolving and growing more sophisticated. There is a significant impact on politics as it becomes more refined. In the future, data science will be able to provide detailed insights into voting patterns and behavior, allowing political parties to target their messaging better. Additionally, data science will better predict election outcomes, giving incumbents a leg up in reelection campaigns. In short, the future of data science is exceptionally bright, and its impact on politics will be profound.

The future of data science holds great promise for revolutionizing politics. Its impact could be far-reaching and transformative, unleashing a new wave of data-driven insight and analysis that could shape everything from voter behavior to campaign strategy. Data science could help us better understand the complexities of the political process and ultimately lead to more effective and efficient government.

Data science will have a significant impact on politics in the future. It helps to predict election results, track campaign spending, and more. It will give parties and candidates a significant advantage in running their campaigns.

Looking ahead, the field of data science is poised to have a significant impact on politics. By harnessing the power of big data, analysts will gain insights into everything from voting patterns to the issues which matter to voters. In the hands of skilled practitioners, data science could revolutionize how campaigns run and win elections.

The future of data science is shrouded in potential. It can impact politics in several ways. In the hands of a skilled politician, data science uses to sway public opinion, track and predict voting patterns, and target campaigning.

As data is available and technology evolves, data science will become increasingly important in politics. By understanding and analyzing data, political scientists will be able to make more informed decisions that could potentially impact society. In the future, data science will play a vital role in politics and help shape the world as we know it.

The future of data science looks promising. Its impact on politics is already in the start. Experts predict that data science will become even more influential in the coming years.

The future of data science is shrouded in potential. Its impact is across various industries, from retail to politics. Electoral success may hinge on a party’s ability to use data analytics. Furthermore, data science could help unlock previously hidden patterns in political behavior.

Political data science is a relatively new field that combines the study of politics with data analytics and machine learning.

The goal is to improve our understanding of how people vote, what issues matter to them, and who will likely win an election.

Contact us if you would like help using political data science to predict the outcomes of elections or other political events.

With this experience, we help you get accurate results quickly and easily.