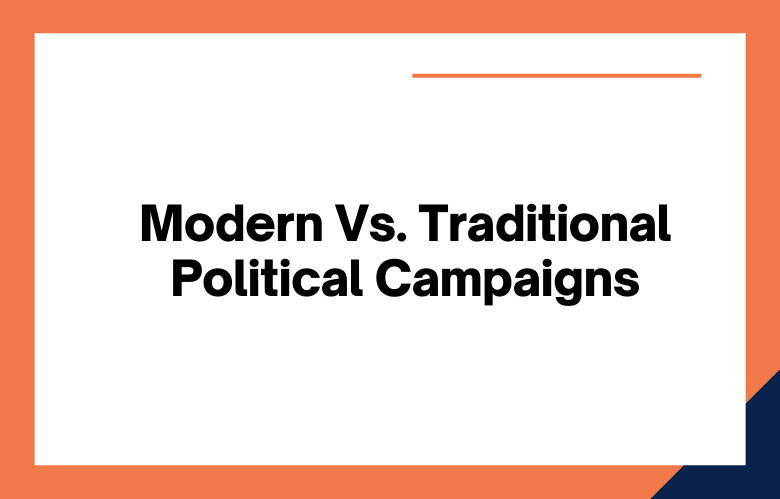 The question of whether modern political campaigns are better than traditional ones is a difficult one to answer. Modern campaigns have the advantage of being able to put more information online and reach out to voters in ways that were not possible before. Still, they also lack some of the face-to-face contacts with voters that have traditionally been so important.

Many people see modern campaigning as lacking any sense of authenticity or sincerity because it is so stage-managed. Traditional campaigning does not have these same disadvantages. Instead, it faces challenges such as an inability to use new media tools effectively and reaching only those who are closely following the campaign through traditional news sources.

In the modern era, political campaigns are not as simple as they once were. In the past, candidates would speak to a town or city and interact with residents one-on-one.

It is a mass marketing approach where candidates appeal to many people through social media, television ads, and fundraising efforts. It has its pros and cons but, in general, takes away from the personal aspect of campaigning, which can be seen as a downside for some voters.

What are Modern Political Campaigns?

An excellent political campaign must have a clear message, be consistent with that message and stay on topic. A great campaign is inspiring, not just informative. It should show voters where the candidate stands and why they deserve their vote.

Political campaigns have been around for decades. In the last two hundred years, however, they’ve changed dramatically.

A modern political campaign is a strategy that includes advertisements, events, social media campaigns, and other activities conducted to gain public support.

What are Traditional Political Campaigns?

A traditional political campaign is run by a candidate’s staff rather than an outside agency.

Traditional political campaigns are usually associated with competitive elections in the context of stable democratic societies. These campaign practices include the mass production and distribution of candidate information to voters through print media, television advertising, direct mailings, billboards, speeches at rallies.

Political campaigns have been around for a long time. They are used to promote or oppose political candidates and their ideologies.

It’s a campaign that uses traditional media to communicate a candidate’s platform, background, and issues.

A modern political campaign has a solid online presence and is where they spend most of their time. Traditional campaigns focus on more in-person interactions with the voters, like town squares and street corners.

Traditional political campaigns often rely on advertisements and televised speeches. Modern political campaigns, however, use social media to communicate with voters and get their friends and family members involved in the campaign.

With the rise of modern politics and social media, presidential campaigns have changed drastically in recent years. Gone are the days where politicians only had to rely on face-to-face contact or TV commercials to get their message out.

Today’s political campaign needs a fully automated digital marketing strategy that includes search engine optimization (SEO), pay-per-click advertising (PPC), and social media automation tools like Hootsuite for Facebook Ads and Twitter ads among other things. Contact me if you wish to help your candidate elected with our team of experts!