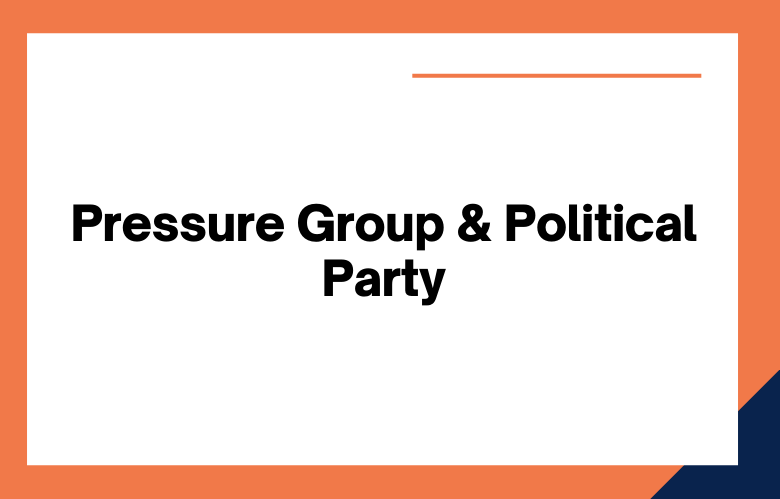 Both pressure groups and political parties are essential aspects of a functioning democracy, but they play different roles. Pressure groups are not affiliated with any particular party and exist to promote a specific issue or set of problems. On the other hand, political parties are affiliated with specific ideologies and compete for political power to implement their policies. This difference is key to understanding why one type of organization might be more successful.

What is a Pressure Group?

A pressure group is an interest group that seeks to influence the government’s plan, especially in an area it controls. One example is when environmental groups lobby for more regulations on pollution.

A pressure group is a political organization that attempts to influence legislation or other political decisions by applying public pressure.

A Pressure Group is nothing but a group of people who try to influence the government to do something they want.

A pressure group is an advocacy organization whose goal is to influence politics. They use lobbying, media campaigns, and publishing reports to pressure political figures or legislative bodies.

A pressure group is a company or organization that attempts to exert political pressure on decision-makers.

A pressure group is an organization whose members publicly pressure a government through lobbying, protesting, or drawing attention to their cause in the media.

Pressure groups are organizations that aim to influence public opinion.

What is a Political Party?

The only way to target your goals is to join a political party. The parties help you develop the most critical policies for you and connect you with like-minded individuals who can reach them.

Political parties are in-groups that influence the government by controlling specific parts. That is why they can be considered a political party’s job.

A political party is a community of people who work together to achieve the same goals. It’s also an organization that helps individuals get elected into office and promotes specific ideas or platforms.

Political parties are a group of people with similar political beliefs. They usually have a list of principles and candidates they support and positions on issues that aren’t clearly defined.

Political Parties are groups of people that want to rule a country or state.

A political party is a platform for people who believe in the same ideas and want to improve the place where they live. They come together to get power to implement their plans for improving the country.

A political party is an organization that represents the interests of a particular group, especially one seeking to form or gain control of a government.

Remembering this is not always the same as being well-informed or educated about an issue is essential.

For your voice to be heard and respected by those in power, you need more than just opinionated statements from yourself – you also need knowledge of how these systems work so that when you speak up, what you say has merit and can make a difference.

We offer political marketing consulting services for grassroots organizations to increase their impact with local, state, and national governments through targeted outreach campaigns designed around your needs. Let us know if we can help!