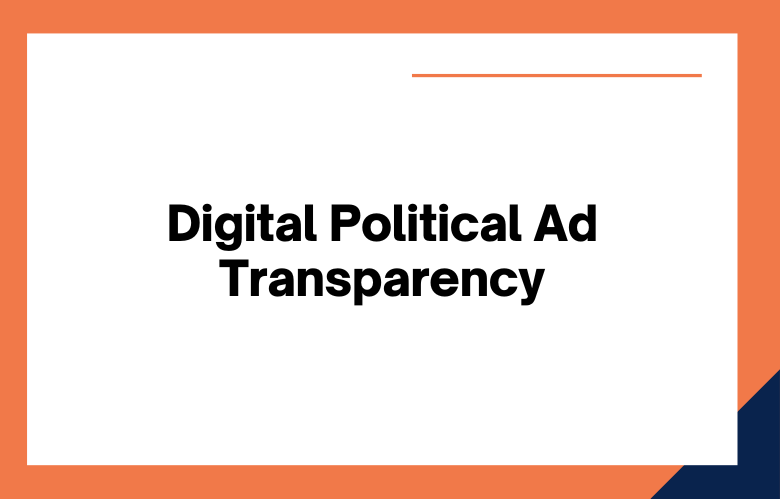 Digital political ad transparency is becoming more pressing as we head into the election. With ever-evolving technology, it’s harder to track where ads are coming from and who is funding them. The blog post teaches you how to research your opponent’s advertising so that you can make informed decisions to put your money during election season.

Stay ahead of the curve and learn how to fight fire with fire!

In today’s digital world, it’s easier than ever for political candidates to run ads on social media platforms like Facebook and Twitter. But what happens when you want to research these ads? How can you make the claims being made in them truthful?

We’ll show you how to research political ads and their sources so that you can make informed decisions about whom to vote for in the upcoming election.

Political campaigns are now relying more than ever on digital advertising. For a successful campaign, voters must be aware of the messages sent through these ads. We will outline a few ways that voters can research the advertising of their opponents.

An excellent resource for investigating digital political ads is YouTube. By typing in a specific candidate’s name and adding “ad” after it, you will pull up any advertisements they have released online. Often these videos are uploaded directly from the candidate’s official YouTube channel.

Another way to research digital political ads is through social media platforms like Facebook and Twitter. Candidates often post screenshots of their ads on their official pages as well as on their campaign staff’s pages.

Following candidates and other influential people involved in politics on social media will likely see many screenshots of digital political ads as they are released.’

What is Digital Political Ad Transparency?

Digital political ad transparency is a requirement for online platforms to make public information about who is purchasing political ads on their site. It includes the sponsor’s identity, how much to spend, the target audience, and contact information for the sponsor.

Digital political ad transparency is a requirement for online platforms to make public information about who is purchasing political ads on their site.

It includes the sponsor’s identity, how much to spend, the target audience, and contact information for the sponsor.

Sites that don’t adhere to the guidelines can face significant fines from the Federal Election Commission.

Digital Political Ad Transparency is a project led by a cross-sector consortium of Italian and international organizations. The project aims to increase online political advertising transparency and help build a more inclusive, pluralistic, and deliberative democracy.

It is essential in the current media landscape because online platforms increasingly influence public opinion. Still, there is little regulation around these ads and how they target. As a result, the risk is that only certain voices hear, exposing people to biased or distorted information.

To mitigate the risk is digital political ad transparency, which would require online platforms to inform the public about who is behind an ad, how much it spends on it, and who it targets. It allows voters to make informed choices and hold political campaigns and committees accountable for the ads they run.

Digitalpoliticaladtransparency.com is a website that seeks to increase the transparency of digital political ads. The site creates by two passionate individuals about campaign finance reform.

The website permit users to search for and view digital political ads shared on social media platforms. Users should leave comments and ratings on the ads, which aids in the overall goal of increasing transparency.

Digital political ad transparency is a way of ensuring that online political ads are clearly labeled and disclosed. This way, voters can make informed decisions about which candidates to support.

To research your opponent’s political ads, start by looking for the “Digital Political Ad Transparency” section on their website. It gives you a good idea of their ads and where they are running them. You can also try searching for their ads on social media platforms like Facebook and Twitter.

You can use the Digital Political Ad Transparency tool to research your opponent’s political ads.

This tool allows you to see how much money your opponent is spending on ads and which platforms they use to reach voters.

You can also see which topics their ads focus on and get an idea of their overall messaging strategy.

Using the tool, you better understand your opponent’s election strategy and plan your campaign accordingly.

Political ad transparency is a critical part of any democracy. As we head into the home stretch of this year’s election, it’s more important than ever to know whom to fund political ads and what those ads are saying.

We work with clients to ensure their advertising is transparent and compliant with all relevant regulations. If you’re keen to learn about digital political ad transparency that can help your campaign or organization, please don’t hesitate to contact us.

We would be happy to measure our expertise and answer any questions you may have. Thank you for reading!