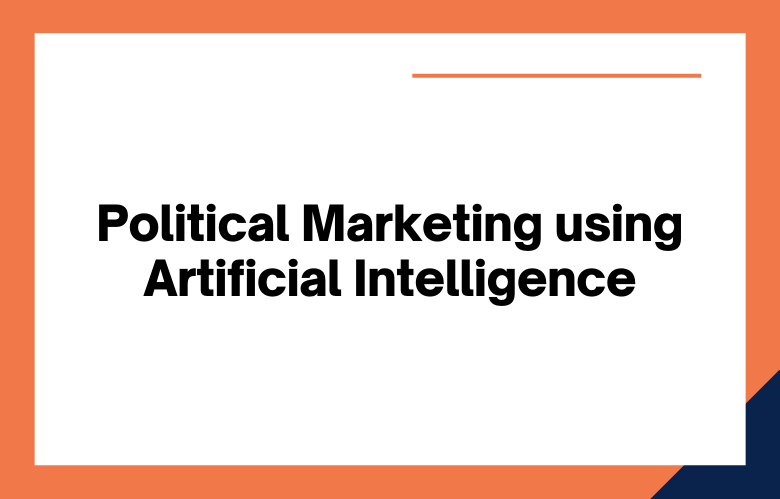 Political Marketing Strategies: With the world becoming more digitized and reliant on technology, artificial intelligence (AI) is transforming various industries—and politics is no exception. AI has the potential to help political parties and candidates shape better messages and target them more precisely to specific voters. This can, in turn, lead to increased voter turnout and support for political parties or candidates. We will explore how AI is being used in political marketing, its benefits in this arena, and some possible concerns that could arise from its use. Stay tuned!

Political marketing has always been a complex and ever-evolving beast. Campaigns must stay at the forefront of technology and new media platforms to be successful. AI is helping campaigns better understand and target voters, track sentiment, and shape their messages accordingly.

The Role of Artificial Intelligence in Political Marketing

Political marketing has evolved tremendously over the past years. Artificial intelligence is now being used to reach potential voters and help politicians get elected.

Artificial Intelligence has taken over the marketing industry in politics. I’ll explain how it works and then give a few examples of its use by politicians worldwide.

Artificial Intelligence is an integral part of political marketing. It can identify voters and predict their behavior, micro-target them with personalized messages, or even simulate a debate between two candidates.

The role of artificial intelligence in marketing and how it can be used to engage voters with political campaigns.

Data mining, knowledge representation, machine learning, and natural language processing are all AI methods that can improve the effectiveness of political advertising campaigns.

Artificial intelligence is widely used in political marketing; the most important benefit of AI is applying to many problems.

Artificial Intelligence has a significant impact on how political campaigns are designed and how politicians communicate with citizens.

The adoption of artificial intelligence (AI) is transforming how political campaigns are run and influencing how policymakers craft their messaging.

Artificial Intelligence is changing the way political campaigns are run. The ability to share information, raise money and get votes at scale has become almost second nature for many politicians.

Benefits and Risks Associated with AI in Politics

The benefits and risks associated with AI in politics are a topic that has been debated by policymakers, industry participants, academics, and the general public.

As technology advances and new inventions are made each year, we see more and more AI being used in our daily lives.

Artificial Intelligence is the fastest growing technology and will impact our society in many ways. It is already being used for healthcare, transportation, and infrastructure.

AI in politics is a hot topic that has been at the forefront of many people’s minds. The idea was first introduced with the rising Google Deepmind, Microsoft Clippy, and Facebook M, which all affected how we think about AI today- they’re not perfect. Still, their lack thereof can be seen as steps forward rather than backward when considering what society could achieve if it could harness this technology properly!

Artificial intelligence is an exciting and disruptive technology that will likely significantly impact our everyday lives. One area where AI has already started to change the game for us as individuals, but we can still influence positively or negatively with careful consideration: politics!

As AI continues its rapid expansion, society must consider the risks and possible benefits. The implications of this technology will not be limited only to politics but also how we educate our children or even make decisions about Healthcare services like dental treatment options- which could result from these advances with predictive analytics algorithms at work on x-rays images alone!

Artificial intelligence is being harnessed to search for new candidates, worrying about its effects on democracy.

The Future of Artificial Intelligence in Politics

Artificial Intelligence (AI) will impact human character in politics by making leaders smarter and better, but at the same time, AI can negatively impact politics by potentially destabilizing democracies.

Computer models will develop the voter models, political ads, and debates. They will write the speeches for our politicians and candidates. They will analyze and find the flaws in our system.

AI may have a significant impact on the political process. It may eventually be the case that elections are automatically run by a combination of computers, software, and robots. The only vote cast for a person to be in office is their vote.

Intelligent machines, not humans, will make as much as 80% of political decisions. Machines will be better at making decisions about things like war and peace, about an excellent crime-fighting strategy, or the best time to buy and sell stock futures.

Intelligent robots will make their mark on politics. Artificial intelligence will be of greater use for campaign data mining, speech writing, and opposition research.

Artificial intelligence will record every word you say, every image you look at, every conversation with friends, family, and colleagues. Where you go and what you do will be recorded. This forms a complete data model of you on the network. By analyzing this data, computers can figure out who you are and possibly determine how you will behave in the future.

There will soon be no motive for not voting. There will be remote polling stations and security measures to provide fair and honest elections.

Artificial intelligence will not be a “silver bullet” that changes politics; instead, it will be another tool with which to optimize the decisions being made by political leaders and “help” them make better decisions.

A machine that can predict the best political move at any given time will not be possible due to the vast amount of variables in human decision-making. It is more realistic to build artificial intelligence in politics that can predict.

The majority of citizens will have access to house-to-house (or door-to-door or mobile) retail politics, that is, using their mobile phone to identify themselves with their home address and cast their vote as it comes to their screen.

People will download the chosen candidates’ profile, view the combination of bright phone screens with the help of which the slates will be formed, and then with the aid of a critical pad, the individual will vote for their preferred slate of candidates. If they do not like any of the slates, they can vote online. This will be more efficient than today’s system, in which a candidate must get citizens to register and vote.

Artificial intelligence will be in politics for the following reasons

Artificial Intelligence may alter politics as we know it, and politicians may change their behavior as a result. The amount and depth of information available may allow voters to make informed decisions or possibly exacerbate the growing trend of polarized voting.

With the rise of artificial intelligence, political marketers can better understand how voters think and their motivations. Have you tried any AI-powered marketing strategies? If so, let us know below!