How Cybercriminals Get Ahold of Your Political Data 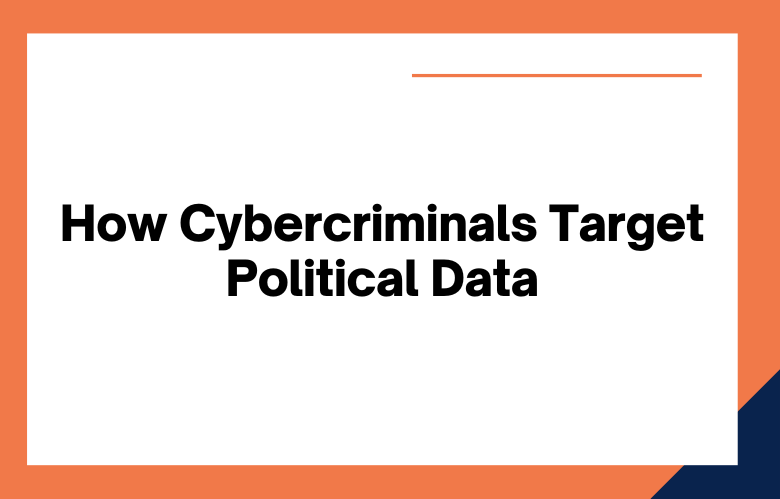 While it may seem like there’s no way to keep your data completely secure, you can take steps to protect yourself from cybercriminals. Here’s a look at how cybercriminals get ahold of your political data and what you can do to keep yourself safe.

How Cybercriminals Get Ahold Of Your Political Data

Cybercriminals are always looking for ways to get your personal information. One of the most common ways they do this is by setting up fake websites that look identical to real ones.

When you enter your information into these fake websites, cybercriminals now have access to it. They can then use this information for identity theft or sell it to other criminals.

Another way that cybercriminals get ahold of your political data is by phishing. Phishing is when someone sends you an email that looks like it’s from a legitimate source but is fake.

These emails often contain links to fake websites or attachments that download malware onto your computer. Once cybercriminals have access to your computer, they can steal your personal information or use it to commit crimes. They buy it from data brokers.

Data brokers are companies that buy and sell personal data. They get this data from various sources, including public records and surveys. Once they have this data, they package it up and sell it to the highest bidder. This is how cybercriminals were able to get ahold of the private data of tens of millions of Americans.

This is how Russian hackers were able to get ahold of the private data of 500 million Americans through the Office of Personnel Management hack. Cybercriminals can get their hands on a wealth of sensitive information they can use for nefarious purposes by hacking into government databases.

They buy it from unscrupulous employees. In any large organization, there will always be a few bad apples.

Whether through social engineering or simply offering a large sum of money, cybercriminals can convince employees with access to sensitive data to hand it over. This is why it’s so essential for companies to have strict security protocols in place and to vet their employees carefully.

This is why organizations must constantly update their security measures and patch holes. They use phishing scams. Phishing scams are one of the most popular methods of data theft because they’re so effective.

Cybercriminals can trick victims into handing over their data by posing as trusted individuals or organizations. This is why it’s essential to be vigilant when opening emails and clicking on links, even if they seem trustworthy.

What You can do to protect Yourself

The best way to protect yourself from cybercriminals is to be aware of their operating practices. Please don’t click on links in emails unless you’re sure they’re from a legitimate source.

When entering personal information into websites, make sure you’re on a secure website by checking for the HTTPS:// in the address bar. You should also ensure that you have up-to-date anti-virus software installed on your computer and run regular scans.

Following these steps can help keep personal information safe from cybercriminals. Different Ways Cybercriminals Get Ahold of Your Political Data

One of the most common ways cybercriminals get ahold of people’s political data is by sending phishing emails. Phishing emails appear to be from a legitimate source but are actually from a hacker or cybercriminal.

These emails contain links or attachments that, if clicked on, will install malware on your computer or device. This malware can then steal your personal information, including your political data.

For example, a cybercriminal might pose as a media member to get someone to share their political views. Or, they might pose as a pollster to get people to give them their contact information.

Once the cybercriminal has the information, they can use it to carry out further attacks or sell it on the dark web.

If the hacker has access to the database, they can extract any information they want, including political data. Data breaches can occur through malicious hacking or simply through careless mistakes made by employees of the organization.

One of the popular methods used by cybercriminals is phishing scams. These scams fool people into giving up their personal information by masquerading as trustworthy entities.

For example, you might receive an email that appears to be from your favorite candidate’s campaign.

Another common method criminals use is creating malicious websites and apps that collect people’s data. For example, you might stumble across a website that claims to offer an “exclusive” look at leaked campaign emails.

Once you input your email address to gain access, your information is collected and sold to the highest bidder. Alternatively, you might download an app that offers live updates on election results. However, this app is collecting data from your device without your knowledge.

One of the most common ways cybercriminals collect political data is through phishing attacks. As mentioned before, phishing is the process of sending fake emails or text messages in an attempt to get victims to click on malicious links or attachments.

These links and attachments often contain viruses that can infect a victim’s computer and allow the attacker to access their data. One example of a phishing attack that targeted political data was the 2016 Democratic National Committee email leak.

In this incident, hackers gained over 20,000 DNC emails by tricking employees into clicking on malicious links. In addition to phishing, cybercriminals also collect political data through malware attacks.

Malware is a type of software that is designed to damage or disrupt a computer system. It can delete files, modify system settings, or even steal personal data. Malware is spread through email attachments or by visiting infected websites.

One example of a malware attack that targeted political data was the 2017 German parliamentary elections hack.

Social engineering is manipulating people into actions that will benefit the attacker. This can be done through psychological techniques such as intimidation or flattery. Social engineering attacks are often used in conjunction with other methods, such as phishing or malware attacks, to increase the chances of success.

Protecting your personal information from cybercriminals is essential. Following these simple steps can help keep your data safe and secure. Cybercriminals are targeting political data more than ever before.

They know that compromising this information can have a significant impact on not just the victims but also the entire country. If you are responsible for safeguarding sensitive political data, it is essential to take all necessary precautions to protect it from cyber attackers.

We have extensive experience in helping organizations do just that.

Contact us today for Political Security Consulting, and let us help you keep your data safe and secure.