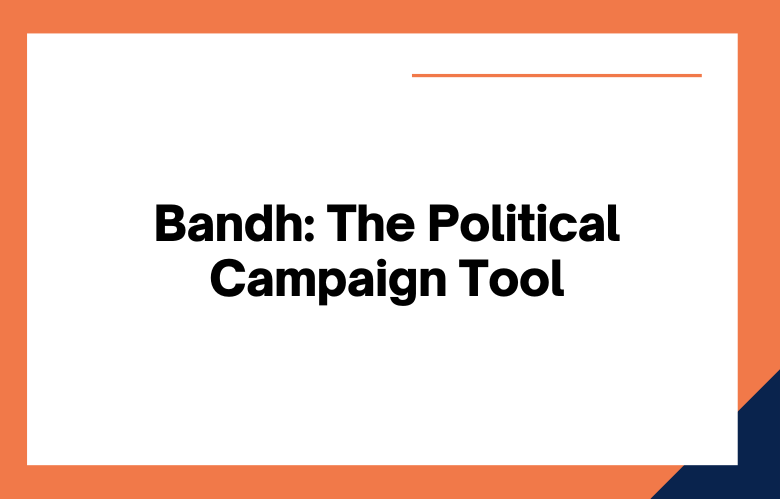 Bandh is a term used in India that typically refers to a general strike or protest organized by a political party. Over the years, many political parties have utilized bandhs as part of their campaign strategy. While bandhs can effectively draw attention to an issue, they also have serious drawbacks.

Let’s look at how political parties use bandhs and how they can affect the outcome of an election.

A bandh is a political tool political parties use to bring attention to their cause.

It is an imposed government shutdown, where all public services and transportation halt for a specified period.

It is used to protest or disrupt society’s normal functioning to draw attention to a particular issue.

In recent years, Bandh has become increasingly popular with political parties during elections to gain votes and bolster their campaigns. Let’s take a look at how this works.

What is a Bandh?

A bandh is an organized demonstration where political activists will call for people to stop working or engaging in commerce until their demands are met.

This can include blocking roads and railways, shutting down businesses, and other forms of civil disobedience.

It is typically used by those who feel that their grievances have been overlooked by the government or ignored altogether.

The benefits of using Bandhs for Political Campaigns

Political parties use bands to draw attention to their cause and rally support from potential voters who may share similar beliefs.

By organizing large-scale protests, they can show a significant public interest in their message, which can help them win elections or pressure the government to respond to their demands.

Using bandhs can help political parties gain media attention, amplifying their message and increase awareness of their cause among potential voters.

The drawbacks of using Bandhs for Political Campaigns

While bandhs can be practical tools for gaining visibility during election season, some drawbacks must be considered before using this tactic as part of a larger political campaign strategy.

For one thing, it has been known to disrupt public life and cause economic losses due to business and transportation services closures.

It has been known to incite violence between opposing groups which could further damage any chance of meaningful dialogue between them.

How Political Parties use Bandhs

Political parties often use Bandhs to draw attention to a particular issue or cause.

They will organize protests and strikes to disrupt everyday life and bring attention to their cause or candidate.

This can effectively draw media attention and rally public opinion behind their cause or candidate.

How Bandh is used in Political Campaigns

Political parties use Bandh in various ways during elections. The most common use is to shut down public services and transportation, which creates disruption and inconvenience for people throughout the country.

Depending on the situation, this can do on specific days or over extended periods.

A party may also use Bandh to rally supporters and spread its message more effectively than it could without it. For example, if they hold rallies while the rest of the city is shut down, they will have more visibility than if they kept them during regular times.

Bandh can pressure rival candidates or other political parties into taking certain stances or positions on issues important to the campaign.

Bandhs have both positive and negative impacts on society.

On the one hand, these disruptions can create awareness about issues that need government or citizens’ attention. Still, on the other hand, they can also lead to economic losses due to lost productivity and sales from businesses being closed down during these times.

It can create tension between different groups within society due to disagreements over whether or not bandhs should hold in the first place or their purpose.

The disadvantages of Bandh

While using Bandh can effectively bring attention to an issue, it can also have unintended consequences.

For example, when businesses and transportation services are disrupted, it can harm the economy and lead to job losses.

Furthermore, it can also alienate potential voters who may disagree with the demands being made by the protesting party.

The impact on Elections

Bandh can positively and negatively affect elections depending on how voters use and perceive them.

If they are seen as constructive protests pointing out valid issues that need addressing, this could help garner votes for the protesting party’s candidate or cause.

On the other hand, if they come across as disruptive tactics without any real purpose other than disruption, this could lead to voter backlash against the party involved in organizing them.

The pros of using Bandh for Political Campaigns

Using Bandh for political campaigns can be an effective way for parties to make their issues heard by the ruling government.

Often, these protests draw attention from national media outlets, amplifying their message and bringing it to more people’s attention than would be possible through traditional means.

Bandhs do not require much financial investment from the party organizing them, making them relatively straightforward (and cheap) to manage on a large scale.

The cons of using Bandh for Political Campaigns

However, several drawbacks are also associated with using bandhs for political campaigning.

For one thing, they can be disruptive and costly for businesses forced to close down due to the protests.

They can also lead to violence between supporters of opposing political parties or protesters and police officers trying to maintain order.

Depending on local laws, leaders of such protests may hold liable if things get out of hand or if economic damages occur due to the rally.

A bandh is an essential tool in Indian politics that political parties often use during campaigns to draw attention and rally public opinion behind their cause or candidate.

While it can be effective when used strategically, some severe drawbacks are associated with its use, including economic disruption and alienation of potential voters who disagree with its demands.

How well Bandh is utilized will dictate its impact on election outcomes.

In the end, Bandh, as a political campaign tool, is often abused by political parties to further their agendas.

This results in massive financial loss and inconvenience to citizens.

It is high time that people become aware of this and call for change.

We need to end this misuse of power and hold our politicians accountable for their actions.

Are you tired of your voice not being heard?

Is your candidate not getting the support they deserve?

Send us a message, and we will help you with your political campaign needs.

Bandhs are potent tools for political parties to use during campaigns, as they can generate a great deal of support from the public.

However, bandhs are also risky because they often lead to violence and property damage.

When appropriately used, bands can be an effective way to win votes and garner support from the public. Contact us today to learn more about running a successful political campaign. We specialize in political consulting and can help you develop a winning strategy that gets results.