How to use Drones for Political Campaign Advertising 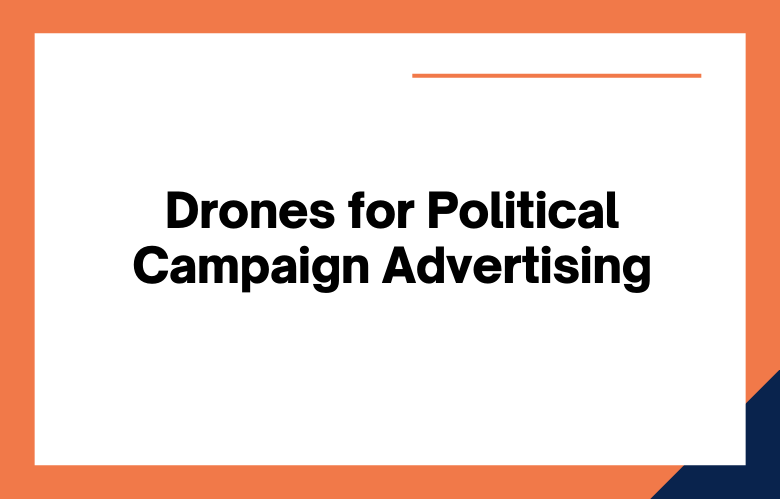 Drones for Political Campaign Advertising: Drones are a new and innovative way to advertise for political campaigns. They provide the opportunity to show the campaign’s message more creatively and memorably than traditional advertising methods like billboards or TV ads. This blog post will explore how drones can be used as an effective marketing tool for political campaigns, as well as what types of drone images make for great ads!

A drone is a flying robot, typically equipped with video and still cameras. They can be used to take aerial images of anything from people to buildings. Drones have been a popular tool for filmmakers for years now, but recently they’ve become an integral part of the political campaign process as well. In this post, we’ll explore how drones are being used in campaigns today and what that means for the future of politics!

What are drones, and how they work

Drones are a type of robot that flies in the air. You can use them to take pictures, videos, and even deliver things.

Drones are uncrewed aircraft. They can be used to take pictures or videos from above. Many people use them for aerial photography and videography, but they’re also helpful in search and rescue missions by scouting out areas that would be dangerous for humans.

Drones are uncrewed vehicles that can carry out most tasks. They have many applications in the areas of recreation, research, and military defense.

Drones are flying robots that are controlled and directed by a pilot or operator.

Why use Drones for Political Campaign Advertising

Drones can be used to get a birds-eye view of an area. They’re less expensive than satellite images, and they’re more reliable because the operators are on the ground.

If you want to attract more people and improve the public image, hiring a drone cinematographer is an excellent idea.

A political campaign is a significant event for people who are running to get elected. It’s an opportunity for them to reach out and connect with voters, but it can also be costly.

Drones are an innovative way to reach voters. They allow you to get close-up aerial shots, especially if the candidate is willing to fly them around.

How to Use Drones for Political Campaign Advertising

There are various ways to use drones for political campaign advertising. The first is the usage of drone footage. This can be filmed at different locations where you’re holding your rallies or getting iconic shots of the city/country.

Presidential candidates are using new technology to get their message out. Drones, or uncrewed aerial vehicles (UAVs), can be used for live streaming videos of campaign events and rallies.

Drones are a new addition to the political campaign media mix, but they’ve already proven their worth.

Drawbacks of Drone Usage in a Political Campaign

Future Trends in Drone Usage for Political Marketing and Advocacy

Benefits of Using Drones in a Political Campaign

If you want to be on the competitive edge from the crowd and garner attention in today’s fast-paced world, it pays off to think outside of the box. One such idea is using drones as part of your political campaign advertising strategy. They offer an eye-catching new perspective that can be used both inside and outside venues where events are taking place. Contact us if this sounds like something you might want to incorporate into your next marketing plan or event!

Political campaign advertising has always been contentious, but the rise of drone technology means that this will only increase. The benefits are enormous – you can get shots that people would never even think about taking before, and it’s an easy way for your message to go where no one else can reach. But there are also drawbacks; here at Drone Advertising Services, we’re experts in using drones legally and ethically, so contact us if you need help with political campaigning or want more information on how they work!