Why Does India need ‘One Nation, One election’? 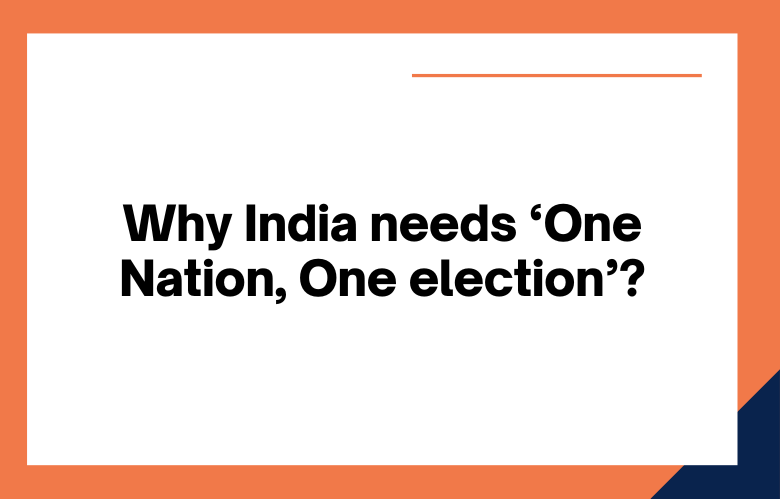 In a country as immense and diverse as India, it is not surprising that elections are often staggered over many weeks to allow all citizens the opportunity to cast their vote. However, some believe this system could be improved by adopting the ‘One Nation, One election’ concept.

Under this scheme, all elections would be held simultaneously, campaigning for just one month. So, why do some people think that India should adopt this system? Let’s take a closer look.

In a nation as diverse as India, voting takes many forms to ensure that every citizen has an equal say. While staggered elections have been successful, some people believe they can be improved by adopting.

In a country as immense and diverse as India, it is impossible to conduct fair and free elections across the nation simultaneously. Yet, that is what India’s Prime Minister Narendra Modi has proposed with his “One Nation, One election” campaign. Here’s why this idea is so important and why it deserves your support.

India is a country of over 1.3+ billion people, increasing. With such a large population, ensuring everyone has a voice in the government is daunting. One way to ensure that took all votes to implement ‘One Nation, One election.’

It would mean that all elections for all levels of government will take place at the same time. It would reduce bureaucracy and make it easier for the people to have their say in how their country runs.

The Indian Prime Minister, Narendra Modi, has long been a proponent of the idea of “One Nation, One Election.” It would mean that instead of conducting multiple state and federal elections throughout the year, there would only be one national Election every five years. It seems like a good idea – but does India need it? Here’s a look at the pros and cons of this proposed reform.

What is ‘One Nation, One election’?

One Nation, One Election is an initiative that aims to have state and national elections coincide.

The plan is to have state legislatures synchronize their election cycles with the federal government, so voters only need to go to the polls once every two years.

It seemingly simplifies voting and encourages more people to participate in our democracy.

This phrase is usually applied to describe the idea of having a national election in which everyone votes on the same day.

It is an initiative to have simultaneous elections for the Parliament and State Assemblies. The proposed change has ardent supporters as well as formidable opponents. Some believe that it will save time and money, while others are concerned about the feasibility of such a large-scale undertaking.

Why does India need ‘One Nation, One election’?

In a country as immense and diverse as India, holding multiple elections at different times can be a logistical nightmare. Pushing for ‘One Nation, One election’ makes sense from a practical standpoint.

But some critics argue that this push is motivated more by political convenience than anything else. They suggest that the ruling party wants to take advantage of its current popularity to try and push through this reform.

Whatever the motivations behind it, ‘One Nation, One election’ is a controversial proposal that is sure to have far-reaching implications for Indian democracy.

The country is undergoing multiple elections simultaneously, putting a strain on resources and staffing. One Nation, One Election would help to alleviate some of these issues.

One of the most significant issues India faces is its vast population. With over 1.3+ billion people, India is the second most populous country in the world. It poses several problems, one of which is holding elections.

India conducts elections separately for its national parliament, state assemblies, and local governments. It takes up a lot of time and resources. Holding multiple elections also means that some legislatures are not functioning for long periods.

The solution to this problem is ‘One Nation, One election.’ It would mean that all elections will take place at the same time. It would save time and resources and ensure that all legislatures function continuously.

Advantages of ‘One Nation, One election’

Disadvantages of ‘One Nation, One election.’

India is a vast country with a population of over 1.3+ billion people. Holding elections covering the entire government all at once would be challenging. Not to mention the logistical nightmare of coordinating voting booths, ensuring everyone has to access to a polling station, and counting all the ballots. There are also concerns about the security of the election process and how fair and unbiased it could be.

There are many valid reasons why India should not implement ‘One Nation, One Election.’ The immense size of the country and its population make it logistically very difficult to coordinate and manage. There are concerns about security and fairness that need to address before such a system can implement.

India is the world’s largest democracy, and with over 1.3+ billion people, it is also one of the most populous countries in the world. Given its size, it’s not surprising that Indian elections are complex affairs.

To make voting more efficient and reduce costs, Prime Minister Modi has proposed ‘One Nation, One election,’ which means all national, state, and local elections will take place simultaneously.

The proposal has generated a lot of debate and pros and cons of holding simultaneous elections. What do you think? Should India have a one-nation-one Election? Please send us a word in the comments below, or contact us for political campaign consulting services.