The Importance of Political Campaign Speeches 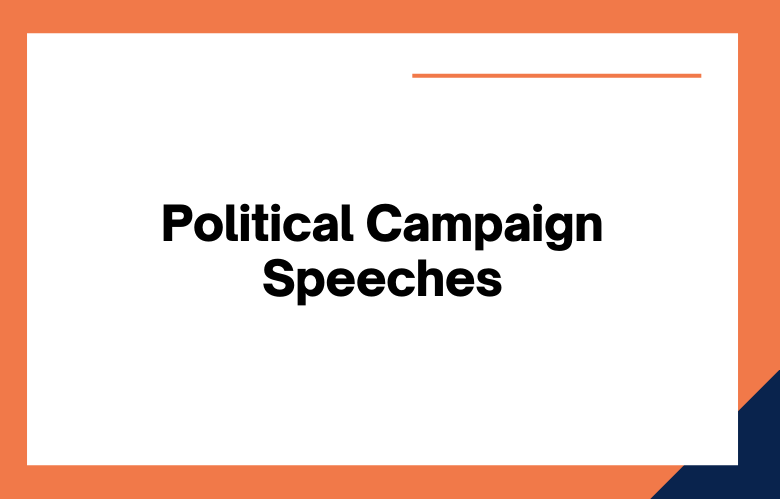 How vital are speeches in a political campaign? It’s hard to say since there are so many variables. But with the right words, a candidate can inspire voters, connect with them emotionally, and even motivate them to take action. So if you’re running for office, it’s crucial to invest time and effort in creating speeches that resonate with your audience.

What is a political campaign speech, and why are they important?

A political campaign speech is a speech that candidates make to get the public’s support. They are essential because, in a democracy, people use their right to vote for who they want to represent them.

A speech is a formal presentation of ideas. Campaign speeches are essential because they allow candidates to speak directly to the voters and change the outcome.

A political campaign is a speech a politician gives before an election. They are essential because they can help politicians win elections, which means the people elected will get what they want.

When politicians make speeches to voters, they try to convince the public that their ideas suit everyone. They also usually try to offend their opponents and talk about how terrible things would be if those people were in power.

A political campaign speech is given during an election that explains why the candidate thinks they should be elected. They explain what they will do if elected and why voters should vote for them.

A political campaign speech is an opportunity for a candidate to explain ideas and plans to the public. This is often done in front of many people, which can be nerve-racking and exciting!

The main goal of a political campaign speech is to persuade an audience like you and me. The speaker wants us to believe in him or his ideas so we can vote for him when the time comes!

A political campaign speech is a short presentation by candidates to persuade the public of their views. They’re essential because voting for officials with similar opinions means you agree, which will help improve the country’s policies.

In a political campaign speech, candidates often use rhetoric to persuade voters. Rhetoric is an artful way of convincing people through language.

How do speeches influence voters during election season?

Speeches can help sway voters’ opinions. For example, if the speaker is funny and engaging, their address will be more memorable. Funny lessons are also practical because humor helps people relax, making them more receptive to what’s being said.

Speeches influence voters during election season by giving them insight into their personalities and experience. To be effective, an address must also be delivered effectively with influential rhetoric.

Speeches are a powerful way to influence voters during election season. They’re effective because of all the emotion and passion that come with them.

Speeches are often used to convince voters that a candidate is the best for them.

Speeches are a necessity during election season to influence voters.

Speeches are one of the primary ways that candidates try to influence voters.

Speeches not only persuade voters; they also help candidates build a reputation.

Speeches are a great way to influence voters during election season because they allow the candidates to discuss their plans and ideas with citizens.

Speeches by candidates have a significant impact on voters during election season. They can sway opinions, mobilize people to vote for their pick, and help them make informed decisions.

What makes a sound or evil speech, and how can you make your lessons more effective?

A good speech makes an impact on the audience. How do you create this type of speech?

A good speech is based on evidence and facts, such as the ones given by scientists. Wrong addresses are not helpful to listeners or consist of insults directed at an audience.

A good speech is coherent and logical. It has an introduction, a central part, and a conclusion. These parts should be well connected with transitions (like, furthermore, or in contrast).

A good speech is engaging and exciting, and you must be passionate about it.

“To speak well, there is a need of three things: to choose good subjects, express thoughts worthily and distinctly, and deliver them with an agreeable voice; not so loud as to be heard farther than the speaker intends.”

A few key things make an excellent speech: confident, clear, concise, and passionate. If you can do all these things, your audience will be hooked!

A good speech has a precise, concise topic and is well-organized. A lousy address contains random information that isn’t organized logically.

What goes into making an excellent Political Campaign Speech?

An excellent political campaign speech needs to be a pitch for why you’re the best candidate. It should also be values-driven so that people know what they can expect from your administration and will thus feel motivated to vote for you.

Initially, make sure that your speech is well-written. You’ll want to practice it so much in front of a mirror that you memorize every word.

An excellent political campaign speech should be both inspirational and informative. It requires a lot of research and practice to give a good one.

To make a successful political speech, it is essential to have an organized plan. As well as having some good one-liners for applause.

An excellent political campaign speech must be engaging, unambiguous, and concise.

To make a good speech, you need to have a clear message. It should be concise but engaging, so the audience doesn’t get bored or distracted.

How can speeches be used to influence voters before an election?

Speeches can influence voters before an election by convincing them of the candidate’s plans, showing off their personality, and appealing to various groups.

Speech is a great way to convince people before an election. It’s one of the most potent ways you can persuade voters.

In many cases, an address may be even more critical than they say.

Speeches influence voters by providing facts that back up their campaign promises.

Speeches can influence voters before an election by showing them why you should be elected.

Political speeches can be some of a political campaign’s most essential and memorable moments.

They are opportunities for candidates to share their vision for the country, connect with voters, and make a case for why they should be elected.

If you’re looking to create a powerful political speech that will resonate with your audience, our team can help.

We have experience crafting speeches that inspire people to take action, and we know how to get your message out there effectively.