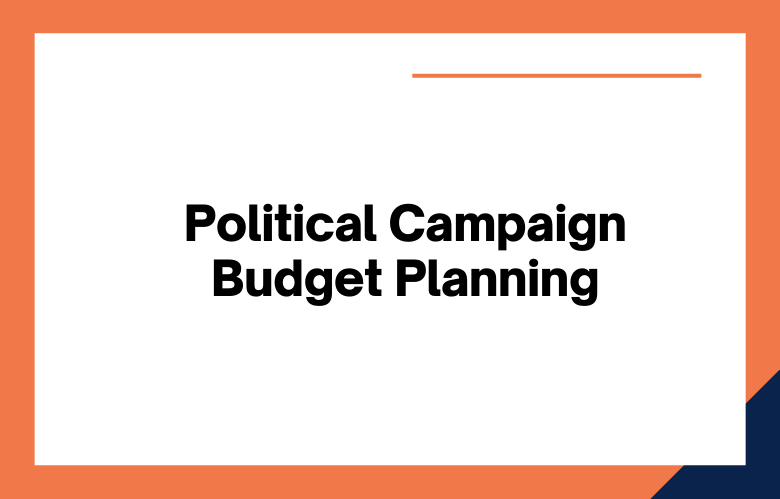 Political Campaigning Budget Planning: A political campaign budget is a process and plans to allocate money for the campaigning of a candidate. The use of funds allocated in the budget will be based on what type of outcome they want to achieve, such as winning an election or getting more people voting for their party. Many factors can affect how much money is needed to run a successful campaign, such as location, population size, climate, and even time zone.

As a voter, you may be wondering how much money is allocated to political campaigns. What are the different types of campaign budgets? This post will answer all of your queries and more!

What is a Political Campaign Budget?

Campaigns need a lot of money, and this budget is the amount they have to work with. To get elected or re-elected, they’ll spend it on advertising, travel expenses, and more.

You need to have a budget that will allow you to go out and get the people who will vote for you.

A political campaign budget is a plan that details how much money will be spent on the electoral campaign. The budget should cover everything from advertisements to travel expenses.

How much should your Political campaign spend on advertising

A political campaign needs to spend money on advertising.

Since elections are essentially a popularity contest, it’s essential to show your face as much as possible. You can do that by campaigning in public places like town temples and churches.

I would recommend spending about 20-30% of your budget on online advertising. This is because it’s a highly effective way to reach people who already have an interest in what you’re trying to accomplish.

Your opponent will benefit most from the Political Campaign Budget – you or your opponent.

Your opponent will benefit more because he has a lot of money. He can afford to advertise on TV, radio, and billboards.

The Political Campaign Budget will benefit you the most.

How to create an effective Political Campaign Budget with limited resources

The key to creating an adequate political campaign budget is to create a detailed plan. This should include all expenses such as staff, candidate travel, and other supplies needed for the campaign.

Campaigns can be costly, but if you create a budget with limited resources, your campaign will still be effective.

The importance of branding in political campaigns

A well-known brand is essential for a political campaign because it lets people associate the candidate and their movement with something, making voting more accessible.

There’s massive importance of branding in political campaigns. Many people vote based on logos and slogans, which means that the candidate with the best brand wins by default.

The branding of a political campaign is essential. It’s the first impression that people have of you, and it can be used to your advantage if done correctly.

The importance of branding in political campaigns can’t be ignored. How you present yourself to the voters is essential and will help you get elected.

Political Campaigns are always in need of more money. One of the most effective ways to raise funds is through political fundraising events.

Campaigning budget planning is an essential aspect of political campaigning. For a successful campaign to take place, you’ll need money.

The budget for the political campaign is being allocated to cover marketing, events, and advertising.

How to save money on political campaign costs

The best way to save money on political campaign costs is by using social media. The most significant expense for any politician is advertising campaigns. Still, Facebook and other social networks offer free ways to spread your message that can help you win an election.

There are ways to reduce the costs of running a political campaign. One of them is organizing events that will enable you to reach more people and generate interest in your cause, rally support from different groups that have common interests with yours, and meet.

You can spend money on a political campaign. However, it won’t help if your opponent spends more. If you don’t have the funds to keep up with them and still win, you pay only what is needed.

Ways to fundraise for a political campaign

What is a campaign budget, and what does it include

A campaign budget is a set amount that you spend to promote your product or service.

A campaign budget is what you allocate to your marketing efforts. It can include things like Google Ads, Facebook ads, etc.

A campaign budget is how much money you plan to spend running ads. It includes bidding, targeting, and actions that your competitors may take against you.

A campaign budget is how much money you will spend on your online ad. It’s important to note that it’s not just the ads but also people working for you, like staff and social media specialists.

Why do we need to know the political candidate’s budget?

It’s essential to know the political candidate’s budget because they spend money on crucial things, like education and health care.

Every citizen should know about the budget of presidential candidates not only to give them support but also because it’s a right and obligation for us to be informed.

There are things to consider when you are trying to find out who is running for office. One of these is their budget, so you can see how they plan on getting the money needed to run a campaign.

It is essential to know what a political candidate’s plan for education is because not all schools have the same resources.

The most trending ways to raise funds for a political campaign

One of the most effective ways to raise funds for a political campaign is to ask everyone you know. It’s very effective because if they like your cause, they’ll be happy to donate.

I think the most effective way of raising funds for a political campaign is by hosting an event. You get to meet potential donors in person, and it’s easier to close the deal.

You can host a fundraiser party. A benefit concert is also an excellent way to raise funds for your campaign.

When considering what your political campaign budget is, it’s essential to consider the size and scope of your goal. What do you need? Do you want a small local race that doesn’t require much in terms of money or resources? Or maybe your eyes are set on running for president and will need to raise millions.

The critical thing to know about setting up a budget is knowing how much time and effort you’ll be putting into campaigning so that once everything starts rolling, there aren’t any surprise expenses along the way!

If this sounds like something worth exploring but don’t have time at the moment, reach out today for Political Campaign Consulting services from our team, who can help get things started while freeing up some of your values.