The Dos and Don’ts of Political Campaigning in India 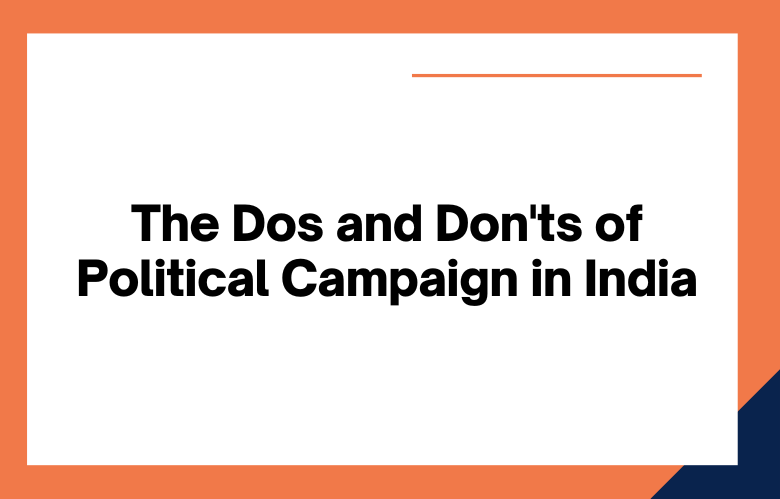 Political campaigning in India is a complex and often misunderstood beast. They are an essential part of the democratic process but can also be a minefield for the unwary. This blog post will let you know some of the dos and don’ts of campaigning in India.

The dos and don’ts of campaigning in India

Do: Keep your message upbeat

One of the most important things to remember when campaigning in India is to keep your message optimistic. This is not the time to get into negative or divisive rhetoric. Stick to notes that will resonate with the majority of voters and focus on issues that are important to them.

Don’t: Get too personal.

Another essential thing to remember when campaigning in India is to avoid getting too personal. Now let’s focus on the issues and not on attacking your opponents. Remember, you want to win over the voters, not alienate them.

Do: Focus on the issues.

As we mentioned before, one of the most important things to remember when campaigning in India is to focus on the problems. This is not the time to get sidetracked by personal attacks or hostile rhetoric. Keep your eye on the prize and stay focused on what’s important to the voters.

In today’s day and age, it would be impossible to run a successful campaign without utilizing social media. Make sure you have a strong presence on all of the major platforms and that you are regularly updating your content. Social media is a great way to reach out to potential voters and get your message out.

Do… Research Your Constituency

Before you begin campaigning in earnest, it’s essential to take some time to research the area you’ll be running in.

What are significant issues faced by your constituents? What do they care about? Do they want to see change? By understanding the needs and concerns of the people you’ll be representing, you can craft a message that resonates with them and gives them a reason to vote for you.

Although most of India’s population is urban, don’t make the mistake of thinking that rural areas are unimportant.

Many of the country’s most pressing problems—such as poverty, illiteracy, and poor infrastructure—are concentrated in rural areas. To build support for your campaign among all Indians, you must focus on knowing the needs of rural residents and urban dwellers.

Do… Talk about corruption

Corruption is a thorn in the side of Indian politics, and it’s an issue that voters are passionate about. You’ll be one step ahead of opponents if you’re seen as someone committed to fighting corruption.

Promise transparency in your dealings and make it known that you’ll work to root out corruption wherever it exists.

In India, which is populous and diverse, there are bound to be some controversial issues dividing the populace—religious tensions between Hindus and Muslims or disagreements over how best to improve infrastructure.

When campaigning, it’s essential not to take sides on these issues. Instead, focus on common ground and finding solutions that will benefit everyone.

A middle-of-the-road approach will show voters that you’re interested in what’s best for India rather than pandering to one group.

Do: Focus on the issues.

As India is large and diverse, there are bound to be various issues that are important to different people. When formulating your campaign platform, it is essential to focus on the most critical issues for your constituents.

By aiming at the issues that matter most to them, you will be able to better connect with voters and earn their support.

While national elections get all the attention, it is essential not to overlook the importance of local races. In India, local elections are often just as hotly contested as national ones.

Furthermore, winning a provincial election is often a stepping stone to higher office. As such, it is essential to put forth a strong effort in local campaigns if you hope to succeed in national elections.

Do: Use technology to your advantage.

In today’s world, technology is most important than ever before. Running a successful campaign means utilizing technology to your advantage.

From online platforms like Twitter and Facebook to data-driven tools like Google Analytics, there are various ways to use technology to conduct more efficient and effective campaigns. Utilizing technology will help you stay ahead of the competition and better connect with voters.

Mechanization is an integral part of any modern campaign. It should not be relied upon exclusively. There is no substitute for good ancient human interaction regarding campaigning.

Voters want candidates who they feel they can connect with on a personal level. Make sure to shake plenty of hands and kiss plenty of babies during your campaign if you want to win over voters.

Reach out to voters at the integral level by campaigning in their neighborhoods and villages. This will show them that you’re invested in their community and care about their issues. In addition, it’s an excellent opportunity to hear directly from voters about their concerns.

In today’s interconnected world, it’s essential to maintain a strong presence on social media. This is a fact in India, where over half a billion are active internet users. Use social media to share your campaign message, engage with voters, and build support for your candidacy.

Do… Stay disciplined on the campaign trail.

Campaigning can be grueling, but staying focused and disciplined throughout the process is essential. This means avoiding negative campaigning, staying on message, and refraining from personal attacks. By visiting positive and focused on the issues, you’ll show voters that you’re a serious candidate worthy of their support.

Winning an election takes hard work, so don’t be tempted to take shortcuts. This includes things like bribing voters or paying for positive media coverage. Not only unethical, but it will ultimately backfire on your campaign. Voters want honest and transparent candidates, so make sure your campaign reflects those values.

Do: Know your audience.

This may seem easy, but you would be amazed how many political campaigns pander to the wrong audience or try to be all things to everyone. It is essential to know who you are speaking to and what issues matter most to them.

Do: Have a clear message.

Once you know your target audience, you need to craft a message that speaks to them directly. That message should be clear, concise, and easy to understand. It should also be something that differentiates you from your opponents.

Voters have the right to know why they should vote for you, not someone else. So make sure your message is something that will resonate with them long after they leave the polling booth.

Do: Use technology wisely.

In today’s digitized world, it’s more important than ever to utilize technology in your campaign—but it’s just as important to use it wisely. The social media platform is one of the only ways to connect with potential voters, but only if used correctly. Spamming people with campaign ads or regurgitating the same talking points ad nauseam will only alienate people from your campaign.

Instead, use social media platforms to start a dialogue with potential voters about the issues that matter most to them. Ask questions, offer solutions, and, most importantly, listen to what people say. You might seek something important along the way.

Running a political campaign in India is no easy task. However, following these simple dos and don’ts can set you up for success. Do your research, discuss corruption, and avoid taking sides on controversial issues.

And most importantly, don’t forget about India’s rural residents—they deserve your attention as much as anyone else does. By following these guidelines, you can run a campaign that will appeal to voters from all corners of this great country.

As you can see, there are tiny things to remember when campaigning in India. By following these simple tips, you can ensure that your campaign is successful. Indian politics is heating up, and the time to act is now. If you want to get involved in campaigning in India or gain a better understanding of the political landscape here, contact us.

Our team has experience working in Indian politics, and we can help you make the most of this exciting and ever-changing market. With elections just around the corner, there’s no better time than now to jump into Indian political consulting!