Political Opinion Polls and Election Survey: A Brief Explanation of Polling and Surveys 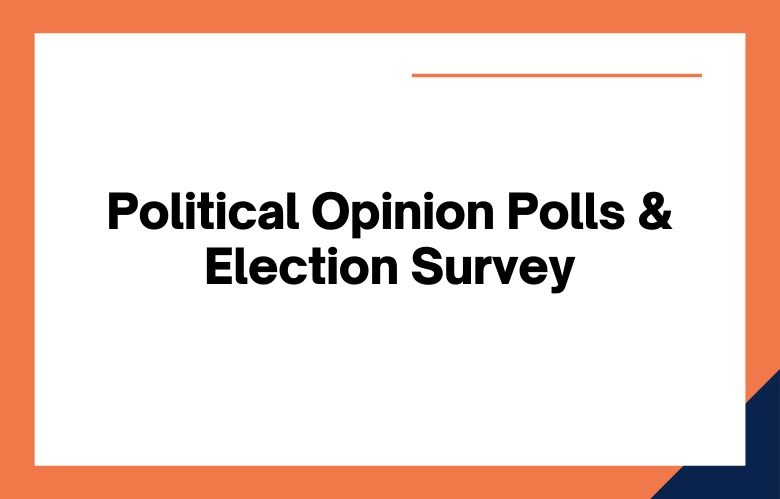 Political opinion polls and election surveys can be confusing topics for those who are unfamiliar with them. Polling is the process of collecting information from people on their preferences or attitudes. In contrast, an election survey is usually conducted by phone or online to create a snapshot of public opinion at a single point.

There are many different types of polling and survey methods that consider various factors such as age, income, gender, race, etc., which may lead to specific results due to how voters answer questions during these polls.

The intention of composing this post is to provide a brief explanation of political polling and surveys so you will have a better understanding when reading about them in the future.

Political opinion polls and election surveys are a way for organizations to gauge the opinions of the general public. These surveys provide valuable insight into how individuals feel about specific issues, like what they think about immigration or healthcare.

Polls take these feelings and create statistical data that can be used by various entities to make decisions on future policies.

This article will explore the basics of political opinion polling and election surveys to understand this topic better.

Specifically discussed will be essential terms, why polling is done, when it’s done, who does it, what information is collected in a poll, as well as some common criticisms of polling techniques themselves along with their strengths & weaknesses.

What are Political Opinion Polls?

Political opinion polls are surveys conducted to collect data about the opinions of a population. This is done by asking questions to a Random Sample, which can be people or households.

Political Opinion Polls are surveys of public opinion conducted by interviewing a sample of people who represent the entire population. For example, information from these polls is used to decide which political party will be in charge.

The information gathered from polls is used to analyze and predict trends in political opinions. These are used to help shape policy decisions.

Political opinion polls are surveys that ask a question to get an answer to something. They’re used by the government and also by news organizations.

What is an Election Survey?

An election survey is a form of market research. It’s typically used to determine the popularity of politicians, political parties, and issues such as taxation or abortion rights.

An election survey is, well, a survey done by people who want to participate in an upcoming election.

An Election Survey is a questionnaire that collects information from citizens about their political views so the government can make better decisions.

An Election Survey is a form of market research and an essential part of running an election campaign. It collects information about your voters, like how old they are or what issues matter to them.

An election survey is a poll that asks questions concerning elections and voting. They are usually conducted by politicians, political parties, interest groups, or market research companies during the run-up to an election to gauge public opinion and predict results.

Sampling methods are the techniques that you use to select a sample of people, places, or things for study in surveys.

Sampling methods are used to determine the makeup of a population. There are different types of sampling, but the random sample is best for political polling since it’s unbiased and fair.

Whatever your political views are, you still need to vote. But how do you know which candidate is the best? The most common method for finding out who will win an election is through polls.

The most common sampling method in political polling is based on telephone surveys. This process starts by determining the population of interest, which may be a subset of a larger population.

Why is it important to know what the public thinks before voting on an issue or candidate?

It is essential to understand what the public thinks about an issue before voting for it because you want them to respect your decision.

It’s important to know what the public thinks about an issue before voting on it because, otherwise, a politician could be making decisions that people disapprove of.

Before voting on an issue, it’s essential to know what the public thinks about it. This is because if the majority of people are for or against something, then you can make more confident decisions when making your vote.

The reason why voting results are released to the public is to ensure that votes were not tampered with.

It is important to know what the public thinks before voting on an issue because it helps you make a more educated decision based on facts.

Why are opinion polls crucial for the government?

Public opinion polls are important for the government because they can decide how much support there is for a particular law.

Polls are essential for the government to make informed decisions and prove its legitimacy.

Why do polls matter in an election?

Polls are essential to an election because they give us a sense of where the candidates stand. They also tell us who will be elected, but remember that polls aren’t always accurate.

Polls are an integral part of any election cycle. They help candidates understand what’s on people’s minds and how they’re feeling about issues.

A poll is an opinion survey. That can do by taking a sample of the population and asking them a series of questions. This will help you determine how everyone else feels about certain things, like elections, showing who people support.

Polls do a lot to help voters understand the issues that matter most in any election. Polls are the best ways for candidates to learn about what people want from their government.

What Does Your Political Alignment Mean?

When it comes to politics, your alignment means a lot.

Politics is one of the most controversial subjects in society. The political alignment system is used to classify people according to their stance on several issues, as well as how they see the government’s role regarding them.

One of the most important things is to be an informed citizen and understand where you stand politically. Through this, you can make more informed decisions in the future.

The importance of taking polls seriously.

Taking polls seriously will tell you what other people are thinking and planning. That way, you can adjust your strategy accordingly.

It’s important to take polls seriously because they give us an idea of what people think.

Many people think that it’s not essential to take polls. However, the stats they provide are necessary for governments and businesses, which can’t make decisions without this data.

What is more important than taking the polls seriously? People who do not take them seriously suffer from a lack of meaningful information. For this reason, people must vote because it helps make democracy work better.

It is important to track political opinion polls because they can help in making government decisions.

Political opinion polls are crucial because they serve as a medium of expressing the views and feelings of individuals. They also help in determining whether or not candidates have been effective in their campaign promises.

Political opinion polls are a great way to communicate with people.

Political opinion polls are conducted to help the government and other organizations decide how to act. A survey is given, questions are asked, and responses from individuals give insight for future decisions.

Polling is a systematic way of collecting data from people. Polls are often used to predict elections, measure public opinion on political matters, and test the popularity of politicians or policies.

Political opinion polls and election surveys are standard tools used to predict the outcome of an election, but what about personal branding for politicians or political parties? We know that polling is important in politics, so why not apply these principles when building your brand identity. A strong politician needs a consistent message with core values they believe in.

This makes them appealing to potential voters and new supporters who want someone they can trust and understand. It’s time you take control of your data by taking stock of where you currently stand on the most critical issues facing our global society.

Politicians are always looking for ways to improve their public image. A personal brand is the best one that reflects who they are and what they stand for. A politician’s branding should not be all about the campaign, but rather it should reflect how they will lead once in office. Is your political party struggling with establishing its own identity? Let us help you create a compelling candidate persona so voters can see exactly who you represent before casting their vote!