Political Trends that Reveal the Value of Digital Marketing 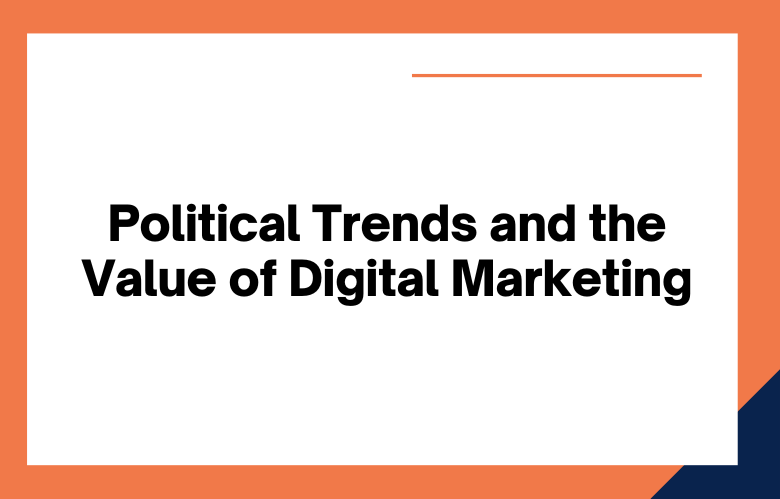 The internet has drastically changed the political landscape. In the past, political campaigns relied heavily on canvassing and door-to-door campaigning to spread their message. Nowadays, candidates are using digital marketing strategies to reach out to voters where they are spending the majority of their time:

All of these factors contribute to a more efficient and effective political campaign.

Micro-targeting is one of the most powerful tools in a political party’s arsenal. This uses big data to identify and target small groups of potential voters with personalized messages.

For example, suppose a party has determined that a particular group of people is particularly interested in environmental issues. In that case, they can target that group with ads and content addressing those issues.

Microtargeting effectively reaches potential voters because it allows parties to craft custom messages relevant to each voter’s interests. Additionally, because microtargeting relies on big data, it can be used to target large numbers of people effectively.

The Rise of Social Media

Social media also had a significant impact on the way that political campaigns are run. In the past, candidates relied on traditional communication methods, like TV ads, news interviews, and print publications, to reach potential voters. But now, with social media, candidates can directly communicate with voters and gauge their reactions in real time.

Not only that, but social media also gives campaigns a platform to respond directly to their opponent’s attacks. In the past, if an opponent made an attack ad or said something negative about a candidate in an interview, there was little the candidate could do in response other than hope that voters would forget about it by Election Day. But now, thanks to social media, candidates can quickly and easily refute their opponents’ claims and set the record straight.

The Decline of TV News viewership

As social media has risen in popularity, TV news viewership has declined steadily over the past few years. According to a Pew Research Center study, only 14% of Americans aged 18-29 say they regularly watch TV news.

This trend presents a challenge for political campaigns that rely heavily on TV ads to reach voters. With fewer and fewer people watching TV news, depending on this medium to get potential voters is becoming less and less effective. That’s why it’s so crucial for campaigns to focus on building a solid online presence through digital marketing instead.

The Increase in Mobile Device Usage

People are using smartphones as their primary means of accessing the internet; according to a recent study by Pew Research Center, 77% of Americans aged 18-29 say they use their smartphones most often when online.

This increase in mobile device usage presents a unique opportunity for political campaigns willing to invest in developing a robust digital presence. Thanks to technological advances, it’s now possible to target potential voters with highly personalized ads based on their interests and location.

For example, if you’re running for local office, you can use targeted ads to reach voters in your district who are likely to be interested in your candidacy.

The Rise of Social Media as a Platform for Political Discourse

In the past, the only way for constituents to connect with their representatives was through traditional channels like television, radio, and print media. However, with the rise of social media, members now have direct access to their representatives 24/7. As a result, politicians and their staff have had to adapt their strategies for engaging with constituents in this new digital landscape.

The increasing importance of data-driven decision-making.

To serve their constituents, politicians and their staff need access to reliable data. With the vast amount of online data, there has been a shift toward using data-driven decision-making in political circles. This means politicians are turning to digital marketing firms to help gather and interpret data.

The Rise of Targeted Political Advertising

Due to the sheer volume of online information, it has become increasingly difficult for politicians to reach potential voters through traditional means like television advertising. As a result, there has been a shift towards targeted political advertising online. This allows politicians to use data gathered from digital marketing firms to target potential voters with laser precision. This effectively reaches voters who might not be achieved through traditional means.

The Power of Email Marketing

While social media might be dominating the digital landscape, that doesn’t mean that email marketing has lost its efficacy.

The Importance of SEO

A common misconception of digital marketing is that it’s about creating flashy content that will go viral on social media. While creating viral content can undoubtedly be a part of your campaign’s strategy, it shouldn’t be your only focus—especially if you want your website to rank highly in search engine results pages (SERPs). This is where SEO comes in.

The Importance of Social Media Platforms in Political Campaigns

In the past few years, we’ve seen time and time again the power of social media in political campaigns. From Barack Obama’s 2008 campaign, which was widely credited with pioneering social media’s role in politics, to Donald Trump’s use of Twitter to connect with voters, there is no denying that social media can be a powerful tool.

The Rise of Digital Advertising

Thanks to technological advances, today’s campaigns have more options than ever regarding advertising. From targeted Facebook ads to Google AdWords, there are several ways to ensure potential voters see your message. And with more people spending time online than ever, there is a huge opportunity to reach voters where they are with your message.

The Need for a Strong Online Presence

With so much activity happening online, it’s more important than ever for political campaigns to have a strong presence on the web. This means having a website that is up-to-date and informative, as well as active social media accounts that provide voters with timely updates about your campaign. By having a dynamic online presence, you can reach more voters.

Digital marketing is no longer an emerging trend; it’s now essential to any successful political campaign. Using digital marketing strategies, campaigns can reach out to potential voters where they spend most of their time: online. And finally, digital marketing allows campaigns to track their progress and see which strategies are working and which need to be tweaked.

All of these factors contribute to a more efficient and effective political campaign.