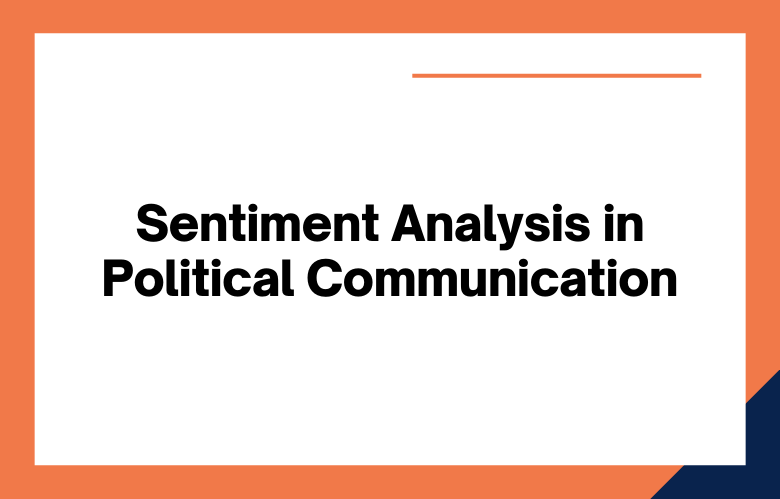 The role of sentiment analysis in political communication is an increasingly important aspect of the current discourse. As elections continue to grow more contentious and divisive, the need for a better understanding of how public opinion shifts as people voice their opinions on social media becomes critical.

Sentiment analysis can provide insights into the public’s thoughts and feelings about politicians and policies and other aspects such as safety, education, or healthcare. It provides a window into what is happening with a society that no one else has access to—like never before.

We will discuss how sentiment analysis plays a role in politics and why it matters now more than ever.

What is Political Communication?

Political communication refers to the art of persuasive speaking and writing. It is also often used as a synonym for propaganda, an attempt to influence public opinion on political issues using techniques that blend emotional and rational appeals.

Political communication is the process of transferring information from a source to a receiver through various channels. In this way, it’s important because it can influence people’s opinions and beliefs.

Political communication is the study of how information and ideas are spread to influence political action.

Political Communication is the study of how to persuade people and why political arguments are made.

Political Communication is a branch of communication studies that focuses on the media coverage and political discourse surrounding politics.

Political communication is a branch of communication that studies how citizens and organizations generate, transmit, and receive political messages.

Using sentiment analysis to predict the opinion of the public

There are many ways to do this, but I think the best way is by doing sentiment analysis because that allows you to quantify how people feel about something.

Sentiment analysis is a method of analyzing people’s reviews of products, services, brands, etc. These evaluations predict public opinion by using algorithms that help detect different emotions in the reviews.

Currently, several businesses use sentiment analysis to predict the popularity of their products.

The public’s opinion can influence market prices, but it’s hard to obtain an accurate read on what people feel about something. Sentiment analysis is the solution to problems by identifying positive and negative emotions in texts.

Using text analysis to understand the attitude of the public is an excellent way to market products.

One of the significant ways this is being done is by using sentiment analysis on articles.

The application of sentiment dynamics to understand how opinions change over time.

Sentiment dynamics analysis is used to predict an audience’s emotion based on the moods expressed in a set of positive/negative words or phrases collected from users.

The idea of this study is to quantify changes in a series of texts using the sentiment algorithm. The main goal is to establish a method that can be used to measure variations in political speech on social media.

We’ll briefly discuss the various approaches to sentiment analysis. We’ll mention a few of the most popular techniques that people use.

Many people are interested in analyzing the tone of political speeches, but it’s challenging to get a system that will work well with the text.

The sentiment in the political text can often be challenging to measure. This is because opinions on politics are pretty varied and thus can produce a wide range of responses from people.

The issue in cognitive science is predicting people’s reactions to different news articles. While it’s easy to predict how happy or sad they will be, accurately measuring their sentiment has proven more difficult.

The sentiment of a text is the emotional attitude that it communicates.

A negative sentiment dictionary is essential for detecting and understanding the context of unhappy or unsatisfied customers.

It’s hard to create a dictionary of negative sentiment words. Some emotions are ambiguous, and it isn’t easy to find examples of them in large volumes.

Sentiment analysis is a process of determining whether the test is positive, negative, or neutral.

One way to improve sentiment analysis is by building a dictionary of words associated with negative sentiments. It can be done in different ways, for example, through crowdsourcing or computational linguistics.

Sentiment analysis is the art of determining the attitude expressed by a speaker or writer in a piece of writing.

A great way to ensure all your articles are positive is by making a negative sentiment dictionary. It’s straightforward and doesn’t take long at all.

This article intends to define the development and identification of political sentiment through social media, specifically Twitter. It will explain how researchers can use machine learning techniques to train a system to identify political tweets with sufficient accuracy for them to be helpful.

It is essential to understand the political trends in countries. Different cultures, demographics, and social media platforms can provide insights into how people feel about political situations. Sentiment Analysis tools are perfect for this task due to their capability of processing large volumes of texts.

Applications of Sentiment Analysis in Politics

Politicians must be honest and also represent the views of their constituents. One way they can do this is by listening to what people are saying about them on social media. Sentiment analysis software allows users to gauge public opinion.

One of the most important uses for sentiment analysis in politics is to monitor social media trends. Many people will say bad things about a political figure; it’s easy to understand what they’re feeling and how their feelings might change over time.

Sentiment analysis is used to analyze the emotional state of a large group of people. It can measure their attitudes, opinions, and emotions about specific topics or issues at any given time.

Sentiment Analysis is used in politics to get an idea of what the citizens think about political decisions. It can be used during elections, special events, or for everyday decision-making.

Sentiment analysis in politics is essential. I feel that it will help me understand people’s general opinions, which will allow me to serve them better.

We highlighted the importance of sentiment analysis in political communication. We were able to see that a lot can be learned by analyzing what people are saying about candidates and their campaigns on social media platforms like Facebook and Twitter.

Social media provides us with an unprecedented opportunity for citizens to express themselves openly without censorship or outright attacks from opposing camps.

Political professionals should take advantage of these new opportunities to understand how constituents feel about their candidate’s policies or campaign promises. If you’re excited about learning more about our services, please get in touch with us today!

We’ve discussed how sentiment analysis can be used to understand political communication better.

We hope you found the information in this article helpful and would love to hear from you about your thoughts on these issues.

If you have any queries with a sentiment analysis project, please contact us for more information!