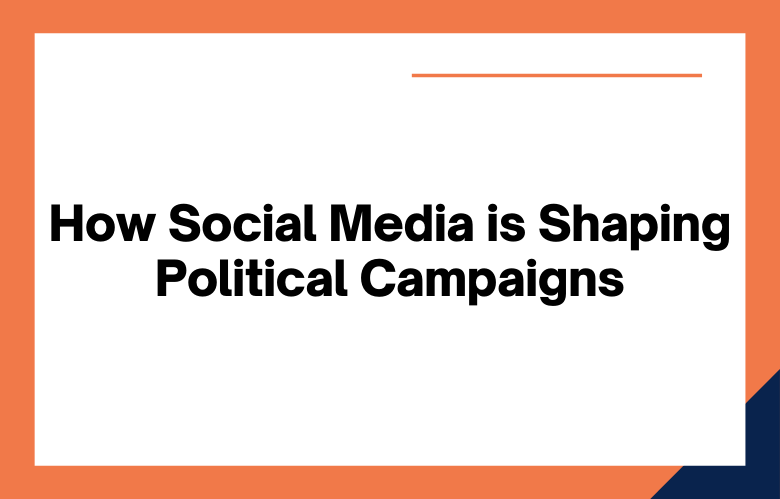 Political campaigns are evolving to meet the demands of a changing world. The growth in popularity of social media has changed how candidates campaign for office and interact with voters.

This post will explore how social media can be used in political campaigns, both as a tool for campaigning and interacting with voters.

Social Media is quickly transforming into not only an integral part of our everyday lives but also an increasingly influential fixture in the way we vote.

The way that social media has shaped the political landscape is undeniable. Social media platforms have given people a voice, and in some cases, it’s allowed them to be heard for the first time.

In addition, social media allows politicians to speak directly to their constituents without any filter or intermediary bias.

There are many ways in which social media is shaping politics today. It allows candidates and elected officials alike to reach out and connect with voters personally- whether they’re on Twitter or Facebook, there are countless examples of how this tool can work as an effective campaign strategy.

Further still, campaigns have used these tools as mechanisms through which they collect data from potential supporters- information that helps inform future decisions about voter outreach efforts.

With the rise of social media, it is now possible for political campaigns to reach massive audiences and get their messages out to a wide range of people.

However, with this new power comes great responsibility. Political campaigns need to be careful about what they post on social media not to violate campaign rules or do anything that could harm the candidate’s reputation.

This blog will discuss how social media shapes politics today and provide tips for candidates when using this powerful tool.

There’s no wrong with the usage of social media to express your political views. It can be a great way to get the word out and meet new people.

There is a lot of disinformation on social media. We have to be careful when we read articles before voting because they can be biased and side-effected.

Social media has changed the way politics is done. Twitter and Facebook have become essential ways for politicians to reach out to their audience and connect with voters, but that also means people can hold them accountable in real-time.

Even though social media has been deemed a political tool, it should not be used. Instead of using it as a place to air grievances with each other and politicians, we should use it for what it was created for to connect.

The Role of Social Media in Political Campaigns

Social media is one of the trending tools for political campaigns because it is a great way to spread information about your campaign and connect with the public.

One of the most important things to a political campaign is social media. It can be used in several types, like fundraising, getting votes, building your brand, and so much more.

Social media has changed a lot of things, and political campaigns are one of them. Politicians can now reach out to millions of people at once using sites like Twitter or Facebook.

Social media has changed the way political campaigns are done.

The most important thing to do when running a successful political campaign is to be able to reach the largest audience. Social media has allowed all candidates access to thousands of new voters every day.

Social media has completely changed how political campaigns are run. Campaigns now use social media to reach out to a large audience at once and then use other strategies such as door-to-door campaigning or personal phone calls for more details.

What are the pros and cons of using social media for campaigning, and how can it be used effectively

For political campaigns, using social media to spread the message is extremely useful. Social media can reach a large audience all at once, and it’s a great way to engage with voters. However, when campaigning for yourself or another person.

While there are a lot of people that do use social media platforms for the campaign, the results aren’t always ideal. It’s great for spreading the word about issues, but it can also backfire if someone else posts something negative about you on your profile.

Social media has become an essential part of the political campaign process. Campaigns use it to raise funds, spread their message, and get support from voters.

The most significant advantage is that it’s a great way to interact with voters. However, it might support if you were careful not to alienate your audience because people don’t always respond well to being marketed.

Social media is the best way to communicate with people, but you risk accidentally saying something that could turn into an internet meme. However, if you’re careful and use it well, it can be gratifying.

Social media plays a vital role in the political process. It can even affect elections because now candidates can reach out directly to voters and receive feedback on their policies.

Social media is essential in the political process because it gives people a voice. The internet helps to inform and educate citizens on current issues, leading to voting. Without social media, our participation would be limited to only those who.

Social media is a significant player in politics. It lets us see candidates’ views, plans, and even what they’re doing daily.

Social media is transforming the way we interact with each other, and in 2016, candidates are increasingly incorporating social media into their campaigns.

Social media is a significant way to get your message out and attract voters. However, it’s important not to rely on social media because it can be challenging for some people to access this information.

Social media allows politicians to show a more personal side. It’s also an effective way to get the news out and share information that they wouldn’t usually reach their constituents with traditional methods.

Social media can allow politicians to reach out and communicate with their constituents while also allowing voters to ask questions or voice concerns.

With the help of social media, politicians can reach out to voters in a meaningful way. It’s easier than ever for candidates to connect with constituents and spread their ideas all over the internet.

You must know the best practices when it comes to political, social media campaigns. By leveraging these best practices, your campaign can have a higher chance of success.

The best practices for political, social media campaigns include using a candidate’s slogan, keeping the messaging positive, and avoiding attacks.

In the survey conducted by the Reuters Institute for the Study of Journalism, about 90% of social media users use Facebook as their primary source of political news. However, Twitter is not far behind, with close to 70%.

One of the best things about political, social media campaigns is their ability to get straight to the point. One of the worst parts, however, is when they use buzzwords that may mean little or nothing to your audience. To avoid having such a problem.

The rise of social media and its use in political campaigns has been a hotly debated topic for the past few years. Social media provides both benefits and challenges to politicians as they try to reach their audience through it. But some argue that there is no substitute for meeting people face-to-face, which can’t be done on social media. As this trend continues into the 2022’s, we’ll have an opportunity to see how these arguments play out – so stay tuned!