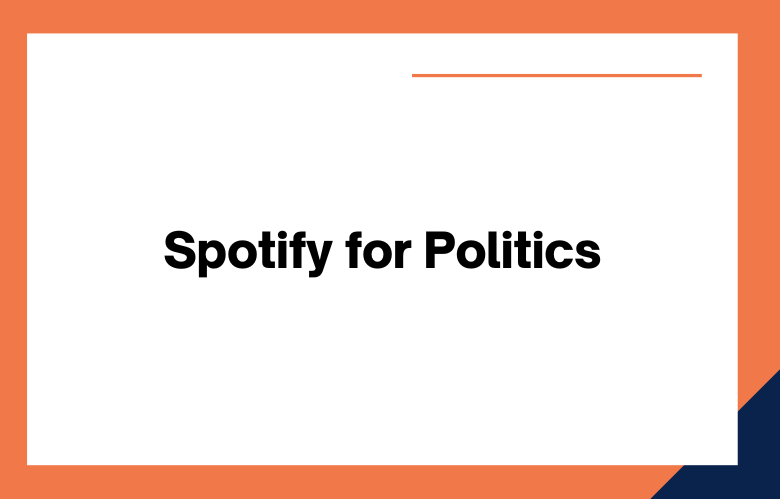 Spotify has become a powerful tool for social media marketing, allowing campaigns to target specific demographics with laser precision. We’ll explore how political campaigns can use Spotify to reach potential voters and get their message across in a way that is both effective and efficient.

Spotify has more than 200 million users worldwide, making it a go-to platform for political campaigns looking to reach a broad audience. And with Spotify for Politics, campaigns can tap into the power of music to connect with potential voters emotionally.

And because Spotify collects data on its user’s listening habits, you can be sure that your ads are being seen by the people you want to reach. In addition to targeting specific audiences, you can also use Spotify to create custom playlists that feature your candidate’s speeches, policy positions, and more.

These playlists can be shared on social media and used to cultivate a groundswell of support for your campaign. Don’t forget to use Spotify for Politics to promote your candidate’s events.

You can create custom event pages that include all the relevant information about your candidate’s upcoming appearances. You can embed a ticketing widget so potential attendees can buy tickets directly from your carrier.

Spotify’s new “Social Listening” feature allows users to share music and podcasts with their friends and followers and see what their contacts are listening to in real-time. This presents a unique opportunity for political campaigns to reach potential voters with whom they’re already spending a significant amount of time – on social media.

How Spotify Can Help Political Campaigns

Spotify provides political campaigns with the ability to target potential voters with ads that are relevant to them. For example, a campaign could target voters who live in swing states and are between 18-29.

This targeting capability is one of the most potent aspects of Spotify, and it’s something that other social media platforms cannot match. In addition, Spotify allows political campaigns to produce audio content that voters can consume while on the go.

This is important because many consume content while commuting or running errands.

Creating audio content allows political campaigns to reach potential voters were other movements cannot. Spotify also offers detailed tracking and reporting metrics that will enable campaigns to gauge the effectiveness of their ads and audio content.

This data is essential for fine-tuning campaign strategies and ensuring that resources are being used in the most effective way possible.

The benefits of Spotify social listening for political campaigns

How to Use Spotify Social Listening for Political Campaigns

Users spend a lot of time on Spotify.

According to Edison Research, the average Spotify user spends 2 hours and 22 minutes daily on the platform. A lot of time can be spent listening to ads and messaging from political campaigns.

Spotify has a vast user base.

That gives campaigns a vast pool of potential voters to reach with their message.

That number is even higher among millennials, an important demographic for many political campaigns.

Ads on Spotify are effective.

A study by Ipsos found that ad recall on Spotify is 5x higher than that of traditional radio ads. And considering that people often have music playing in the background while they’re doing other things, it’s likely that they’ll hear your ad even if they’re not paying close attention to it.

That’s a lot of potential voters! Additionally, Spotify is highly engaging; users spend an average of 2 hours daily on the site. That means if you can get your candidate’s message in front of voters on Spotify, they will likely see it and hear it multiple times.

Another advantage of using Spotify is that it allows you to target specific demographics. For example, you can target voters in a particular range of age or geographic location.

It is precious because it allows you to customize your message to appeal to specific people.

Spotify is relatively inexpensive compared to other forms of advertising. The cost of running a political ad on the platform is pennies compared to what you would spend on TV or radio ads.

Whether rushing for office or working on a political campaign, using Spotify as part of your social media marketing strategy is brilliant. The platform has a massive user base, is highly engaging, and can target specific demographics. And best of all, it’s relatively inexpensive!

Spotify has always been a go-to platform for music lovers, but in recent years, it has become much more. Thanks to its growing selection of podcasts and other original content, Spotify is now one of the most popular streaming platforms in the world.

And with nearly 320 million active users, it’s also a powerful marketing tool that any savvy political campaign should take advantage of. So, what makes Spotify such an attractive option for political campaigns?

For starters, it offers a captive audience of highly engaged users. According to recent studies, people who use streaming services like Spotify are more likely to be concerned about social and political issues than those who don’t.

This means they’re more likely to be receptive to messages from political candidates.

In addition, Spotify’s targeting capabilities are second-to-none. Its vast trove of data allows campaigns to zero in on specific demographics with laser precision. For example, a campaign could target young adults in swing states who are interested in environmental issues.

Or, a candidate could target African American women who are registered Democrats but have never voted in a primary election. The possibilities are endless.

Spotify offers a unique way to reach voters where they’re already spending their time. Unlike TV or radio ads, which can be easily ignored or fast-forwarded, Spotify ads are integrated into the user experience in a way that is both non-intrusive and effective.

Moreover, because people use Spotify while doing other things like working out or commuting, they’re more likely to be receptive to political messages when they hear them on the platform.

Spotify is quickly becoming a go-to platform for social media marketing, and there’s a good reason. Spotify provides political campaigns with the ability to reach potential voters highly targeted way and produce audio content that can be consumed on the go.

The platform offers detailed tracking and reporting metrics so that campaigns can ensure their resources are being used effectively. Now is the time to start listening if you’re not already using Spotify as part of your political campaign strategy.

As we’ve seen, Spotify can be a powerful tool for political campaigns. It allows candidates to connect with voters intimately, building trust and fostering relationships that could lead to votes on election day.

In addition, by using Spotify, campaigns can reach new audiences that may not be achieved through other forms of media.

If you’re interested in learning how your campaign could use Spotify or need help setting up your account and creating playlists, contact us for a free consultation.

We would be happy to help you get started!