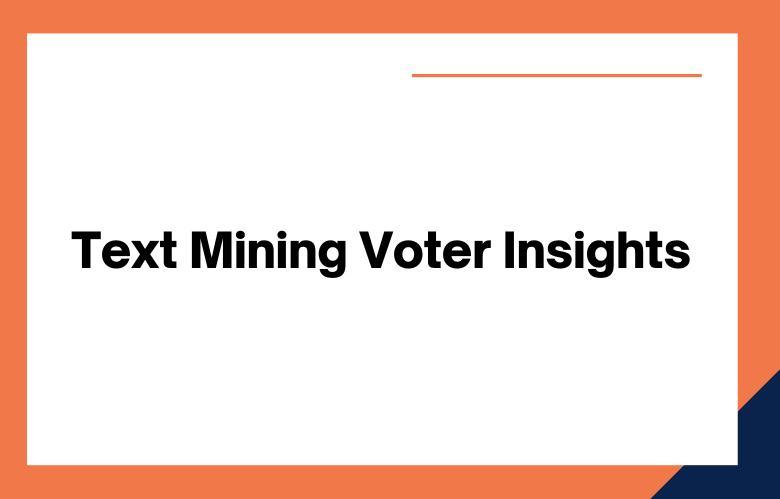 Data mining techniques have been applied to various areas of the political process. One such area is text mining to glean insights from election campaigns. Text mining can analyze social media posts, media coverage, campaign literature, and more. By understanding what voters say, campaign managers can better target their messaging.

Sentiment analysis can be used to track how public opinion changes over time. For example, suppose a candidate’s approval rating dropped after a debate. In that case, text mining could determine if that drop was due to negative media coverage or negative social media posts from voters. By understanding why approval ratings change, campaign managers can adjust their strategies accordingly.

Text mining can also be used to identify key themes and topics that are important to voters. For example, if many voters are discussing healthcare on social media, that indicates that healthcare is an essential issue and should be addressed by the campaign. Identifying key themes early on allows movements to develop messaging that resonates with voters.

How Text Mining can be used to gain Voter Insights

Text mining, also known as text data mining or textual data mining, is the process of extracting information from text. It’s a relatively new field that combines natural language processing, machine learning, and statistics. Text mining can discover what people say about a particular topic, spot trends, and even identify emotions. All this information can benefit election campaigns seeking to understand the electorate better.

There are several ways to mine texts for voter insights. One way is to use sentiment analysis to extract emotions from the text. For example, sentiment analysis could be used to analyze tweets about a candidate to see if more people are expressing positive or negative feelings about them.

Another way to mine texts for voter insights is through topic modeling, which identifies potential topics in a body of text. Topic modeling could be used to analyze debate transcripts to see the most frequently discussed issues.

Text mining is becoming more common in election campaigns as more and more organizations realize its potential. In 2016, the Democratic National Committee hired data scientists to perform text mining on campaign speeches and social media posts to gain insights into how voters felt about the candidates.

The text mining results were then used to adjust the campaign’s messaging accordingly. Furthermore, it’s not just major political organizations using text mining during election campaigns; small movements are also starting to use it.

One of the most critical aspects of text mining is pre-processing the data, so machine learning algorithms can effectively analyze it. This involves tasks such as tokenization, stopword removal, and lemmatization.

Tokenization is splitting a text string into individual tokens (or words). Stopword removal is the method of removing words that are not information, such as “a,” “the,” and “of.” Lemmatization minimizes a comment to its base form so that different inflected forms are counted as the same word. For example, the terms “play,” “plays,” “played,” and “playing” would all be reduced to “play.”

By using it, we can make predictions on new data points. For example, we could use our model to predict how likely people are to vote for a particular candidate based on their social media posts or news articles they have read. We could also use our model to identify which topics are most important to voters.

There are several ways to mine text data for insights. One standard method is to identify and count the occurrence of specific words or phrases. This can be done using simple keyword searches or more sophisticated techniques like latent semantic analysis.

Another approach is to analyze the sentiment of text data, which can be done using methods like opinion mining and topic modeling.

Opinion mining, also called sentiment analysis, is a process of extracting opinions from text data. Topic modeling is a technique for uncovering the hidden structure in text data. This can be used to group documents by topic, identify the main themes in a collection of texts, or find similar copies.

Text mining is a powerful tool that can be used to glean insights from election campaigns. By understanding what voters say, campaign managers can better target their messaging and stay ahead of public opinion shifts. Text mining can help movements develop more effective messaging and win more votes.