The Future of Political Campaign Technologies 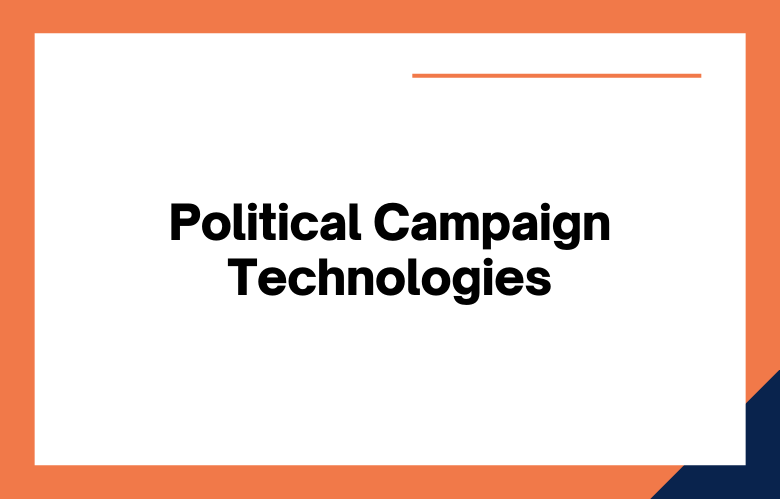 The Future of Political Campaign Technologies

Campaign strategies and technologies will rely heavily on gathering and analyzing large amounts of data. Equipment will be lighter, more mobile, and more powerful to help candidates get their messages across to the voting public.

In the future, political campaigns and elected officials will rely on data and analytics to make faster and better decisions, harnessing tomorrow’s technology in ways never before imagined, driven by technology advancement and transforming the relationship between voters and the elected officials.

Political campaigns are expected to use the latest technologies to organizational advantage. Some of those will be telemarketing, teleprompting, among other applications.

Political candidates will have to use various technological tools to win elections. For instance, candidates will need to create a robust virtual presence on the Internet by aggressively using social media and using data analytics to make sense of the vast amount of information available via various online sources, the study found.

Political campaigns will target voters by pushing an agenda that matches the individual voter. Also, fundraising will be done at a new efficiency level, and the tools used to raise money will achieve massive innovations. Ballot box stuffing will be eliminated, and voter rights will be ensured. Political Campaign Technologies is predicted to dominate the political scene soon.

The world of politics will be driven by technology. In the past, political campaigns have dealt with technology.

Political Candidates will be able to use the power of information to find potential voters and turn them into donors.

Political campaigns will be planned and managed using integrated technology.

Technology will be an integral part of any political campaign, allowing more efficient and effective campaigns.

Political candidates will use the Internet to reach voters and convert them into voters. Innovative websites will allow candidates to educate voters and access all the issues.

Social media tools will be available to discuss candidates on Facebook, Twitter, and all over the Internet. Instead of the media and TV stations, the candidates will become the news media.

Political campaigns will be managed by a combination of both automated and human decision-making processes. Campaigns will be run by a small team of people, with a larger team of volunteers, who will take direction from the campaign website.

Fundraising will become an automated process, and the information needed to make decisions will be provided by large databases and the opinions of everyday people.

Politicians will be “www” candidates. Campaigns will use the same technology, media, and digital tools that the rest of us use in our everyday lives to communicate with and mobilize voters.

The battle for the next election is just heating up, and you won’t want to miss it. Get all of your campaign needs in one place with our tech-savvy tools!

If a candidate can’t get their message across, they may not be successful. Technology is the key to winning any election, and with technological advancements, in recent years, it has become easier than ever!

With the new technology in campaigns, political candidates can reach a much wider audience than ever before.

Outreach and engagement strategies have been entirely redefined by this shift of how we communicate with our fellow citizens on such a fundamental level as public office holders or aspiring leaders amongst us all!

You need to create a message that your audience will listen to. The newest way for politicians is with the help of new technology and social media sites such as Facebook or Twitter!

A political campaign is a necessary evil in our modern society. This article will explore the world of digital and traditional campaigning technologies that can form part of your strategy for success!

Political campaigns will examine different technological advances and blend them. Technologies will be personalized for the candidates and their supporters.

Political campaigns will have a better sense of who will vote for them, when, and why. That’s partly because of the thousands of people working for campaigns and thousands more across the country involved in outreach, recruiting, and field efforts. Social networking, mobile phones, and the internet will be the mechanisms by which people will be “targeted” by campaigns.

More political campaigns will use online organizing and fundraising tools. Digital campaigners will find ways to leverage mobile technology to develop a more personal dialogue with supporters and engage them on issues relevant to their lives.

Digital campaigners will also use data, which allows them to micro-target constituents at the household level with tailored messages.

Technology will become a key element in future political campaigns. Likely, the technology in use today will only continue to become more sophisticated, but the candidates’ experience level with using that technology decreases with time. The people wanting to run for public office will have little or no experience using technology as a campaign tool.

Political campaigns can expect more competition from other strategies and individuals who want to run for office but aren’t associated with a party. They will have to fight for the pivotal votes that may determine the outcome of an election.

Political campaigns will increasingly rely on the Internet and online databases. Drives will take advantage of technologies such as e-mail, e-groups, Web sites, and online political action committees.

The future of political campaign technologies is here, and the power to control how your message reaches voters has never been more accessible. However, with so many options available for campaigning online, it can be challenging to know where to start.

Our team specializes in providing consulting services for both new campaigns looking for guidance or seasoned campaigners who want expert advice on their digital communications strategy. Let us show you how our expertise will help propel your success into the office! Contact us today if you’re ready to take charge of the future of politics by harnessing its most potent tool–technology.