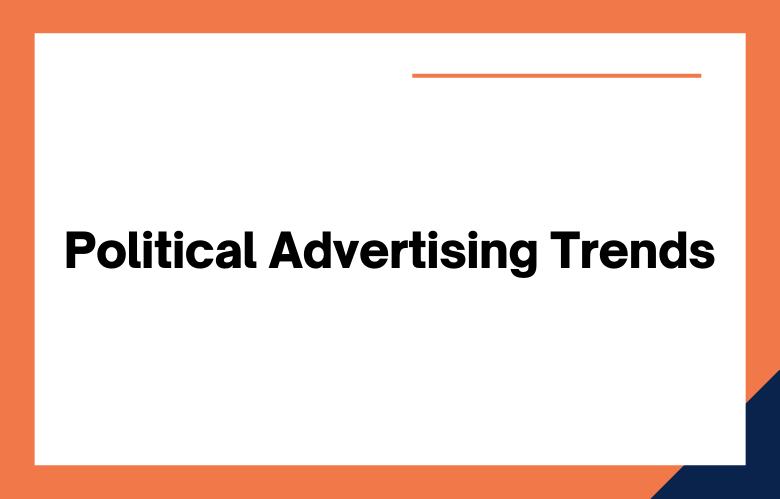 A politician will only buy airtime on television if connected to her voters. To be effective in the future, a politician will have to use TV to make her voters feel like they are talking to her, which requires new forms of interactive technology.

Effective political advertising campaigns will focus on group politics rather than the election of an individual candidate. In other words, politicians will campaign on their ability to represent the interests of their group or demographic, such as seniors.

Political advertisers will move toward more interactive activities. While print media is simply a reflection of daily news, political advertising, like any other form of marketing, can be used as a marketing vehicle for products or services. Still, the critical point for candidates and elected officials is that political advertising can build a bridge between the candidate and the voter.

Political Advertising will be easily manipulated through networks and the Internet. Any interested party, foreign or domestic, can plant information into a campaign and control bits and bytes of data to persuade voters.

The Internet will make it possible for candidates to tailor their message directly to the individual. They can target individual issues to specific voters and speak directly to them in their voice. They will have the ability to put politics back into local hands where it belongs.

Political campaign advertising will employ different and more advanced technologies to target individual voters and take full advantage of the wealth of data collected concerning the behaviors and opinions of voters.

Ads will leverage vital demographic information to better target specific populations and demographics. How the ad is tailored to your neighborhood and other demographics will, with better technology, become more precise and impactful.

Political Advertising will be more accurate, and it will be harder to get away with shoddy advertising claims. It will also be more costly to run campaigns.

Political campaigns will bring the advertising to the consumer through SMS and mobile devices.

Political advertisement segments are already more like participatory reality programs. In the next decade or two, voters may bypass political advertisements altogether by logging on to computerized e-politics and specifying their plan based on their concerns and interests.

Political ads will be interactive, where viewers can decide whether they want to respond to the ad or take action—like phoning in or clicking onto a Web page. They will be more content-driven and sound less like traditional political speeches.

The rapid growth of digital media will provide exciting opportunities to revolutionize the way campaigns are waged. Campaigns discover that they can measure their media spending in real-time and eliminate their advertising budgets. Digital media provides a direct map of the political conversation at any given moment, yielding more accurate feedback that tells the campaign something isn’t working and to stop it now instead of waiting until they discover they are too far behind.

Every Political candidate is a multimedia personality, every campaign is a brand, and every voter is a customer.

Political ads will feature complex, three-dimensional characters who interact via the computer screen. They will appear more lifelike, completely interactive, and highly customizable. Consumers will select their candidate’s race, age, gender, and look.

Broadcasters will sell programs through an auction process that would allow viewers and political groups to follow a campaign, pitch in for the broadcast, and search for the candidate or issue appeals that matter to them most.

Political advertising will be one considerable interactive experience where voters will be polled in real-time and plugged into the election on a more accurate and personal level.

Political advertising will be more than just a 30-second TV ad. It will be a multimedia experience, with full-motion video and graphics. Voters will have the opportunity to actively participate in the campaigns of their preferred candidates via the new technologies, including online games, online debates, online polls, and interactive chat rooms with the candidates.

Political campaigns will be more about influencing a small group of swing voters than trying to convince the most significant possible groups of voters that the candidate is correct or the political party is right.

Political advertising may become a near real-time presence customized to individuals’ interests.

Political advertising will feature only the facts. An announcer, who must be “impartial,” will present the facts and offer only a few candidates and propositions to choose from.

Politicians will customize the content and format of their campaign ads for the individual. This ad will not only be personalized for an individual, who may be a swing-voter or someone likely to vote the opposite of their normal voting behavior or a member of their traditional constituency but also will be personalized for the device they use.

Political campaigns will be more like summer blockbusters and less like the traditional political attack ads. There will be a Utopian vision, a battle between good and evil, and plenty of tension throughout the political campaign drama.

Political advertising will no longer be seen as trying to persuade voters but as a chance to be involved in the campaign like never before.

Political Advertising will integrate audience feedback into the advertising to dialogue between candidates and voters. The “live” aspect of this is the audience’s feedback will be shown to the candidate immediately so that the candidate can then modify future political advertising on the spot.

Political advertising will follow its demographic shift toward the Internet. A different sort of voting-age adults will gather it. It will be the election-cycle media equivalent of the high school student or the twenty-something.

The election is coming up, and the top political advertising trends are becoming more popular. Advertising on television has been a long-standing tradition for decades, but what does this mean for your next campaign?

However, you should consider four main types of ads when planning your strategy. We’ve got a few suggestions from Facebook Ads to YouTube campaigns that may help you get started with your media plan. Contact us today if these tips have piqued your interest or if you need advice about how best to advertise in times like these!