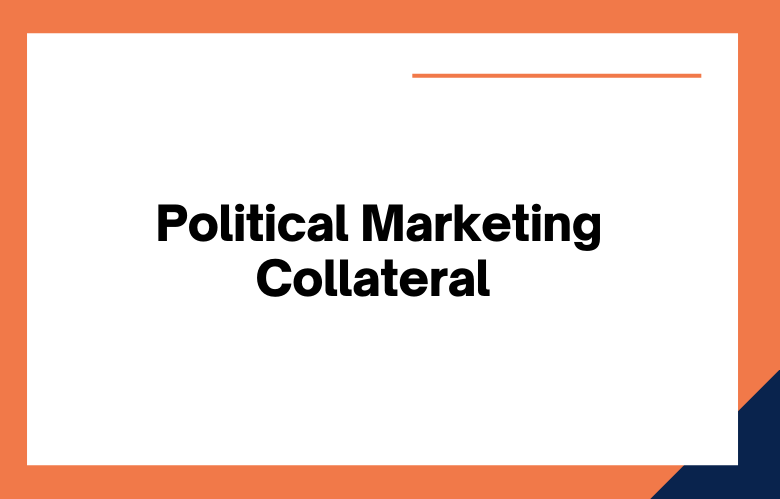 As a political party, you need to have the right tools to communicate your message to voters. Marketing collateral is an essential part of your campaign, and there are several types you’ll need. Here’s a look at the different types and what each one can do for you.

Each type has its unique benefits to help you reach more voters and educate them about your platform.

When it comes to marketing a political party, you will need many types of collateral.

Each type of marketing collateral serves a different purpose, from billboards and yard signs to online ads and social media posts.

Here are four main types of marketing collateral every political party needs to be successful.

The logo for the political party is essential. It is the first thing people will see when looking at the party. The logo needs to be simple yet be able to represent the party well.

The mission of our political party is to ensure a brighter future for all. We believe in the power of the people and their ability to effect change.

Visit the Political Party Website to learn about the party’s platform and candidates.

Find out where the Political Party stands on the issues that matter to you by visiting the Website.

One way that people learn about political parties is by looking at their social media profiles. Each party aims to present itself in a certain way online, and potential voters can get a sense of the party’s platform and values by scrolling through its posts.

Looking at a party’s social media profile is one way to learn about its platform and values. By scrolling through a party’s posts, you can get a sense of what the party stands for and what it cares about.

Please show your support for your chosen political party using their email signature. Never miss an opportunity to campaign by having all the vital information right at your fingertips end. Type in your name, address, and phone number, and include a link to your party’s website.

Political party business cards can be handy for networking and connecting with potential voters. However, they can also be a great way to connect with like-minded individuals and build relationships within the political sphere.

In today’s ever-changing political landscape, it’s essential to have a clear and concise summary of your party’s beliefs. This one-pager will serve as a handy reference for members of Political Party One.

Our party believes in freedom and liberty for all citizens. We want to create a prosperous and fair society with opportunities for everyone to succeed. We believe in the power of democracy and work to ensure that every citizen has a say in how their country is run.

Colors can help people feel more connected to a political party and its representation. For example, the color red might make someone feel more energetic and confident, while blue might make them feel more compassionate and understanding.

By choosing colors that reflect their values and ideologies, political parties can better connect with potential voters and create a stronger brand identity.

The election is coming, and both candidates are racing to win people over. They’re trying hard to come up with the perfect political party slogan.

But what makes a good party slogan?

It has to be short so that people can remember it easily. It should also be catchy and to the point. Most importantly, it should accurately represent the views of the party.

The candidates hunker down with their teams and brainstorm for hours on end, but they can’t seem to come up with anything good.

Eventually, they compromise and come up with something that isn’t perfect, but it’ll have to do.

Digital ads from political parties are becoming more and more common. In fact, according to a recent study, they are now the most effective way to reach potential voters.

This is good news for parties looking to get their message out there. However, it also means that we need to be vigilant about seeing ads. Make sure to do your research before you believe everything you see online!

When it comes to political campaigns, emails have become a meaningful way to reach voters. But Templates, anyone who has ever gotten one can attest, these emails can often feel like they’re coming from a machine, not a person.

More and more campaigns are personalizing their emails, using data to target small groups of voters with messages that feel like they were written just for them. It’s a way to break through the noise and connect with voters that feels genuine and personal.

The Political Party blog is a great way to stay up-to-date on political news.

You can find information on upcoming elections, candidate platforms, and other political news.

The Political Party blog is an excellent resource for anyone interested in staying informed about politics.

If you’re looking for information on Political Parties, look beyond our handy ebooks and guides.

We have everything you need to know about the major political parties, their platforms, and their candidates.

In addition, we offer advice on how to pick the right party for you and how to get involved in the political process.

So check out our collection of Political Party ebooks and guides today!

To win the election, our candidate needs your help! Watch our political party’s online ads to learn more about the issues and where we stand.

A critical aspect of any political campaign is maintaining a solid online presence. A vital part of this is having a well-designed landing page for your party’s website.

Creating a landing page that accurately reflects your party’s values and the message is essential to connecting with potential voters.

Testimonials from political parties can be exciting and engaging. They can explain why people support certain parties and what benefits they see from doing so. Case studies can also be helpful in this regard, providing detailed information about how political parties operate and their positions on various issues.

To engage voters, political parties release their manifestos. The manifesto is a document that summarizes the party’s stance on various issues. Voters need to read the manifesto before casting their vote.

To win an election, a political party must craft a manifesto that adequately reflects its values and convinces the voters that it is the best choice. The document must be clear, concise, and persuasive, outlining the party’s plans for the future. It is essential reading for anyone considering voting for that party.

Political parties are always looking to engage voters and get their message out. One way they do this is through pitch decks. A party’s pitch deck is a way to visually represent its policies and platform that is easy for voters to understand. Parties can communicate their ideas and programs more effectively to the electorate by using a pitch deck.

Political parties vie for attention every election season by creating flyers that get hung up around town. Election season is thrilling for many people as they wholeheartedly support one party or another. For some people, though, the constant bombardment of party propaganda can be a bit much.

Sometimes, the party produces these videos to raise awareness and increase support. Other times, they may be made by an independent organization or individual to educate the public on the issues.

No matter who creates them, these videos can be very helpful in getting a better understanding of the political landscape. Depending on who made them and what approach they took, they can also be quite entertaining.

So if you’re ever feeling lost when it comes to politics or want to learn more about a particular party or issue, check out some political party explainer videos.

The political party songs of today inspire hope and change. They offer a way to express our beliefs, bringing people together. They are the people’s voice, and they have the power to move us forward.

These videos aim to sway voters in one direction and can be very effective.

They often feature footage of the candidate speaking to large crowds, shaking hands with important people, or interacting with everyday citizens.

Political Party original graphics are a great way to show your support for your favorite party. They can also show your dissatisfaction with the current political system. Whatever your reasons for wanting original political party graphics, there are plenty of places to find them online.

Get ready to be informed and entertained with our new series of political party podcasts! In each episode, we’ll interview a member of a different political party, discuss their beliefs and policies, and see where they agree and disagree with each other. Whether you’re a longtime political junkie or just curious about what goes on behind the scenes, these podcasts will give you a new perspective on the world of politics.

The Political Party warns that the economy is in decline. They believe that the government is not doing enough to help businesses. Consequently, they are calling for a policy change.

The report points out that many small businesses have closed their doors. The Party believes that the government needs to do more to help them. They suggest a policy change that would offer tax breaks and other incentives.

The political party reports are in, and the research projects are underway. It’s time to look at the numbers and see what they mean for the future.

The political party community is a close-knit group of individuals passionate about making a difference. They work tirelessly to support their candidates and causes, and they are always looking for new ways to make an impact. These dedicated individuals put their all into every effort, from door-to-door canvassing to dress rehearsals for the next big rally.

Our team can assist if you’re looking for help creating or improving your marketing collateral.

From direct mail and campaign materials to invitations and fundraising letters, we have the experience and expertise to help you make an impact with your constituents.

Contact us today to learn more about how we can help your political party achieve its goals!