Ways to Measure ROI in Your Political Campaigns 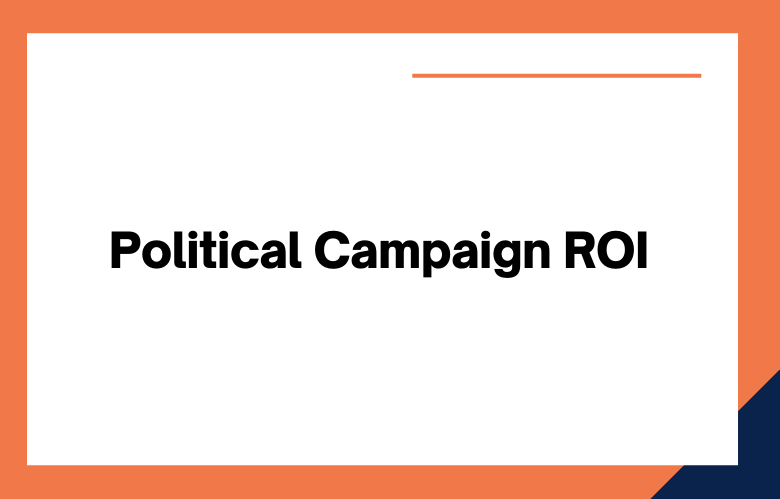 Trying to run a political campaign can be a daunting task. There are several things to consider, and one of the most important is figuring out how to measure your ROI.

It can be difficult to make necessary changes without tracking your progress and seeing what’s working and what’s not.

Whether you’re just starting up your political campaign or looking for ways to optimize it, measuring the return on investment (ROI) is essential. But figuring out how to measure ROI can be tricky – there are many factors to consider.

Measurement of return on investment (ROI) is critical in any business or organization, and political campaigns are no exception. However, determining your campaign’s ROI can be tricky as there are many factors to consider. This blog post will outline some methods for measuring the success of your campaign and determining its ROI.

Ways to Measure ROI in Your Political Campaigns

It’s no secret that successful political campaigns hinge on a candidate’s ability to raise money. What’s lesser-known, however, is how to measure the return on investment (ROI) of those fundraising efforts.

That’s where campaign finance data comes in. By tracking how much money is raised and spent and where it comes from and goes, campaigns can get a detailed look at their ROI.

Of course, money isn’t everything when it comes to campaigning. But understanding where campaign funds are coming from and going is essential for any candidate who wants to run a successful race.

But how do you measure ROI in your political campaign? Here are a few ways to do just that:

— Analyze voter turnout. This is likely the most critical metric for measuring ROI in your political campaign. After all, getting people out to the polls is the whole point. To get a sense of your campaign’s effectiveness in terms of voter turnout, compare the percentage of people who voted in the election with the

Measuring ROI tracks how much money you spend on different campaign tactics and compares that to how many voters you reach.
You can also look at how effective your campaigns are in persuasion by surveying voters before and after your campaign.

One way is to look at how much money was spent on the campaign compared to how many votes were received.

Another way to measure ROI is to look at how effective the campaign was in swaying people’s opinions.

You can also look at how successful the campaign was in achieving its goals, such as increasing voter turnout or awareness of an issue.

No matter how you measure it, ROI is an essential metric for evaluating the success of your political campaign.

There are many ways to measure ROI in your political campaigns. Some standard methods include focus groups, polling, and surveys. However, there are some less traditional ways to gauge ROI as well. Here are a few ideas:

• Pay attention to how media outlets are covering your campaign. Do they seem positive or negative?

• See how engaged people are when they attend your events. Are they passionate about the subject matter?

There are several ways to measure ROI in your political campaigns. Doing so can help you allocate resources more effectively and ensure your campaigns are on track.

Some things you can measure include

Measuring ROI can help ensure that your political campaigns are successful and achieve their goals.

To understand the true ROI of your political campaigns, you need to look at a few key metrics. Here are three important indicators to track:

Using these indicators, you can clearly understand the ROI for your political campaigns. This will help you make more strategic decisions in the future and ensure that your campaigns are as successful as possible.

You can look at the number of volunteers, the amount of money raised, the number of people reached through advertising, and the number of votes received. These factors can give you a different perspective on how your campaign is performing.

Measuring the ROI for your political campaigns is essential to understanding how successful they are.

We’ve outlined the most common methods below. Have you tried any of these techniques? If not, contact us, and we can help you get started.

These methods have their strengths and weaknesses, so selecting the right one for each campaign is essential.

By using the right ROI measurement tool, you can ensure that your campaigns are effective and worth your time and money.