What is Political Share of Voice: What it is and Why it is Important 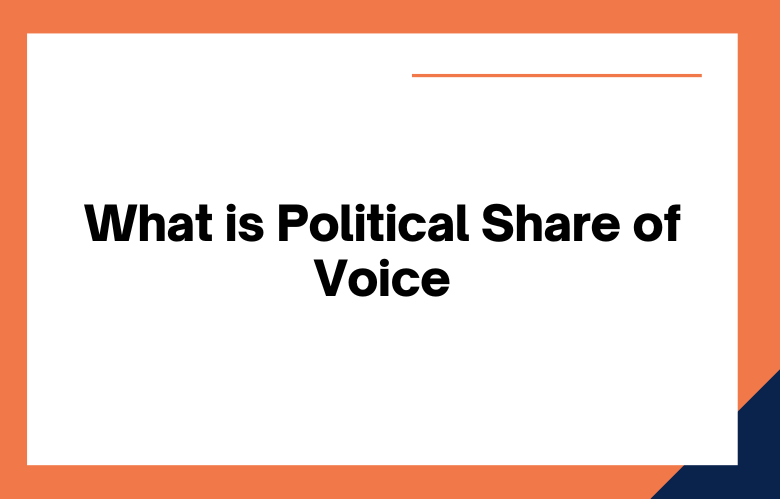 Have you ever wondered how politicians decide which topics to speak about? The answer may be straightforward: they listen to what people say. This process is called political share of voice, and it’s a critical tool that helps politicians connect with voters and understand what issues are important to them.

We’ll discuss the political share of voice in more detail and explain why it is such an essential tool for understanding the electorate.

Political share of voice (PSOV) is the percentage of online conversations about politics that a particular politician or party has. In other means, it measures how often a politician’s name or point of view appears in online political discussions.

The data can then be used to generate insights about which topics are being talked about the most, who is talking about them, and where these conversations are taking place.

One of the primary benefits of tracking PSOV is that it can help campaigns adjust their strategy. If a campaign sees its competitor generating more online buzz, it can quickly adapt its strategy accordingly. PSOV can also be used to track the success of specific campaign tactics.

For example, if a campaign launches a new social media campaign and sees an uptick in PSOV, they’ll know it was successful.

Political share of voice (PSOV) is a relatively new political concept. PSOV is the percentage of online mentions that a particular political party or candidate has about their competitors. It is a valuable measure because it allows campaigns to track and compare their online presence to that of their opponents.

This data can then be used to make strategic decisions about allocating resources.

Politicians and campaigns have always been obsessed with tracking media coverage, but traditional methods like news clip collections are time-consuming and expensive.

PSOV provides a more efficient way to track media coverage by monitoring real-time online mentions. PSOV can be measured using various methods, but the most common way is to track keywords related to a particular politician or campaign.

Several tools are used for this, such as Google Alerts, Mention, and Media Miser. Share of voice (SOV) is a marketing metric measuring the percentage of consumers exposed to a brand’s message.

In other words, it considers the quantity and quality of a brand’s advertising.

For example, Company A spends $10 million on advertising, and Company B spends $20 million. Company B has a 50% higher SOV than Company A. However, if Company A’s ads are twice as effective as Company B’s ads, then Company A has the same SOV as Company B.

Political share of voice (POSV) applies this concept to politics. When we talk about POSV, we’re talking about the percentage of political ads that a particular candidate or party has on TV, radio, social media, etc.

There are two key reasons why PSOV is so important for politicians. First, it provides a way to gauge public opinion on various issues. This information can be used to shape a politician’s public image and to message.

For example, if a politician has a low PSOV score on an issue like climate change, they may emphasize their environmental record in future speeches and interviews.

For example, if older voters are talking about retirement security, politicians may focus their advertising on this issue.

There are several ways to measure SOV. The most common method is by conducting media audits. This involves analyzing all forms of media—including print, broadcast, and online—to see how often each candidate or party is mentioned.

Another popular method for measuring SOV is by conducting surveys. Surveys allow you to ask people who they are supporting and why directly.

This data can then be used to calculate each candidate’s or party’s share of voice. Qualitative methods for measuring SOV also exist but are less common. These methods involve analyzing social media posts, fundraising records, and event attendance figures.

While qualitative methods can provide valuable insights, they are generally considered less reliable than quantitative methods like media audits and surveys.

There are several ways to measure PSOV. The most common method is through Google AdWords.

AdWords allows you to track how often specific keywords are being searched for on Google. You can also use AdWords to set up Google Alerts, which will notify you whenever your chosen keywords are mentioned online.

Another way to measure PSOV is through social media monitoring tools like Hootsuite Insights or Brand watch Analytics. The tools allow you to track mentions of your chosen keywords across all social media platforms.

You can also use tools to track sentiment, that is, whether the overall tone of the conversation around your politician is positive, negative, or neutral.

Over the past few decades, PSOV has become increasingly crucial in American elections. Some believe that PSOV was a deciding factor in the 2016 presidential election.

At that time, Hillary Clinton outspent Donald Trump by a wide margin. She also had much higher name recognition as First Lady and Secretary of State. However, Trump had a very high POSV thanks to his outsized personality and willingness to speak his mind.

This allowed him to cut through all the noise and reach voters directly. As a result, he won the election despite being outspent and out-advertised by his opponent.

In conclusion, the political share of voice is an essential tool that helps politicians connect with voters and understand what issues are important to them. Politicians can gauge public opinion on various issues by monitoring online conversations and effectively targeting their outreach efforts.

PSOV has become essential to any successful political campaign in the age of social media. Political share of voice is a critical piece to understanding how your brand or company stacks up against the competition.

It can help you determine where you should focus your efforts and how you can improve your standing with potential customers.

Our team has experience helping brands achieve their desired results through comprehensive political consulting services. We would be happy to put our expertise to work for you and give you the edge you need in today’s competitive landscape.