Blockchain for Voting: How to use Blockchain Technology in Elections 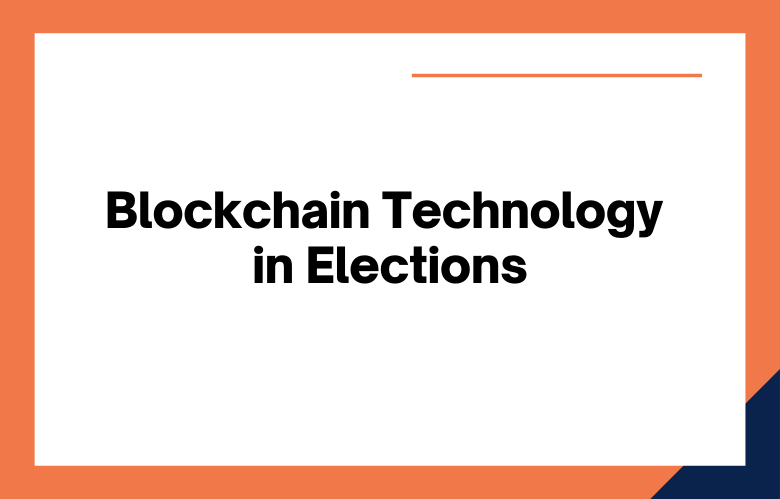 There is a new technology called Blockchain. It’s a decentralized database that records transactions in chronological order and is resistant to tampering by unauthorized parties. Blockchain for voting could be the next big thing in political polling, as it will provide more transparency with less risk of fraud or hacking. How does this work?

Well, let’s look at an example: A voter casts their vote on the Ethereum network using a cryptocurrency wallet with specific data needed to cast their vote. The transaction goes through many computers before settling into the public ledger where other transactions are recorded- all without human intervention required!

Blockchain for voting is a massive topic in the modern world. As we move towards digital democracy, Blockchain can provide an easy and secure way to vote. This blog post will discuss how Blockchain could be used as a system for voting and why it would be beneficial.

Finally, I’ll examine potential security issues with this method of voting and address them one by one, so you can decide if it’s suitable for your country or not!

I hope you enjoy going through my thoughts on Blockchain Voting! Let me know what you think about it, too, in the comments below!

The world is undergoing a paradigm shift in the way that we vote. The Blockchain is one of the most important innovations to have come about in recent years, and it has revolutionized how we think about democracy.

It’s time for us to use this technology so that our voting process becomes more secure, private, and efficient. Let’s explore some ways that Blockchain could be used in elections around the world today.

What Is Blockchain Technology? How Does It Work?

Blockchain is a technology that enables permanent, transparent, and secure online transactions. It’s the revolutionary technology behind Bitcoin.

Blockchain technology is a digital ledger where the transactions made in bitcoin or another cryptocurrency are recorded chronologically and publicly. This open, distributed network allows for anonymous peer-to-peer transfer without an intermediary such as a bank or government.

Blockchain technology is the next step in the way that information is shared. It’s essential to understand how it works, especially because many experts say it will change the internet as we know it.

The technology that powers the Bitcoin digital currency is referred to at times as Blockchain.

Blockchain technology is one of the most revolutionary technologies to be released in recent years. It’s a seemingly simple concept with far-reaching implications, and it can be applied to any number of industries or services.

A new era of voting is coming soon.

Why is Blockchain the Answer for Secure Elections?

As we have seen in past elections, specific individuals can use electronic voting machines to tamper with the results of an election. Blockchain technology offers a quick and efficient solution that will secure votes without slowing down the process.

Blockchain technology is the answer for secure elections because it prevents hackers from breaking in and changing votes.

Blockchain is the answer for secure elections because it helps prevent fraud.

Blockchain is a decentralized and distributed ledger technology that allows for transparent, incorruptible election processes.

Blockchain technology has many potential applications, but its most significant promise is a force for good in politics.

One of the most significant and most common issues in politics is voter fraud. This can be prevented with blockchain technology, but only if it is used correctly.

Blockchain technology can keep track of who votes, and it would be easy to identify if any fraudulent votes were cast.

Blockchain technology makes it much more difficult for people to commit voter fraud. It ensures that votes are counted accurately, and it prevents tampering with voter data.

Blockchain technology can solve many issues, but one way it can help that few people have discussed is fixing voter fraud. Blockchain makes electronic voting more secure by providing a permanent and unmodifiable record of votes cast.

While voter fraud has been a concern since electronic voting machines, blockchain technology can solve this problem.

E-voting is a very controversial topic. Some people think the system we have now works fine, but others believe too many issues to ignore.

Blockchain-based voting systems are the future of democracy. They’re more transparent than traditional ones, and they can be used alongside other methods such as paper or electronic ballots.

When voting in an election, every vote matters. That’s why the blockchain-based e-voting system is so remarkable because it ensures that votes are secure and there can be no tampering with ballots or voter rolls.

We must ensure the integrity and privacy of our voting systems. And blockchain is a fascinating technology; it has numerous applications in elections, including maintaining the voter rolls.

As voters, we want to be sure that our elections are fair and secure. Blockchain technology can help us achieve this goal.

Blockchain is a distributed ledger technology that provides an open, decentralized database for recording transactions.

Blockchain technology could improve the voting process and overall election security by improving how votes are tracked.

Blockchain technology is currently being explored as a solution to secure elections. This would ensure that votes are not tampered with, and the results of an election can’t be altered after it has occurred.

Blockchain is a decentralized ledger that holds all transactions chronologically and publicly. This ensures greater transparency in the voting process, making it easy to identify any fraudulent activity.

Advantages of Blockchain-Based Voting for Elections

Blockchain technology is damaging a lot of industries, but it’s also making voting more secure. This year the government will be using blockchain in their primary elections.

Most people are interested in the capabilities of blockchain technology. One example is blockchain’s ability to provide a solution for secure electronic voting systems that can be used by any organization, from government agencies and corporations to universities and non-profits.

Governments looking to embrace technology as a means of improving efficiency and reducing costs in their voting processes are turning to blockchain.

The Future of Blockchain and Voting: Is This the Next Big Thing?

Everyone is talking about how blockchain could revolutionize the voting process. The government of Estonia has already tried it and was successful.

In the future, blockchain technology will likely influence and change how we vote.

The idea of “blockchain” and “voting” often go hand in hand when you’re reading headlines. There are a ton of different ideas being presented, but will this ever actually happen?

Blockchain is one of the fascinating developments in technology today. It’s [difficult to understand], but it has a lot of potential for revolutionizing voting and secure records.

Blockchain technology is a bit controversial when it comes to voting. Some think that it will take away power from the government, while others see this as a way of increasing government control.

The blockchain can be used in the voting process to create a public ledger of records. It will provide transparency into any discrepancies or fraud.

As we see in the recent presidential election, there are many incidents where people claimed they voted for one candidate, but their votes went to another person. If you want more information on Blockchain Technology in Elections, contact me today!