Digital Billboards for Politics: The New Trend for OOH Advertising 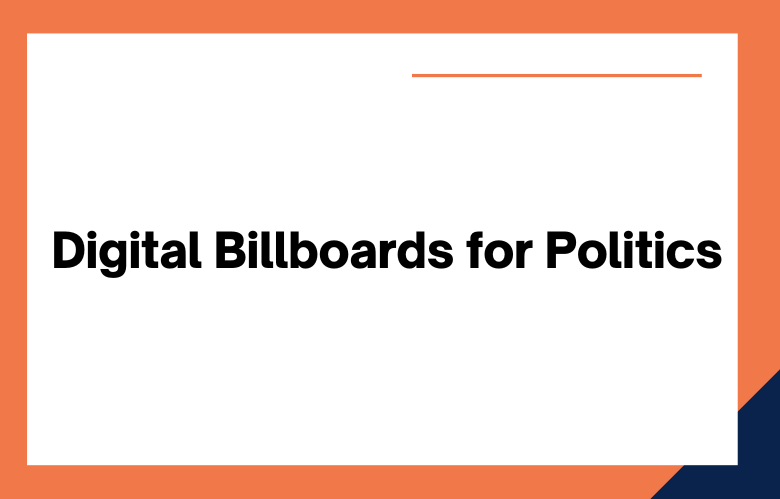 Why are digital billboards such a powerful tool for political campaigns

They’re obvious. Digital billboards are typically located in high-traffic areas, so they’re impossible to miss. And because they’re always on, they have a 24/7 presence that traditional billboards can’t match.

They’re targeted. Unlike TV or radio ads, which are broadcast to a broad audience regardless of whether they’re interested in politics, digital billboards can be targeted to specific demographics. For example, a campaign could target registered voters in a particular district who are likely to vote for their candidate.

They’re flexible. Not only can digital billboards be used to target different demographics, but they can also be quickly adapted to changes in the political landscape. For example, if a new scandal were to break out days before an election, a campaign could quickly adjust its messaging on its digital billboard to reflect the unique situation.

Digital Billboards for Politics: The New Trend for OOH Advertising

With digital billboards, campaigns can quickly and easily change their messaging to respond to current events or take advantage of new opportunities.

For example, when a candidate gets endorsed by a major party or celebrity, they can create a new ad within minutes to capitalize on the news. And if they want to target swing voters in a particular zip code, they can do that too. Traditional OOH advertising can’t match the flexibility of digital.

Thanks to advances in data and technology, political campaigns can now target voters with laser precision. Digital billboards allow campaigns to serve different ads to different demographics within the same market. So if a campaign wants to target women ages 35-49 with one message and men ages 50-64 with another, they can do that quickly and cost-effectively with digital.

Unlike traditional OOH advertising, which is notoriously difficult to measure, digital billboards offer unprecedented transparency and accountability. Campaigns can track precisely how many people see their ads and what kind of impact they’re having in real-time.

They can also adjust their spending based on what’s working and not. As a result, digital billboards are becoming increasingly popular with political campaigns of all sizes.

Outdoor advertising is one of the most significant and cost-effective ways to reach voters. A study by the Outdoor Advertising Association of America found that 75% of Americans notice outdoor ads, resulting in a positive attitude toward the advertiser.

The Power of OOH Advertising

Outdoor advertising is a potent tool. It’s visible, hard to ignore, and can be targeted to specific audiences. For example, if a campaign wants to reach young voters, it can target college campuses and other high-traffic areas where young people are likely to see the ads.

And thanks to technological advances, campaigns can now use digital OOH (DOOH) advertising to target specific demographics with laser precision.

That kind of targeting is essential because it ensures that campaigns get the most bang for their buck. Outdoor advertising is not cheap, so narrowing in on potential voters most likely to support a candidate is crucial.

With DOOH advertising, campaigns can change their messaging based on what’s working and what’s not. That flexibility is critical in the fast-paced world of political campaigning.

In addition, digital billboards can be changed regularly, so campaigns can keep their messages fresh and relevant.

This flexibility is significant in today’s political climate, where campaigns need to be able to adjust their messages on the fly to respond to breaking news or events.

With a digital billboard, you can change your ad on the fly. This means that we can modify our message to fit your campaign’s needs at any time. Additionally, digital billboards are often located in high-traffic areas, which means your message will reach many people.

Digital billboards often have sensors that track how many people view your ad. This data can be used to gauge the effectiveness of your campaign and make necessary adjustments.

Additionally, digital billboards usually have audio capabilities, which allow you to add another dimension to your message and engage with viewers on a more personal level.

Although the initial cost of a digital billboard may be higher than a traditional one, you can have money saved in the long run because you won’t have to pay someone to change your ad manually. Additionally, you won’t have to print new ads every time you want to make a change.

Digital billboards are changing the game for political campaigns by offering unmatched flexibility, targeting, and measurability. Make sure you include digital billboards in your media mix. You’ll be glad you did.

Digital billboards are a new and innovative way to reach voters through outdoor advertising. Thanks to their ability to change messages quickly and easily, target specific demographics, and provide a more engaging experience, digital billboards offer several advantages over traditional static billboards.

If you need an efficient and cost-effective way to reach voters this election season, digital billboards should be your priority.