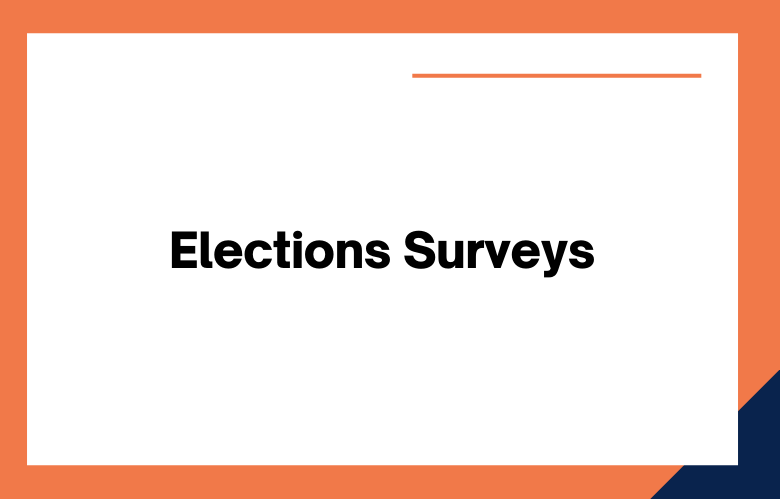 Election surveys are a common way of gauging the public’s opinion on political candidates and issues. There are three main types of election surveys: pre-poll, exit poll, and post-poll. Each type of survey has its strengths and weaknesses.

We will discuss the different types of election surveys and their uses. Stay tuned for future blog posts that will dive into more detail about each type of survey!

What are Elections Surveys?

Surveys are an essential tool in any election. They can help the candidate learn about their needs and desires about the electorate. They also help campaign managers gauge how the winds are blowing and make necessary adjustments.

Elections Surveys are essential tools to provide critical information about voter preferences and election outcomes. However, designing an effective survey is not easy.

Election surveys are a tool that can be used for various purposes. One such purpose is to measure public opinion. Researchers can gain valuable insights into what people think about a particular product or service by conducting surveys.

Elections Surveys are polls conducted by organizations or governments to gauge public opinion on a given issue or candidate. They are often used to help predict the outcome of an election.

A type of survey is taken before an event, such as an election, to predict the outcome.

A pre-poll is a type of political survey conducted before an election. It helps to gather information about voter preferences and opinions.

A pre-poll survey is conducted before an election to gauge the electorate’s opinions.

Pre-poll surveys are conducted before the voting begins in an election. They are used to gauge voter sentiment and predict the election outcome.

A survey of people leaving a polling station after voting was used to estimate how the election had gone.

An exit poll is a political survey conducted after voters have cast their ballots. It helps to gather information about why voters made their choices.

An exit poll is a type of opinion poll conducted as people exit the polling station after they have cast their vote.

Exit polls are conducted after voters have cast their ballots. They are used to determine which candidate or party is winning the election.

After an event, such as an election, a survey was taken to determine how accurate the predictions were.

A post-poll is a type of political survey conducted after an election. It helps gather information about how voters feel about the election outcome.

After an election, a post-poll survey is conducted to assess the electorate’s thoughts and opinions.

Post-poll surveys are conducted after the election results have been announced. They are used to understand why voters chose the winning candidate or party.

Exit polls are conducted as people leave the voting booth and ask who they voted for.

This information is used to determine how accurate the pre-poll survey results were.

Post-poll surveys are sent out to registered voters to understand who voted and why after an election.

We will help you design and implement a survey to provide valuable insights into the voting process.