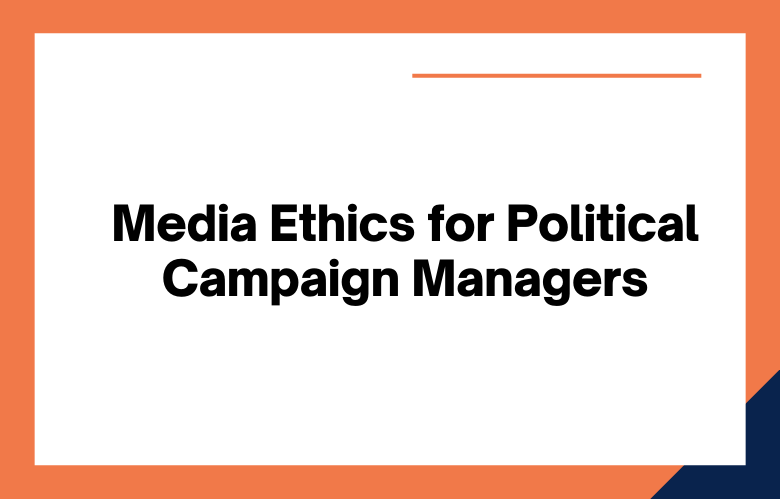 It’s hard to stay objective in today’s political climate. With so many people and organizations trying to influence public opinion, it is nearly impossible for someone who manages a political campaign not to be influenced by outside sources. But what happens when that person is directly or indirectly affected by their candidate? The conflict of interest comes into play, and campaign managers need to know how media ethics can help them navigate these waters.

When media ethics are not considered, the power of the press can be used to sway public opinion. This is a delicate balance as journalists and reporters strive for objectivity but need to consider their sources and present information to avoid manipulating people’s opinions.  In this blog post, we’ll explore what it means when journalists fail to exercise ethical standards and how it impacts campaign managers.

Political Candidate and the Media Ethics

Political candidates should be transparent about their opinions and policies.

In the world of social media, news travels fast, and people have the power to share information with their friends. I believe that candidates should pay attention to what is being said about them in the media as it is the most powerful tool for gaining votes.

Candidates must maintain their social media accounts to promote their campaigns. By posting tweets and updates on Facebook, the public will get a better knowledge of who they are as a person and what they stand for.

Political candidates should not take the media for granted, and journalists must be aware of their role in our political system.

What Does a Political Campaign Manager Do?

A campaign manager works hard to make sure their candidate wins an election by helping plan speeches, advertising, and media appearances.

The job of a political campaign manager can be difficult because there will always be problems that you have to fix.

A political campaign manager is responsible for the management of a candidate’s entire campaign.

The Role of Media Ethics in Political Campaigns

Are the Media Serving the Public

The media is supposed to serve the public, but many times it’s used for manipulating people.

The media is meant to serve the public with stories that are both entertaining and informational.

The public deserves freedom of the press. The media should serve the people, not other interests.

Media as a Watchdog

A watchdog is an independent party that keeps an eye on the government or businesses to make sure they operate well.

Media as a watchdog is critical because it helps keep people in power accountable for their actions.

The media is like an aggressive watchdog that keeps politicians in check.

The media is a watchdog that keeps an eye on politicians and government agencies. They keep us informed of how our tax dollars are being spent, who’s breaking the law, and what people in power are doing to make changes for the better.

A Career in Political Communication

In a political communication career, you try to convince voters of your candidate’s platform.

Maybe a career in political communications would be interesting to you. You could get an education and then work for a campaign or politician’s office, helping the candidate say what they need to say so that they can win.

A career in political communication will be rewarding. This career allows you to convey your views on policies and events to people through different ways of communication.

One of the best jobs I know is as a political communicator. You get to combine your passions for writing, speaking, and activism with government work, which can be very rewarding both personally and financially!

Suppose you are a political campaign manager and need help with media ethics; we can provide consultation and assistance. Contact us today to find your ethical strategy for the next election cycle!

Politicians are not the only ones who need to be concerned about ethics. Campaign managers also have a responsibility to consider media ethics when building their strategy for political campaigns. They must make sure that they abide by all laws, avoid conflicts of interest and consider how what is said in public can affect both themselves personally as well as the candidate’s campaign.