How to Utilize Social Listening for Political Campaigns 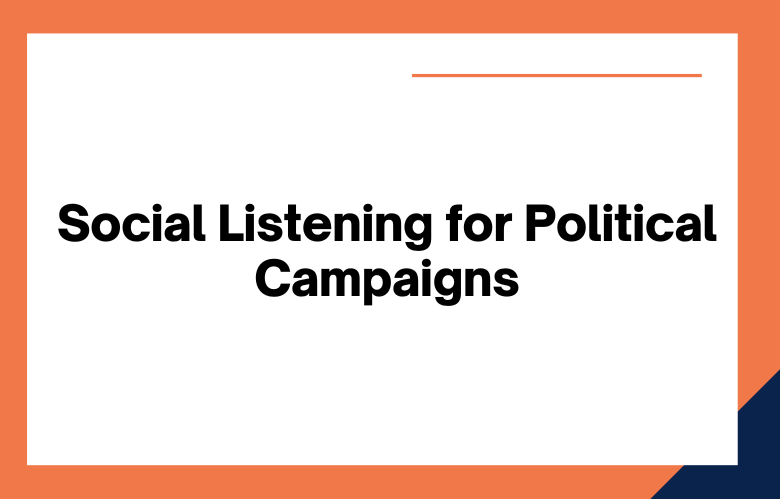 Social media has become an invaluable asset in political campaigning. Each election season, candidates and their teams use social listening techniques to analyze how their campaigns are doing online.

From tracking the number of interactions with a post to understanding why people choose specific candidates, social listening can provide valuable insights into what works and doesn’t.

Let’s explore how political campaigns can leverage the power of social listening to improve their chances of winning an election.

Social listening is an invaluable tool for any political campaign. With social media becoming increasingly important in politics, understanding online conversations and how to respond to them can make or break a campaign.

We’ll discuss how you can use social listening to inform your political campaign and help you reach the widest audience possible.

What is Social Listening?

Social listening is monitoring conversations on social media platforms such as Twitter and Facebook. It involves using special tools to monitor keywords, hashtags, topics, and questions about your campaign or candidate. Using these tools, movements can gain insight into what people are saying about them on social media—both good and bad—and use that data to make informed decisions about future strategies.

For example, you notice that a particular hashtag is gaining traction among your followers or potential voters. In that case, you can use that information to craft content or messages around that hashtag to further engage with those audiences.

Additionally, if there’s a negative sentiment surrounding your campaign online—such as criticism from opponents—you can use social listening tools to identify those conversations and respond quickly with accurate information and rebuttals.

Why is Social Listening important for Political Campaigns?

Social listening helps political campaigns stay on top of current trends in public opinion so they can adjust their strategies accordingly. It also helps them identify potential supporters who may not have been aware of them and might persuade by well-crafted messages tailored specifically to them. Finally, it allows campaigns to stay ahead of the competition by understanding their tactics on social media so they can either mimic or counter them effectively.

Social listening involves monitoring conversations on social media platforms and analyzing the sentiment of those conversations.

Social listening also allows you to understand what topics resonate with voters, so you can craft content that speaks directly to those issues. It is essential in the digital age, where campaigns must be agile and responsive to stay relevant. By utilizing data from social listening, you can ensure that your message reaches the right people at the appropriate time.

Another benefit of social listening for political campaigns is that it enables candidates to connect with their constituents on a more personal level. By responding directly to comments from followers, candidates can express their points of view while also demonstrating empathy for their constituents’ concerns. This personalized interaction helps build trust between candidates and their supporters, translating into votes on Election Day!

The Power of Social Listening for Political Campaigns

Social listening is about tracking conversations on social media platforms like Twitter and Facebook. Political campaigns use this data to gain insight into how people feel about a particular issue or candidate and identify potential supporters interested in donating or volunteering for the campaign.

It allows campaigns to get an accurate public opinion on healthcare reform or gun control, which can then use to craft messages that resonate with voters across the country.

Social listening also allows campaigns to interact directly with potential supporters on social media. Listening tools allow movements to respond quickly and effectively to questions or comments from potential supporters, creating a personal connection between the voter and the candidate or party.

It helps generate loyalty among supporters and encourages them to spread positive messages about the candidate or issue online, which can help organically grow support for a campaign.

Finally, social listening can help campaigns identify influencers who have large followings on social media and might be willing to lend their support to a particular cause or candidate.

For example, suppose political campaign notices that someone has been talking positively about one of its candidates on Twitter. In that case, they may reach out to that person and offer them an opportunity to become an official spokesperson for the campaign—a move that could pay dividends in terms of increased visibility and support down the line.

How does Social Listening Work?

Social listening involves tracking conversations happening in real time across all social media platforms. Politicians can use this information to make informed decisions based on the conversations they are seeing. For instance, if a trending topic is related to their campaign or platform, they can quickly create content that speaks directly to that topic and respond to any questions their followers may have.

It helps keep their voters up-to-date on where they stand on different issues and allows them to show their followers just how engaged they are in the conversation around those topics.

The benefits of Social Listening for Political campaigns

Social listening provides campaigns with valuable insights into what people think about them. They can see which topics generate the most engagement among their followers, which type of content resonates with voters, and which messages are shared the most often. This information can create better content strategies for future campaigns and more effectively target specific audiences. Additionally, by paying attention to what people are saying about you on social media sites, you can address any concerns before they become an issue during the election season.

Social Listening for Political Campaign Consulting is a practice that involves gathering data and insights from social media platforms to gain valuable information about potential voters.

By carefully analyzing conversations that people are having online, a consultant can gain an internal look into the hearts and minds of the electorate.

In addition to gaining insight into how individual opinions may affect the outcome of a political campaign, Social Listening can also provide an overall sentiment score for a particular topic or candidate.

Moreover, Social Listening should use in conjunction with other traditional research methods to craft effective campaigns. It includes polling, focus groups, and interviews with experts in the field.

Combining these various sources of information provides a comprehensive view of the current public opinion climate surrounding a campaign.

It allows consultants to make strategic decisions based on data-driven facts rather than hunches or guesswork alone.

When used correctly, Social Listening can be an invaluable tool for political campaign consultants looking to succeed in today’s digital landscape.

By leveraging this powerful method, it is possible to create targeted strategies with messaging that resonates deeply with potential voters around critical issues and values.

Social listening is an invaluable tool for political campaign consulting.

By utilizing the right tools and techniques, campaigns can monitor conversations about their candidate and gain insight into their target audience’s attitudes, beliefs, and behaviors to make more informed decisions.

Through social listening, campaigns can detect emerging trends in the public discourse and hone in on what issues matter to voters.

By gathering data from various sources, including polls, social media conversations, surveys, press releases, and more, consultants have a 360-degree view of their candidate’s base.

With this data, they can develop tailored strategies that address the electorate’s needs while staying in line with their candidates’ platforms.

Furthermore, by keeping tabs on current events related to the campaign topics or opponents’ movements, campaigns are better equipped to respond quickly and effectively when necessary.

Awareness of any negative sentiment aimed at a candidate or their policies allows them to address it swiftly before it spirals out of control.

All these benefits ultimately lead to sharper messaging and more intelligent decision-making, which can drastically improve a campaign’s chance at success come Election Day.

As such, we are utilizing social listening for political campaign consulting is an absolute must for anyone looking to win the race for office.

Social listening is an invaluable tool for any political campaign looking to engage with its supporters and make sure its message resonates with voters.

By monitoring conversations across different social media platforms and analyzing their sentiment, campaigns can ensure they’re speaking directly to their target audience in meaningful and effective ways.

With effective social listening strategies, candidates can get their messages heard and build trust with their constituents by responding directly and showing empathy toward their concerns.

As a political campaign consultant, it is essential to understand how social listening can help you win elections.