How to find YouTube Influencers for Your Political Campaign 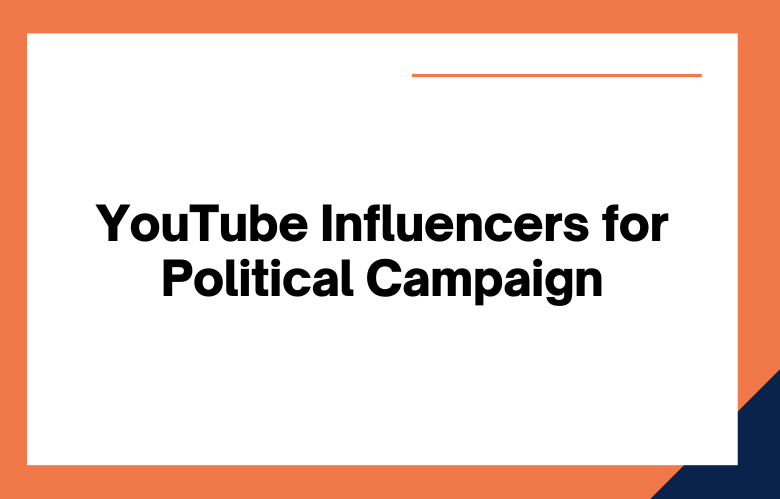 In the world of politics, there are a lot of ways to get your message out there. You can run ads, knock on doors, and hold rallies—but if you want to reach people where they’re, you need to use YouTube influencers. Here’s why.

YouTube is the second-largest website in the world, with over 5 billion users logging in every month. That’s a lot of potential voters! And what do people love to do on YouTube? Watch videos. That’s where influencers come in.

How to find YouTube Influencers for Your Political Campaign

An influencer is someone with a large following on social media who can help promote your campaign to their audience. And when it comes to YouTube influencers, there are two types you can work with: macro-influencers and micro-influencers.

Macro-influencers are those with millions of followers, while micro-influencers have a more modest following of around 100,000. Both have their advantages and disadvantages.

No matter what influencer you work with, pick someone who aligns with your political party and whose values mesh with yours.

Once you’ve found the right person, it’s time to start reaching out! Collaborating with an influencer doesn’t have to be complicated or expensive—a simple request for them to mention your campaign in a video or shout out your Twitter handle can go a long way.

And if you’re feeling generous, you could even offer to pay them for their time (although most influencers will be happy to mention your campaign for free).

Here are a few reasons why working with YouTube influencers is an excellent idea for your political campaign. First, influencers already have an established audience that you can tap into. By partnering with an influencer, you can reach potential voters you might not otherwise be able to get.

People trust influencers. People who see an influencer endorse your candidate or campaign are more likely to take that endorsement seriously. After all, if someone they follow and respect is backing your candidate, then your candidate must be worth considering!

YouTube influencers are creative and can help you produce engaging content for your political campaign. If you’re struggling to develop ideas for your YouTube channel, partnering with an influencer can give you the boost you need to get started.

And once you start producing great content, you’ll find it more accessible and easier to keep coming up with new ideas.

How to search the right YouTube Influencer for Your Campaign

Now that you know why working with a YouTube influencer is a good idea, it’s time to start looking for the right partner for your political campaign. There are a few things to remember as you search for an influencer who is a good fit for your candidate or cause.

Ensure that the influencer’s values align with the importance of your political campaign. It would be counterproductive to partner with an influencer whose values clash with your candidate or party!

Consider the size of the influencer’s audience. You’ll want to partner with someone who has a sizable following but is not so significant that they’re out of your price range. Take a look at the content the influencer typically produces. Is it high quality?

Does it align well with the content you want to produce for your campaign? By keeping these factors in mind, you’ll be able to find an influencer who is the perfect partner for your political campaign’s social media presence on YouTube!

There are a few ways to find YouTube influencers for your political campaign. The first is to use a tool like Social Blade or Klear. These tools allow you to search for YouTubers by keyword, category, or location.

Once you’ve found a list of potential influencers, please review their video content and ensure that it aligns with your political views. Also, please pay attention to their videos’ engagement; you want to work with an influencer with an engaged audience likely to support your campaign.

Another way to find YouTube influencers is to reach out to them directly. You can do this by emailing them or leaving a comment on one of their videos. Introduce yourself and explain why you think they would be a good fit for your political campaign.

They’ll likely get back to you with more information if you are interested. You can also use Google AdWords to find potential YouTube influencers. Just create a list of keywords related to your campaign and run an ad campaign targeting those keywords.

Then, please look at the results to see which YouTubers deliver your ad to their audience. These are the influencers that you want to reach out to!

For example, if you’re running a campaign on climate change, you might search for “climate change” or “environmentalism.” Once you have a list of potential candidates, it’s time to start researching.

Check out their channel. If you’ve identified some potential influencers, it’s time to check out their gutters. Please pay attention to the number of subscribers, the quality of their videos, and the engagement they get from their viewers.

Send them an email or direct message and introduce yourself and your campaign.

Explain what you’re looking for and why you think they would be a good fit. If they’re interested in working together, great! If not, no worries–move on to someone else on your list.

YouTube influencers can be powerful allies for your political campaign. They can reach many people with videos and help you spread your message far and wide.

Look no further than YouTube influencers if you’re looking for ways to reach more voters and get your campaign off the ground.

Contact us today for Political Campaign Consulting so that we can help you find the right YouTubers to partner with and launch a successful campaign.