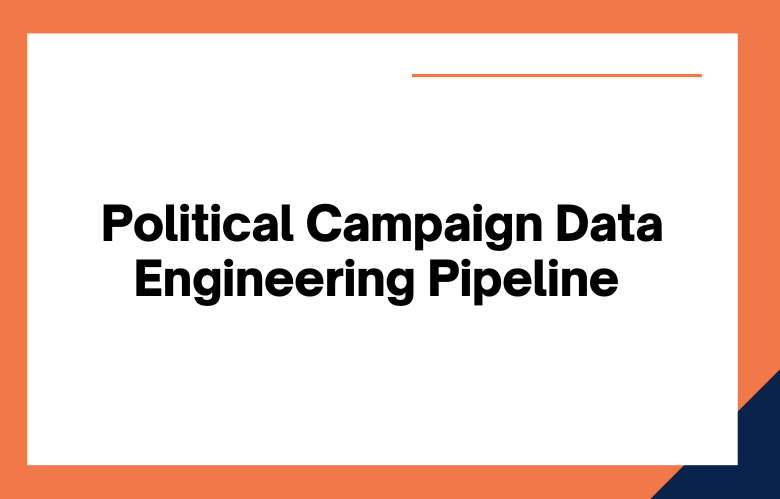 Political campaigns have a massive amount of data they need to analyze to make informed decisions. Here is everything about Political Campaign Data Engineering Pipeline.

With the help of Python and Apache Airflow technologies, political campaigns can build data engineering pipelines that automate their data processing needs, save time, and give them an edge over competitors. Let’s explore how this works.

Political campaigns rely heavily on data to make sound decisions, but managing large amounts of data can be difficult. It is where a data engineering pipeline using Python and Airflow comes in.

A robust data engineering pipeline allows you to collect quickly, process, and analyze your political campaign data to effectively target voters, optimize your marketing strategy, and more. Let’s have a look at how this works.

Python is a general-purpose, high-level programming language used by many developers in the web development, software engineering, machine learning, and scientific computing communities.

It allows users to write clean code quickly and efficiently while still providing enough flexibility to customize their projects using libraries such as NumPy and pandas.

Python’s easy-to-learn syntax makes it ideal for political campaigns looking to automate their data engineering pipeline without learning a new language from scratch.

What is Apache Airflow?

It provides users with an intuitive graphical user interface (GUI) that makes it easy to monitor all of their running tasks at once and view detailed information about individual assignments when needed.

Airflow also has a wide array of operators, which allows developers to create custom workflows explicitly tailored to their needs quickly.

How do we use Python and Airflow together?

Due to their respective strengths, Python and Apache Airflow are ideal for automating political campaign data engineering pipelines.

Meanwhile, Apache Airflow will schedule the tasks related to collecting this data so that they run on time without any hiccups or delays.

This combination ensures that campaigns can access accurate, up-to-date information when they need it most—right before election day!

What is a Data Engineering Pipeline?

A data engineering pipeline is a set of processes that allow for the efficient collection, processing, and analysis of large amounts of data.

A data engineering pipeline aims to provide valuable insights into your political campaign’s performance so that you can make better decisions.

A promising data engineering pipeline should use Python as its programming language and Airflow as its workflow manager.

Why use Python & Airflow?

Python is one of the most popular programming languages in the world, making it perfect for collecting, processing, and analyzing all kinds of political campaign data.

It has a wide range of libraries and frameworks that make working with different kinds of datasets easier than ever before.

Airflow is an open-source workflow management system that makes it easy to automate tasks such as scheduling when tasks should run and monitoring their progress.

How do Python and Airflow Work?

Once you have chosen Python and Airflow as your go-to tools for building a robust data engineering pipeline for your political campaign’s needs, it’s time to start building!

You will need to set up an environment where all components can interact seamlessly (e.g., databases like MySQL or Postgres).

Then you can begin collecting datasets from various sources (e.g., voter registration records) and start cleaning them up by removing any unnecessary or irrelevant information (e.g., duplicates).

After this step is complete, you can use Python libraries like Pandas or NumPy to process the cleaned-up dataset, so it’s ready for analysis (e.g., creating charts or tables).

Data pipelines are an essential part of political campaigns because they manage all the data from various sources (both internal and external) into one platform where it can be analyzed and used for decision-making.

By automating the process, campaigns can save time and money while ensuring they have real-time access to accurate information.

Python is a great language to use when creating political campaign data engineering pipelines because it is versatile and easy to learn.

It also has powerful libraries like pandas and sci-kit-learn, which can help with complex statistical tasks such as sentiment analysis or predictive modeling.

Python is well supported by third-party packages such as Apache Airflow, which can use to create scalable and reliable data pipelines.

Apache Airflow is an open-source workflow management system in Python that allows users to design, schedule, execute, monitor, and control their data processing projects from a single interface.

Airflow provides powerful tools for monitoring job progress so that teams can keep track of their progress without manually checking each task.

Python is the most popular language for building data engineering pipelines due to its flexibility, scalability, and robust set of libraries for working with data.

For example, Pandas is one of the most popular Python libraries for manipulating tabular datasets in a way that makes them easier to query and analyze.

Python also has powerful visualization libraries such as Matplotlib, which can create beautiful charts from your collected campaign data.

It allows users to define tasks, schedule them to run at specific times or intervals, and monitor their progress in one easy-to-use platform.

Airflow also provides features such as logging and error handling, making it much easier to debug any pipeline issues quickly and efficiently.

Building Your Pipeline with Python & Airflow

The first step in building a political campaign data engineering pipeline with Python & Airflow is defining the tasks that make up your pipeline.

These tasks can range from collecting campaign donations from various sources (e.g., online donation sites) to transforming raw donor data into insights about who your voters are likely to be.

Once these tasks have been defined, they can then schedule using Airflow’s scheduling interface so that they run automatically regularly without any manual intervention required by you or your team.

Once your pipeline has been built using Python & Apache Airflow, you can use it to ensure that all of your campaign’s essential metrics are being tracked accurately and reliably over time so that you can make decisions based on real-time insights about where best to allocate resources within the organization.

Using technologies like Python and Apache Airflow, political campaigns can build automated data engineering pipelines that will save them time and money while allowing them access to reliable real-time information.

In short, these technologies offer political campaigns an edge over their competitors by ensuring they always have access to up-to-date, accurate information when needed.

It makes them invaluable tools for any successful campaign!