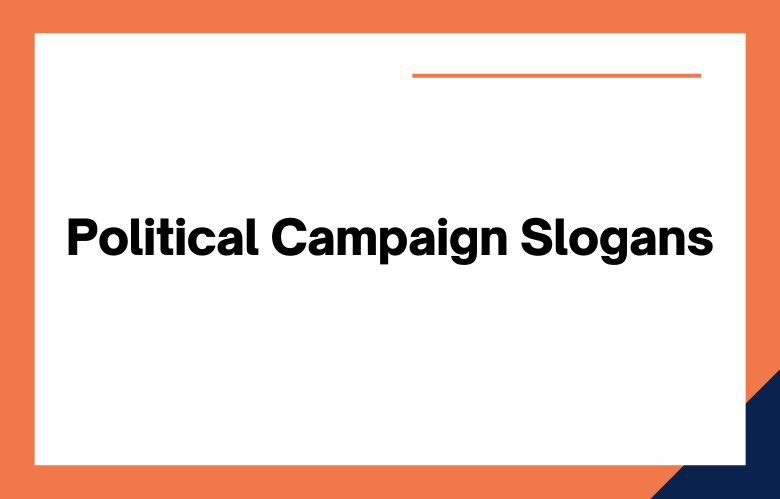 Political Campaign Slogans: The rise of political ad campaign slogans and their impact on society can be seen. It can be categorized differently, so you can easily find what interests you the most. There will also be links to other posts about this topic, which may provide additional information or insight.

Social research found that politicians are becoming lazier in their campaigning. They are not willing to do the hard work of coming up with a slogan or platform they can sell to voters, so instead, they steal something from other candidates and hope it sticks. It’s not enough for them to put out a press release saying “I’m running” they need a tagline that will make people remember who they are. The problem is, most slogans sound as if someone else wrote them – which is usually the case!

What are Political Campaign Slogans?

A campaign slogan is a short, memorable phrase used in politics and advertising.

In politics, where people get elected to office, slogans are used as a short idea. Slogans can be for or against any particular political issue.

They are a clever way to advertise and promote your political ideas.

Most of the time, when people are faced with a tough decision, they tend to lean toward the most popular opinion. In politics, parties will focus on creating catchphrases about their party or policies to sway voters.

A slogan is a memorable term that captures the essence of a political candidate or cause. Slogans can be used to create public awareness or make people take action.

How To Create Political Slogans

Have you ever heard anyone say, “I can’t wait to vote!”? Well, it’s time we start saying that. A government by the people and for the people is a great way to live in any country.

To create effective political slogans, ensure they include the essential points you want to convey. Please do your best to express a single idea in each slogan, so people don’t get confused by their length or complexity.

One of the best ways to create political slogans is by being very specific about your policy. For example, if you’re running for office as a democrat, you must explain how your policies help the middle class.

Why does your campaign needs Most Memorable Campaign Slogans

Creating a slogan is one of the essential parts of running an election campaign. A personal touch can make all the difference when trying to connect with voters.

Well, you can have a catchy slogan that will stick with people and help make your campaign memorable.

It’s important to note that not all campaign slogans have the same impact on potential voters. An example of a saying that
will influence people would be: “Vote for me, and we’ll build a border wall.”

A slogan can influence voting behavior by activating voters’ attitudes toward a candidate.

A recent study shows that campaign slogans have a direct effect on voting. When voters hear the saying more than once, they are more likely to vote for the candidate associated with it.

The power of a political slogan can be immense. Slogans have been used to create memorable phrases that are still used today. Whether you’re running for office or want to make your message more effective and engaging, it’s essential to know how people react when hearing these five campaign slogans. Contact us if you need help creating catchy political campaign slogans.

A good slogan is key to a successful political campaign. It can be used as an effective branding technique or to establish the party’s values and goals for voters.

Slogans should convey concisely what you are trying to communicate with your base voter group while simultaneously appealing to undecided voters who may not have strong feelings either way about your candidate but would like some clarity before they cast their vote. Contact us today if you need help creating a memorable and impactful slogan for your next election cycle!