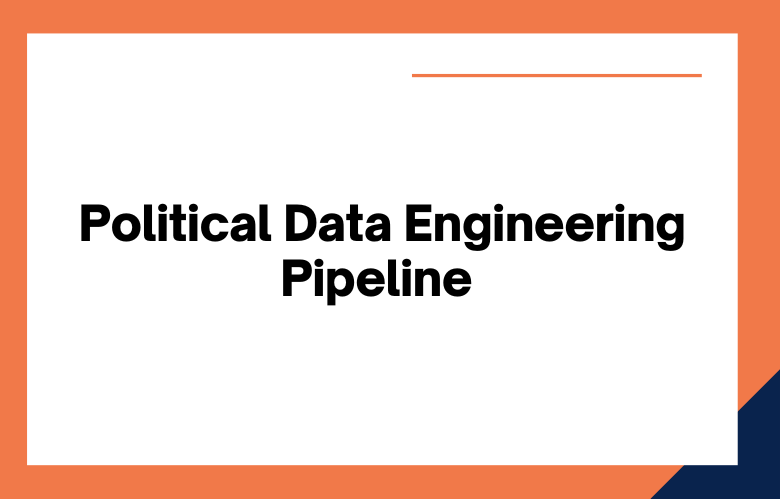 Political data engineering is no longer a nice-to-have; it’s a must-have. With politics becoming increasingly digital, politicians need to be able to quickly and easily access data from multiple sources to make informed decisions. Fortunately, there are tools available that can help.

Using Python and Airflow, you can create an efficient pipeline allowing you to access data from multiple sources, cleanse it, and generate the insights you need. Let’s explore how this works in more detail.

As a politician, staying up to date on the latest data engineering technologies is essential. One of the most popular tools for politicians is the Python and Airflow pipeline.

Python and Airflow are powerful tools that allow you to streamline your political data engineering process easily.

We will explore how you can use Python and Airflow to build sophisticated political data engineering pipelines and the various benefits of doing so.

Leveraging the Power of Python and Airflow for Political Data Engineering

What is the Python and Airflow Pipeline?

It allows you to connect disparate datasets, build efficient ETL jobs, write custom code to process complex datasets, and utilize machine learning libraries like TensorFlow and Keras to gain insights from your data.

It also includes a comprehensive user interface with intuitive visualizations that make it easy to interpret your results.

With the help of the tool, you will quickly develop reliable and scalable political data pipelines without having to learn any complicated coding languages or frameworks.

Benefits of using the Pipeline

Using the Python and Airflow pipeline can provide numerous advantages for politicians regarding their political data engineering processes.

Not only does it make it easy for them to develop complex pipelines with minimal effort, but it also helps them become more informed about their constituents’ needs by allowing them access to real-time insights about their district or state.

Since the pipelines are built on top of open-source software, they are highly customizable, making it easy for politicians to adapt their channels over time.

This tool is highly secure since all data is encrypted in transit and at rest, ensuring that all sensitive information remains safe from malicious actors or cyberattacks.

The benefits of Python for Political Data Engineering

Python has become the go-to language for many political data engineers due to its readability and flexibility.

Python is easy to learn and understand, making it perfect for creating complex pipelines with minimal effort.

It also has powerful libraries such as pandas which makes manipulating and analyzing large datasets much more accessible than if you were using traditional programming languages such as C or Java.

Python’s scalability allows you to easily add new features or update existing ones without having to rewrite your entire codebase from scratch every time.

It enables you to define tasks that can run on a recurring schedule (e.g., hourly, daily) or be triggered manually by an event (e.g., the arrival of new data).

You can also use Airflow’s built-in UI tools to monitor your pipeline performance in real time, so you can quickly identify potential issues before they become significant problems.

Airflow integrates seamlessly with popular cloud platforms like AWS, so you don’t have to worry about managing infrastructure.

As with any project involving sensitive information, certain best practices should follow when creating a political data engineering pipeline using Python and Airflow.

These include encrypting all stored data at rest and in transit; ensuring all tasks are idempotent; leveraging logging frameworks such as logstash and fluent; monitoring the Pipeline end-to-end; implementing strict permission controls; and regularly testing your code against production data sets before deployment.

Following these best practices will help ensure your political data engineering project runs smoothly and securely for years to come!

Python is a powerful programming language that makes it easy to collect, clean, manipulate, and analyze large amounts of data. Its built-in libraries are ideal for collecting data from multiple sources—including public opinion polls and social media platforms like Twitter, Instagram, Facebook, and others—and preparing it for further analysis.

It allows you to quickly identify trends in the data that you may not have noticed by looking at raw numbers or a single source of information. This step is essential for understanding the electorate’s current views on an issue or candidate before designing an effective strategy for targeting them.

Once all the necessary data has been collected, it’s time to start analyzing it with Airflow.

Airflow is a popular open-source platform many businesses use for automating workflow processes.

It can use to automate tasks such as cleaning up datasets, running machine learning algorithms on the data to uncover meaningful insights, visualizing results in real-time dashboards or reports, scheduling jobs throughout the day or week depending on what needs processing first, and more.

It makes it easier to quickly get a handle on what kind of strategies need to implement to reach voters more efficiently.

The last step in the political data engineering pipeline is visualizing the results to create an actionable plan of attack.

With Python and Airflow combined in one platform, you can quickly turn complex datasets into beautiful charts or graphs that make it easy for anyone—even those without coding languages—to understand what’s happening within your dataset at any given time.

You can customize these visuals with annotations, so each team member knows what strategies to implement next based on their findings from the analysis phase beforehand.

Python is an incredibly versatile programming language prevalent in data engineering. It is easy to learn, has excellent libraries for data analysis, and allows you to quickly run complex calculations on your datasets. Python also makes it easy to visualize your results with charts or graphs, enabling you to make more efficient decisions based on your findings.

Airflow is a workflow management framework written in Python that allows you to automate complex workflows easily.

It provides an easy-to-use web UI to view your pipelines’ status and quickly identify improvement areas.

Airflow also allows you to create tasks that run on defined schedules so that your Pipeline runs automatically without manual intervention. It makes it easier for politicians who are already busy juggling numerous responsibilities throughout their day-to-day lives.

Once you have both Python and Airflow, creating your political data engineering pipeline will be simple. First, decide which datasets need processing, such as voter registration information or election results from past years.

Then define each dataset’s schema using Python code so the data can easily organize into tables or other data structures for analysis.

Finally, use Airflow’s built-in scheduler feature to automate the entire Pipeline—from ingestion through analysis—so that all of this happens without any manual intervention from you or your team members!

In summary, by leveraging the power of Python and Airflow, politicians can build an efficient pipeline that allows them to access rapidly changing data from multiple sources while keeping their overall infrastructure costs low.

By following best practices such as encryption, permission control, logging framework usage, testing against production datasets, etc., they can ensure their pipelines are secure while still being able to scale as needed over time.

For politicians looking to stay ahead of the competition in today’s ever-changing world of politics, investing in a well-thought-out political data engineering pipeline is undoubtedly worth considering!