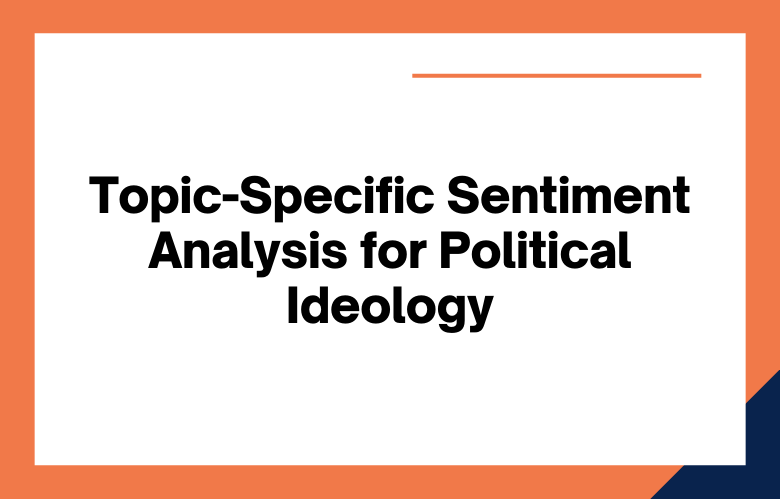 We’ve all seen the outrage on Twitter and Facebook over current political issues, but how can we make sense of it? What does this anger mean for our democracy?

Yes! With advances in artificial intelligence (AI), sentiment analysis is now possible. By using AI and topic-specific sentiment analysis, we can identify people based on their political ideology. Let’s explore how this works.

Political ideology can be difficult to identify based on social media posts. The data is usually biased, and the opinions of people are not always explicit. Topic-specific sentiment analysis can help us learn more about what people think about specific issues, like abortion or gun control. It breaks down their beliefs into two categories: pro-life or pro-choice, for example.

What is Political Ideology?

Political ideology is where you stand on political issues.

Political ideology is a set of beliefs about how government should operate.

Political Ideology is the alignment of political belief systems.

Political Ideology is a term used to describe the beliefs, attitudes, and outlooks of people interested in politics.

Political Ideology is a system of principles that guide the political actions of people.

A political spectrum is a way to show the differences between various political positions. The left end of the spectrum is used for more liberal beliefs, while the right indicates more conservative ideas.

Let’s face it: politics is a messy business. What you see on the news isn’t always what it seems. Sometimes there are two phases to every story!

This is a tough one to answer since there are many different political ideologies out there. Some examples, though, would be liberal, conservative, and libertarian.

Why Do Political Ideology Models Are Important?

It is essential to study political ideology models because they help identify how a person thinks and acts in the real world.

Political Ideology Models are essential in politics because they can help us understand policy options.

Politics is a huge part of our daily lives, and it affects us significantly. Political Ideology Models help us better understand the people we’re talking to and why they believe what they do.

People interested in politics can benefit from understanding political ideology models because they enable us to understand various problems.

It’s important to have models that help us understand political ideology. These models can be used when making decisions about politics and voting in general elections.

Yes, sentiment analysis can be used to detect political ideology. We’ve found that liberals tend to use more positive words and conservatives use more negative ones. While this isn’t 100% accurate, it’s a good indication of one’s political leanings.

When it comes to politics, you can’t please everyone. But if you need a good laugh at the expense of both liberals and conservatives, check out this article about Sentiment Analysis.

The answer was no, even though the sentiment analysis showed that these statements had a negative sentiment. (Note: this is an actual study conducted by researchers.)

What advanced User-Behavior Analytics can tell us about Political Ideology

Political ideologies differ across countries and periods. This is because people with similar interests tend to form groups.

Political ideology is one of the most critical topics in today’s society. Many argue that it impacts how people live their lives, think about others, and interact with each other.

Topic Sentiment is a tool that detects the ideology of a text. It has been used to see political affiliations and stances on social issues.

Ideology detection is a trendy topic in the field of natural language processing.

Ideology detection is a process of identifying the political or social attitude of a piece of writing.

The popularity of ideology detection research has been increasing recently. In this paper, we present a method to detect the dominant ideology in topic texts using topic-sentiment analysis based on terms’ polarity.

The sentiment analysis could be done by comparing texts with a pre-defined list of keywords that might indicate an opinion, such as “love” or “hate.” It can then be determined if the text has a more robust trend towards one extreme than the other.

This is why it would still work for detecting controversial statements. Even though they may not have all the keywords in a dictionary, they would have enough to determine if one opinion is robust.

Computer programs are not intelligent enough to detect what people mean, so sentiment analysis software has become more of an art than a machine act.

The trick with sentiment analysis is that some words look similar depending on typesetters’ or typographers’ preferences. For example, the word “though” can be typed as “tho,” “thou,” or even though.”

This makes it difficult for sentiment analysis tools to classify the word correctly.

Furthermore, certain words have different meanings in different languages, so intelligence needs to be built into each type of language analyzer processor.

Sentiment analysis is the method of finding the sentiment, positive or negative, in a piece of text. It’s often used in customer feedback to employee satisfaction surveys, and marketing materials.

The analysis can identify the sentiment of the subject, and the analyst can predict whether or not their opinion will change.

However, this does not preclude other people from predicting and making decisions based on social interactions and records of previous opinions.

How Facebook Sentiment Analysis Can be Used in Politics

A recent research analysis that Facebook conducted shows how they can predict the outcome of an election.

Politicians are using Facebook sentiment analysis to determine how their messages are being perceived. This can help them know what needs changing or improving to serve the public interest better.

But what about social and cultural attitudes? Let our expert team look at your audience to see if we can do some consulting on the best ways to engage them politically, culturally, or socially. Fill out this form for more information!