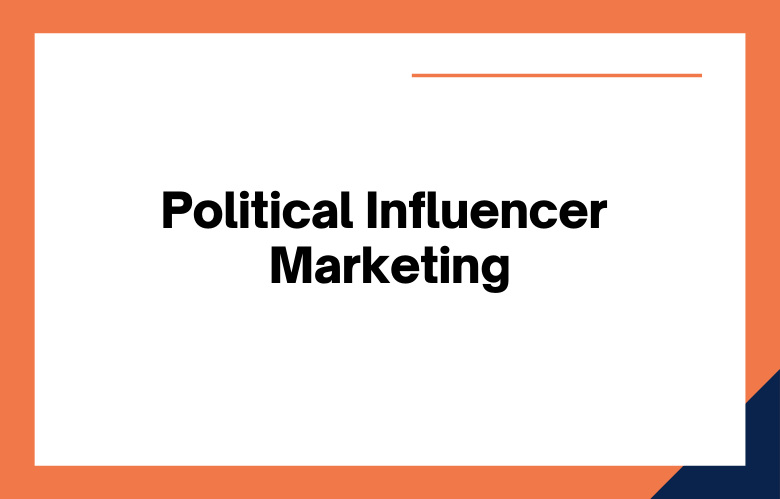 Political Influencer Marketing is a new, innovative marketing strategy that has become more prevalent in recent years. Social media and influencers play a significant role in the success of political campaigns is undeniable.

There are different methods to measure the effectiveness of this strategy; from cost per click on ads to return on investment with each dollar spent, it’s clear that there are benefits while using Social Media channels for your campaign strategy. Read more for tips and tricks on how you can use Social Media and influencers successfully during your next campaign!

These influencers can be journalists, pundits, bloggers, politicians, and many others with a large audience that they can use to sway opinions on topics related to their area of expertise.

Digital platforms allow easy access to information which has created new jobs for people with skills in data analysis and relevant software knowledge; these people work as analysts for campaigns looking at trends in sentiment (positive vs. negative) among voters using social networks such as Twitter and Facebook.

What is Political Influencer Marketing?

Political influencer marketing is a targeted marketing strategy designed to persuade people through social media, with an influential person that the target audience interacts with frequently. These influencers can influence individuals’ perceptions of their experiences and purchase choices via Facebook, Twitter, YouTube, Instagram, and more.

The sentiment analysis algorithm identifies the best candidates based on the nuances in the language used in posts. Then these individuals will receive an advertisement or mobile alerts leading them to download an app or register for something specific like your new educational product release.”

A new form of marketing that relies on influencers in the political sector for promotion and advertisement. Political Influencer Marketing (PIM) can be seen as a subcategory of Opinion Leader Marketing, where opinion leaders with high social capital are expected to generate word-of-mouth by endorsing products or brands.

PIM has risen in popularity against traditional forms of advertising, such as TV and radio ads, which often create false realities that change so quickly they become obsolete. With PIM, there is no need for expensive production costs. It allows for granular targeting at both state level or down to district level allowing for greater complexity without sacrificing cost-effectiveness.

Who are Political Micro-influencers?

Political Micro-influencers act as opinion leaders or pundits in their political party. Their authority to speak is not determined by TV channels, newspapers, or even social media because they have a significant following on one of these channels. It is the responsibility of politicians’ own delivery to try and reach as many constituents as possible through the bounds that Facebook offers politicians, such as custom ads and created filter bubbles for different demographics.

It can be a person with 100k followers up to someone like Sean Hannity with over 3 million followers. This powerful tool has had enormous implications for politics; it’s more complex than ever before for any politician.

Micro-influencers are an individual or organization that generates opinions by convincingly injecting new ideas and needs into small, exclusive networks of individuals.

Micro-influencer marketing is becoming a popular option for brands because of the existing connections that these individuals and organizations have in their particular industries. It’s not uncommon for potential customers to buy from someone they know somehow, which equals better conversion rates with micro-influencers than with traditional advertising models.

Although there may be some overlap between micro political influencers and other actors like journalists, experts, public intellectuals, celebrities, etc., I would say that there is usually a lot more distinction between these different types of individuals given the highly politicized nature of “politics.”

Who are Political Nano-influencers?

Throughout history, and up until the modern-day, there have been some individuals who have had a profound impact on politics. It only fits that with the advent of social media, there has been an increase in the prominence of these people. Known as political nano-influencers, they wield a considerable amount of influence over what their followers think or do through Facebook posts or tweets.

Political nano-influencers are well aware that a Tweet can easily be shared over 100 times and reach hundreds if not thousands in mere moments. They use this to their advantage to market themselves more effectively than ever before – and for free too!

Political nano-influencers are so named because they can shape policy or public sentiment rapidly, in the same way, a virus replicates and overwhelms its host.

They have incredibly high levels of engagement with their followers on Twitter and Instagram. In short, they fill an essential niche for organizations seeking to get messages out quickly and have them amplified through social media channels at strategic moments.

All brands need bloggers to tell their stories so that people will buy the products being sold. However, some brands still recognize an opportunity when one arises – when it comes to specific political issues with genuine opinions on both sides of the debate.

If there is a need for a location-based influencer, it would be best to use someone with common interests – in addition to geography. Of course, this assumes that the campaign’s goal is not to organize groups but rather attract them instead.

Location-based influencers could be used on social media and gossip sites (think Instagram or Facebook). These are trendy media outlets that should connect well to specific demographics, such as suburban females and teens in urban areas. So providing information about political campaigns through them is entirely plausible – assuming they have enough followers with those audiences.

What is the role of Social Media and Influencer Marketing in Political Campaigns?

The role of Social Media in political campaigns is becoming an ever more prominent issue as the world becomes even more technologically connected.

This trend has already been seen in elections. Still, it played a different role then as Twitter and Facebook were not nearly as predominant – making up less than 10% of social media usage.

Nowadays, however, these platforms account for over 56% of all online activity on any given day, making them an inevitable part that cannot be ignored to win a vote.

Influencer Marketing is very effective on these platforms because it only requires one interaction to create brand awareness with their audience, often concentrated around specific interests.

The number of followers and engagement over social media content can gauge the polling result of an electoral race. Social Media can also amplify a candidate’s message through targeted advertising.

How do you select an influencer for your political campaign?

Answer: An influencer in the context of a political campaign is someone who, through mass media usages such as talk shows, TV, newspaper interviews, or school visits, has gained power over large numbers of people. These individuals are often widely known public figures such as actors and authors.

The most commonly used selection technique for finding an appropriate influencer is to find a person that shares the same values with your party. This should be someone who can articulate their beliefs effectively and persuasively in public speeches or writing.

Keep in mind that not every speaker will resonate well with all factions within society; it’s essential to find someone that will reach your target audience effectively and have their message heard by them again and again.

Political campaigns looking for someone whose content already correlates to their campaign message can influence these pre-existing followers by sending them sponsored posts to drive engagement.

Reasons to use Influencer Marketing for Elections

The best way to make a successful marketing campaign is by incorporating the newest, most exciting trends. One of those latest and greatest innovations in digital marketing are political influencer campaigns – that are using top social media channels such as Twitter or Facebook to spread messages about candidates.

This article will discuss how this new type of advertising has been used across the globe with success, as well as what you need from an influencer if you’re interested in running your campaign for your candidate. If you wish to get more information on our services, please get in touch with us.