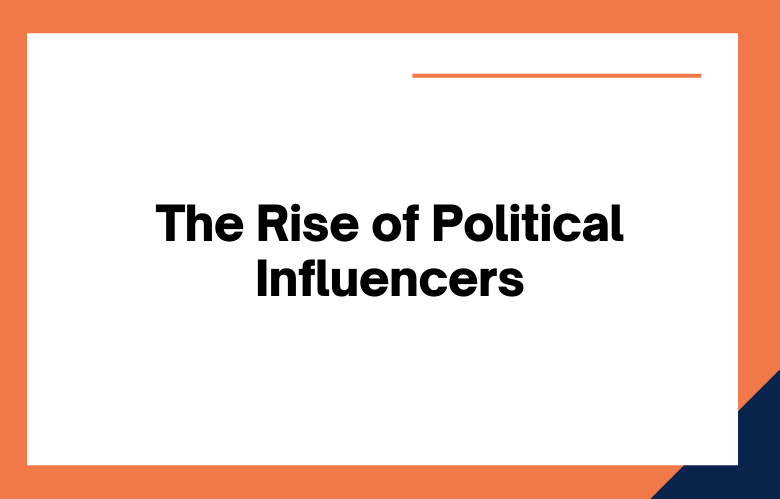 The need for politically influential voices grows as the world becomes more and more complex. To become one of these voices, here are some tips to get started:

With these tips in mind, become a successful political influencer.

What does it take to be a successful political influencer? While the answer to the question varies depending on whom to ask, some essential tips should keep in mind. We will go through four of the most important ones. So, if we are looking to make our voice heard in today’s political landscape.

Who is a Political Influencer?

A political influencer is anyone who can shape public opinion. It can be journalists, politicians, business leaders, or ordinary citizens. What sets it apart is to reach a large audience and convince others to take action.

Many people may think that a political influencer is someone who holds much power or as much money. However, many everyday people can influence politics. Political influencers can be anyone from bartenders to stay-at-home moms. They can affect change by using their knowledge and experiences to engage others in the political process.

The Rise of Political Influencers

The rise of political influencers has created a new landscape of online campaigning. Electorates are no longer receptive to traditional campaign methods. Candidates must now engage with voters on social media and other online platforms to win voters over. It leads to a new breed of politicians adept at using digital media to connect with voters.

We have seen the rise of political influencers over the past decade. These people use their platform to shape public opinion on the issues that matter to them. They can often reach a broad audience and significantly impact the political landscape.

Political influencers have become increasingly popular in recent years. They use the platform to raise awareness of issues and influence public opinion. Their reach is often broad, and their impact can be significant.

Political influencers rise as society increasingly turns to the internet for news and information. These individuals use social media platforms to share their views on the day’s issues, and their large followings give them a significant impact on public opinion. While some political influencers are specialists who focus on a particular issue, others take a more general interest in politics and current affairs.

As the world is becoming digitized, we see a rise in political influencers. These are people who influence to promote or shape political views.

Some political influencers are trendy, with millions of followers on social media. Others are more low-key but no less influential. Regardless of their size or reach, they all have the power to impact politics in a big way.

As we fall into an uncertain future, it is clear that political influencers will only become more critical. They might be the ones who shape the world as we know it.

Politicians have always courted celebrities in the hope of building a star-powered image. Nowadays, young people are just as likely to star on Instagram, YouTube, and Snapchat as traditional celebrities. These digital natives have a considerable influence over their followers, and savvy politicians are beginning to notice.

Some believe that these social media personalities have more impact than traditional celebrities because they speak directly to their followers without any media filter. In the past, politicians relied on celebrities to court voters on their behalf. Now, they are courting the social media influencers themselves.

How to become a Political Influencer

If interested in becoming a political influencer? Here are some tips to help get started. First, research the critical issues and learn as much about them. Then, start sharing opinions with others, either online or in person. Be sure to back up opinions with facts, and be respectful of others’ views, even if they differ. Continue to engage with others on political issues and build a following of people who respect the opinion.

How to become a political influencer? Primarily through developing and communicating the brand. There are a few key steps:

First, cultivate an online and offline following. It helps build credibility and gives a platform to share ideas.

Second, be active on social media, but beware of becoming too identified with one side. It is essential to see somebody willing to engage with all points of view.

Finally, never underestimate the power of face-to-face interactions. They can go a long way to help advance careers and impact the political world.

Start by following the news and keeping up with current events. It helps better understand the issues that matter to people and become more informed about the political process. Additionally, try to build relationships with key figures in the political arena. Getting to know the right people can help access critical information and resources.

Finally, do not forget to use the platform to advocate for the causes. Use voice to raise awareness and drive change. Make a natural variation in the political landscape with hard work and dedication.

Who are passionate about issues? What causes to fight? Once it is known, focus on efforts to become an expert in that area.

Start a blog, launch a podcast, or create videos about the issues. Use social media to amplify the messages and reach more people.

Connect with like-minded individuals and organizations. Attend rallies and protests—volunteer for campaigns.

There are many ways to voice heard and impact the political process. Here are some tips on how to become a political influencer:

If so, there are a few things to increase the chances of success:

Political influencer marketing is a powerful tool to get a message out there.

Contact us to learn about a successful political influencer or help execute a campaign.