Everything You Need to Know About Political Social Media Bots 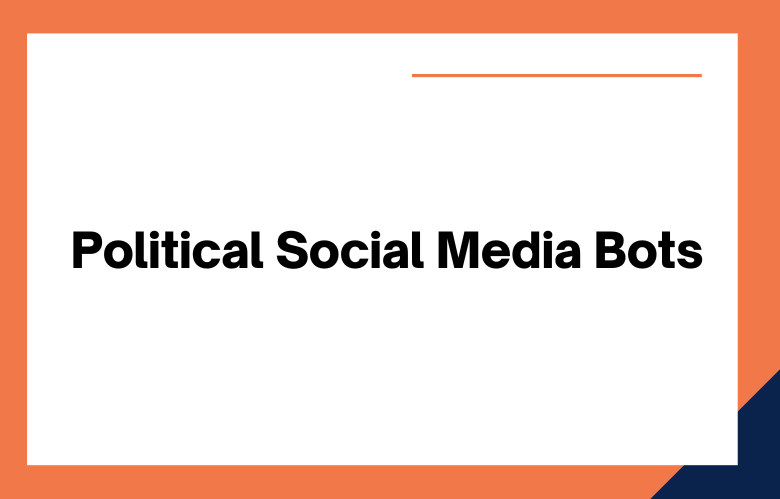 In the era of social media, bots have become a powerful political tool. But what are they, exactly? This blog post will explain everything you need to know about political and social media bots. We’ll cover their origins, their use in political campaigns, and their advantages and disadvantages.

What is a Bot?

It is a software program that automates specific tasks. Social media bots are designed to automate tasks on social media platforms, such as posting content, liking and commenting on posts, following and unfollowing users, etc.

The Influence of Bots in Politics

In the past few years, political bots have become increasingly prevalent and influential in politics. A 2016 study found that nearly one in five tweets about the U.S. presidential election was posted by a bot.

A 2018 study found that Twitter bots were responsible for spreading 30% of all false rumors about French presidential candidate Emmanuel Macron during the 2017 election.

Bots can have a significant impact on public opinion and political discourse. They can also influence public opinion by amplifying specific messages or drowning out others. For example, political bots were used extensively during the 2016 U.S. presidential election to spread misinformation and promote propaganda.

Bots can also mobilize support for or opposition to political candidates or movements. For example, bots were used extensively by both the Leave campaign and the Remain campaign during the 2016 Brexit referendum in the United Kingdom.

Bots were also used by both supporters and opponents of Donald Trump during the 2016 U.S. presidential election.

What are Social Media Bots?

It is a software program that automates specific tasks on social media platforms. For example, a bot might be programmed to automatically like Instagram posts with a specific hashtag or retweet tweets from a particular account. Bots can be used for various purposes, both good and bad.

Bots have been used in political campaigns for years now. In the United States, political campaigns use bots to communicate with potential voters on Twitter and Facebook. For example, a campaign might use a bot to automatically tweet links to positive news stories about the candidate or to send out mass Facebook messages inviting people to attend a rally.

There are some advantages and disadvantages to using bots in political campaigns. On the plus side, bots can save campaigns time and money by automating tasks that would otherwise be done manually.

They can also reach large numbers of people very quickly. On the downside, bots can give campaigns an unfair advantage by amplifying their message more effectively than their opponents’ messages. Additionally, bots can spread false information and disinformation, which has become increasingly common in recent years.

What are Political Social Media Bots?

For example, during the 2016 U.S. Presidential Election, it was revealed that Russian-linked Twitter bots were responsible for spreading fake news stories to sway the election in Donald Trump’s favor.

A social media bot is software that automates specific tasks on social media platforms. When it comes to political and social media bots, these tasks typically involve amplifying a message or spreading disinformation. For example, a bot may be programmed to automatically retweet a politician’s posts or share articles from a specific news outlet.

Why are the Bots being used more and more in Politics?

There are a few reasons for this:

This is a tricky question. There is currently no federal law explicitly regulating social media bots. However, the Federal Election Commission has proposed rules prohibiting bots’ use for campaign purposes. These proposed rules have not been finalized yet, so it remains to be seen whether they will be enacted into law.

The Use of Political Social Media Bots

Actors around the world have used political and social media bots for a variety of purposes. For example, in the United States, bots have been used to spread disinformation about political candidates and mobilize voters.

Here are some common characteristics of political and social media bots:

Political bots are becoming an increasingly prevalent and influential force in politics. While they can significantly impact public opinion and political discourse, it is essential to remember that not all bots are created equal; some bot-generated content is more reliable than others.

Social media bots are a controversial political tool. Some argue that they give campaigns an unfair advantage, while others claim that they’re simply a time-saving measure.

However, there’s no denying that bots have become an integral part of modern political campaigning. As we step into the 2024 election season, we must be aware of their presence and influence.