How Sentiment Mining Can Help Your Political Campaign 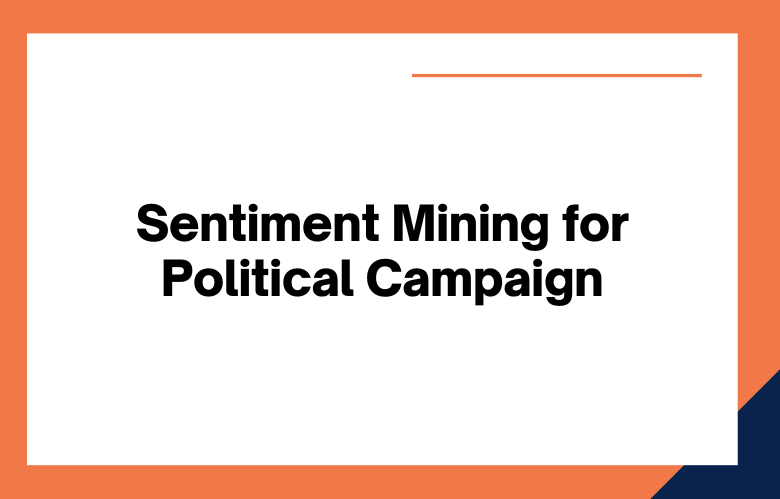 In these politically charged times, campaigns are more important than ever to be in touch with what the public is saying. One way to do this is through sentiment mining, extracting information from the text to determine the writer’s opinion.

This can be done through social media posts, online reviews, survey responses, and more.

Political campaigns are complex, and many things go into winning a race. However, understanding public sentiment is one of the most important aspects of any campaign.

Sentiment mining can help your team understand what the electorate thinks about critical issues and how they feel about your candidate. This information can be invaluable in deciding which issues to focus on and tailoring your message to resonate with voters.

As a political campaigner, you know that every vote counts. In today’s digital age, it’s more important than ever to use technology to your advantage.

Sentiment mining is one way to do just that. By analyzing public sentiment on social media and other online platforms, you can better understand how the electorate feels about your campaign and your opponent’s. This information can help you fine-tune your message and effectively target undecided voters.

So if you’re looking for an edge in this year’s election, consider using sentiment mining tools to give you insights into the minds of the voting public.

What is Sentiment Mining?

Sentiment mining is extracting these sentiments from a given text corpus (an extensive collection of texts). It can be done through various methods, but the most common involve using Natural Language Processing (NLP) techniques to analyze the text and identify patterns.

Sentiment mining is the process of extracting feelings and opinions from the text. It can gauge public opinion on a given topic or generate insights about customer sentiment. Sentiment mining relies on natural language processing and text analysis techniques to identify and classify emotions in text.

Sentiment mining can analyze social media posts, reviews, survey responses, and other forms of user-generated content. It is an essential tool for businesses, marketers, and researchers who want to understand how people feel about a given product, service, or issue.

Sentiment Mining, also known as opinion mining, is extracting opinions from the text. It is a relatively new field, only emerging in the last decade with the advent of natural language processing and machine learning.

Sentiment Mining algorithms are designed to automatically identify and categorize opinions expressed in text as positive, negative, or neutral. This can be used to measure the overall sentiment of a document or to detect specific views within it.

Sentiment Mining can be applied to various tasks, such as product reviews, customer feedback, and social media posts. It has even been used to study public opinion on controversial topics such as climate change and gun control. As Sentiment Mining technology continues to evolve, it will likely have an increasingly important role in business, marketing, and research.

How does Sentiment Mining Work?

This includes whether they are happy, angry, Sad, etc.

The goal is to understand better how people feel about a particular topic.

Sentiment mining works by looking at the context of words to infer the emotions behind them.

For example, if someone says they “hate” something, they likely have negative feelings towards it.

However, if someone says they “love” something, they likely have positive feelings towards it.

Understanding the sentiment behind words, we can better understand how people feel about things.

NLP algorithms can identify specific patterns in language usage that can use to determine the sentiment of a text document.

NLP algorithms can also consider the context in which words use to refine their analysis further.

For example, “good” might be used positively in a sentence like “I had a good time at the party.”

However, the same word might be used negatively in a sentence like “food was tasty, but service was terrible.”

As a result, NLP algorithms can provide a more detailed and accurate sentiment analysis than possible with traditional methods like human coding.

NLP is a branch of artificial intelligence that deals with understanding and manipulating human language.

Once the relevant posts have been identified, they can be analyzed to determine the most critical topics to the people expressing those opinions.

This information can fine-tune a campaign’s message and target its advertising.

For example, if sentiment miners discover that a particular candidate is generating a lot of negative buzz on social media, the campaign could adjust its messaging accordingly.

Why is Sentiment Mining Important?

In political campaigns, sentiment mining can be used to track how people feel about the candidate or party.

This information can then be used to make necessary changes or tweaks to the campaign strategy.

For example, if the sentiment around a particular issue is mostly negative, the campaign might avoid that issue altogether.

Or if there are concerns about the candidate’s likability, the campaign might focus on highlighting their personal story more.

In a political campaign, it’s essential to understand how voters feel about the issues that matter to them.

Sentiment analysis can give you insights into what people say about a particular issue on social media, in the news, or in face-to-face conversations.

This information can be used to inform your campaign strategy and help you make decisions about where to allocate resources.

Why Sentiment Mining is Important for Political Campaigns

Political campaigns need to be able to adapt quickly to changing public opinion.

Sentiment mining can track people’s feelings about a particular issue and help shape a campaign accordingly.

For example, if sentiment towards a particular candidate starts to decline, a campaign can use sentiment mining to figure out why and take steps to course correct it.

Sentiment mining can identify potential supporters and target them with campaign messaging.

In today’s hyper-connected world, social media is the most powerful tool for shaping public opinion.

And given the amount of information shared on social media platforms daily, sentiment mining can be an invaluable tool for understanding what voters think and feel about the issues that matter to them.

During a campaign, sentiment mining can track changes in public opinion in real time and adjust campaign strategy accordingly.

For example, if sentiment around a particular issue shifts negatively, a campaign could respond by releasing a new ad or issuing a statement addressing voter concerns.

Or, if sentiment toward a candidate starts to decline, a campaign could focus its efforts on grassroots organizing or retail politics to regain voter support.

How to use Sentiment Mining

You can use sentiment mining for your political campaign in a few different ways.

First, you can set up Google Alerts for key terms related to your campaign.

Finally, you can use surveys to collect data from people directly.

The Benefits of Sentiment Mining

Sentiment mining provides campaigns with real-time insights into public opinion on the issues that matter most to voters.

This information can tailor a campaign’s messaging and focus its advertising budget on maximizing its chances of success.

In addition, sentiment mining can track a campaign’s progress over time and identify areas where improvement is needed.

Applications of Sentiment Mining in Politics

Using sentiment mining, political campaigns can track how the public feels about their candidate in real-time and adjust their strategy accordingly.

For example, if sentiment towards a candidate declines, the campaign can quickly identify why and take steps to address the issue.

How to set up a Sentiment Mining System

The first step in setting up a sentiment mining system is to choose the right software. There are several options in the market, but all are different.

For example, some software platforms only offer basic features, while others come with more robust tools. When choosing a platform, be sure to consider your needs and budget.

Once you’ve chosen a platform, the next step is to create search queries.

These queries will be used to scour the internet for mentions of your campaign, your opponent’s campaign, and relevant issues.

Be sure to use a variety of different keywords and phrases so that you can get a well-rounded view of what people are saying.

How to Interpret Sentiment Data

The next step is learning how to interpret sentiment data. The most important thing to remember is sentiment is not black and white; it falls from positive to negative.

This means that even if the majority of sentiment is negative, there may still be some positive things being said (and vice versa).

It’s essential to look at both the overall tone and individual mentions when analyzing sentiment data.

Additionally, context matters when it comes to interpreting sentiment. For example, if someone tweets, “I’m so angry at Candidate A,” that might not necessarily be negative sentiment; they could be passionate about an issue.

To better understand context, consider reading through a selection of comments or posts rather than just looking at the numbers.

It’s important not to track just pure negativity or positivity; you want to look for changes in sentiment over time. It gives you a good indication of whether your campaign is gaining or losing support.

How to use Sentiment Data in Your Campaign Strategy

Now you know how to set up a system and interpret the data, it’s time to start using it in your campaign strategy! A way to do this is by using sentiment data to identify potential supporters and influencers.

Look for people who have positive things to say about your campaign and reach out to them; they could be valuable allies in your quest for victory!

You can also use sentiment data to keep tabs on what people say about your opponent’s campaign; this way, you can anticipate their moves and stay one step ahead.

Finally, remember to keep an eye on changes in sentiment over time; this will help you adjust your strategy as needed so that you can always respond in the most effective way possible!

Sentiment mining can be a valuable tool for political campaigns trying to stay in touch with public opinion.

By tracking what people say online, campaigns can make necessary changes to their strategy in real time.

If you still need to start using sentiment mining in your campaign, now is the time to start!

Although sentiment mining for political campaigns is still in its early days, it shows great potential.

The technology can provide accurate insights into the overall mood of the electorate and help campaigns better target their messages.

Contact us today if you’re interested in learning more about how sentiment mining can benefit your campaign. We offer expert Political Social Media Campaign Consulting to help you win on election day.