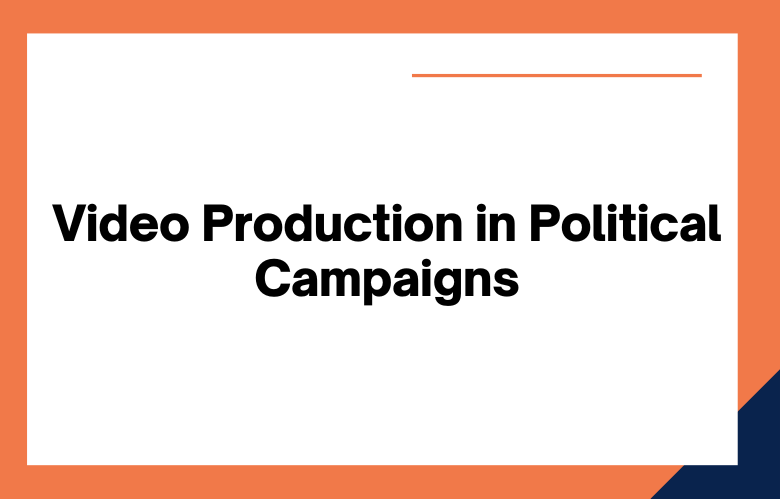 In the present world, where people are instantly bombarded with news and information from all sides, it is hard to go through the noise and reach your target audience. This is especially true for political campaigns, which is why video production is so important.

A well-made video can help a campaign communicate its message clearly and effectively, reach a broad audience, and persuade voters. Here’s a quick view of the importance of video production in political campaigns.

A political campaign is an organized effort to influence a specific group’s decision-making process. In democracies, campaigns often refer to electoral campaigns by which representatives are chosen, or referendums are decided.

Other campaign tools include debates, distributing pamphlets or other literature, and holding rallies. Door-to-door canvassing, telephone banking, get-out-the-vote drives, and the production and placement of advertising all play a role. Most important in any campaign is raising money to pay for these tools.

The Power of Persuasion

Humans are visual creatures and are more likely to be persuaded by something we see than something we read or hear. This is why video production is so powerful in political campaigns. A video can communicate a campaign’s message clearly and emotionally, more likely to persuade voters than a text-based message.

Another reason why video production is essential in political campaigns is that it allows you to reach a broad audience. People can see videos with just a few clicks, thanks to the internet. This is an invaluable tool for political campaigns trying to get as many people as possible.

In addition to persuasion and reach, video production allows campaigns to add a personal touch that text-based messages can’t match. Video lets voters see and hear the candidate speaking directly to them, creating a sense of connection and Trust.

This video should also include footage of the candidate interacting with regular people to show that they relate to and understand the problems faced by everyday citizens.

After the announcement video has been released, the stump speech video is the next piece of campaign collateral that a candidate will remove. The stump speech is a short speech the candidate delivers at various events during their campaign.

This speech will typically outline the critical points of their platform and explain why they are the best person for the job. The stump speech video should be edited to be under 2 minutes long and focus on delivering the key points of the candidate’s platform in an engaging and easily digestible way.

Unfortunately, negative campaigning has become a staple of modern-day politics. An attack ad is a political advertisement that seeks to discredit an opponent or rival candidate through fear-mongering, character assassination, or other means of mudslinging. Attack ads can effectively sway voters and should be carefully considered before release.

When crafting an attack ad against an opponent, it is essential to ensure that any claims can be backed up with evidence. These ads are typically concise, no more than 30 seconds in length, and deliver their message directly and concisely.

It should be noted that releasing attack ads carries with it a certain amount of risk. There is always a possibility that voters will react negatively to such negativity, which could backfire on the candidate releasing them. As such, candidates should be very strategic when considering whether or not to terminate an attack ad during their campaign.

In the age of social media, campaigns are more important than ever to create easily shareable content. There is no other way to do that than with video. A study by BuzzSumo found that videos are shared 12 times more than text and image posts combined.

When a video goes viral, it reaches millions of people and significantly impacts a campaign.

A study by Nielsen found that 64% of respondents said they were more likely to buy a product after watching a video about it. When used correctly, video can effectively build with potential voters.

By giving voters a behind-the-scenes look at the candidate and their team, videos can humanize the campaign and make the candidate appear more relatable.

Videos are used for multiple purposes, from stump speeches, and fundraising appeals to harmful ads and get-out-the-vote efforts. No matter what the goal of the campaign is, there’s a good chance that video can help achieve it.

Humans are visual creatures and first impressions matter. When potential voters see a candidate for the first time, they will form an immediate opinion based on what they see. And if they know a low-quality, amateur video, that will not reflect well on the candidate.

On the other hand, if they see a well-produced video that tells a compelling story, they’re likely to be impressed and intrigued.

To win over voters, candidates need to create an emotional connection with them by creating a video. With video, candidates can tell their personal stories in a way that allows voters to see them as real people rather than faceless politicians. When done correctly, this can be an incredibly effective way to win over hearts and minds.

A successful political campaign tells a story—the story of the candidate and why they are the right person for the job. This story needs to be carefully crafted and communicated in a way that resonates with voters.

Video is the perfect way to tell a story, as it allows campaigns to show rather than tell their story in an engaging and visually appealing way.

Video Production can help a candidate connect with Voters on a personal level.

In a political campaign, a candidate’s goal is to connect with as many voters as possible. One of the ways to do this is through video production. A campaign video allows candidates to tell their story in their own words and show who they are as a person. This is a crucial way to connect with voters on a personal level and build Trust.

Video Production can help a Candidate communicate their message effectively.

A political campaign is all about messaging. A candidate needs to be able to communicate their message clearly and concisely. Video production can help with this by allowing candidates who use video effectively to connect with voters and share their news relatable and memorable way.

The candidate controls the narrative and ensures that their message is displayed effectively.

Video Production can help a Candidate reach a broad Audience

In today’s digital age, it’s more important than ever for candidates to have a solid online presence. A campaign video can be posted on social media or the website and shared with potential voters. This is an effective way to reach a broad audience and ensure that people see the campaign message.

As you can see, video production plays a vital role in political campaigns. If you’re running for office, invest in high-quality videos to help you reach voters, communicate your message, and build Trust with the electorate.

The importance of video production in political campaigns is evident. Voters are more likely to be engaged and persuaded by videos that they see online. It is essential to catch the pulse of your target audience and what will resonate with them to create a successful video.

Contact us today to help create a powerful video campaign to reach your voters and persuade them to vote for you!