Why Analytics is the ‘Secret Sauce’ of Political Campaign success 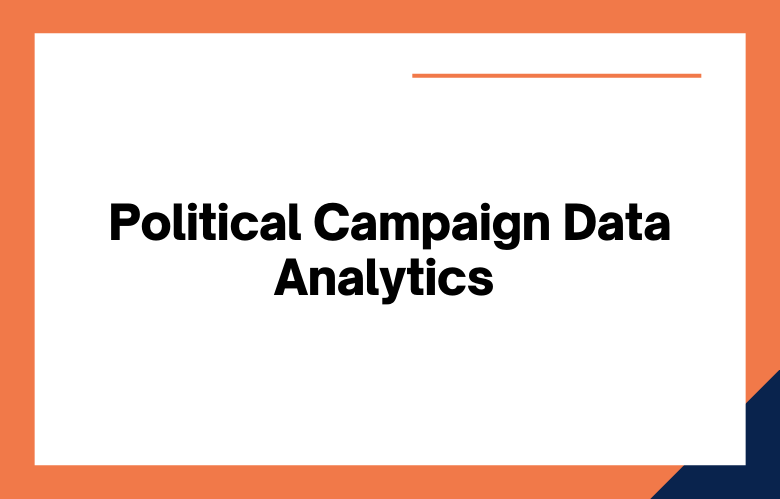 Analytics is the “secret sauce” of any successful political campaign. It can inform decisions on fundraising to advertising, messaging, and canvassing techniques. The data collected by analytics will tell you what your supporters respond well to focus all your energy on those things during the campaign. This allows for more efficient use of resources, which means more time spent campaigning than fundraising or planning ads.

“Political campaigns are notoriously difficult to win. Several variables that need to be considered are staggering, and the margin for error is razor-thin. It’s no wonder why most campaigning organizations employ a mix of analytics experts with traditional campaign managers.”

“Analytics professionals provide invaluable insight into what voters want and how to reach them through social media or television ads. They also measure success by the conversion rates on email sign-ups and donations, as well as providing data on voter turnout at campaign events.” “Without analytics in their arsenal, political campaigners would be flying blind – unsure if they’re winning or losing the battle.”

Political parties will obtain data on behalf of every voter, allowing them to know a good deal about the individual and their interests and preferences. Parties, Campaigns, and candidates will use this information to “nudge” voters to the polls. There’s a power to this. Some worry it may be abused.

Political campaigns will be very different. Campaigns will be costly to run, and the amount of information being fed to voters will be very high. Therefore, it will become increasingly important to utilize accurate, big data analytics to inform strategies, tactics, and messaging to reach, persuade, and turn out voters effectively.

Politicians and candidates will work alongside professional services firms specializing in big data and data analytics. These firms will be a critical part of the candidate’s campaign team. Individuals on the campaign team will lean on the firm’s expertise to turn the massive amounts of data into fresh insights and analytics, helping the team gain critical insights essential to staying on target and message with their constituents.

Organizations will increasingly be able to assess the effectiveness of political activity such as speeches, yard sign placement, media advertising, and fundraising on organizations’ decision-making practices and mobilization success.

Campaigns will be run more efficiently because of better analytics to guide decisions.

Campaign analytics tools will have automated polls, asking each voter every day what they think about the issues. They will have continual dial testing of the advertisements, and the pollsters will poll the voters in real-time instead of once every month or so. They will be able to target messages relevant to specific geographic areas. The networks will test their political advertising for three or four months before they ever put it on the air.

Politicians and their campaign managers will use large data sets that contain all the media platforms, including web-based content, social media, mass media, and television. The analysis of this data will help them create media plans and messages to influence the behavior of voters. Dozens of political campaigns will eventually use professionals with media analytics specialties. The way candidates are elected, govern, and how citizens conduct their lives may be changed by data-driven media analytics work.

Political campaigns will use predictive analytics to understand voters’ political behavior patterns and customize messages to persuade voters with advertisements and issue positions that closely match those voters’ belief systems.

The technology will help political campaigns to be more efficient and better strategize. Political campaigns will have the capability to apply advanced mathematical modeling, artificial intelligence, and data mining.

Political campaigns will emphasize social media, analysis of that data, and use of data analytics.

Politicians will have vast amounts of information readily available on where to focus their campaign efforts, where the voters are, how much money they make, and who they vote for.

Political campaigns will have a lot of data at their disposal. Data miners and analysts will have to work together to ensure that campaigns have enough information to deliver the right message to the relevant voters. Because of this need for information, data mining will become an increasingly important political campaign activity in the future.

Political campaigns will use digital tactics, like website design and social media, to identify and activate supporters. And, by automatically picking up voters’ preferences and personality traits, they will use that data to tailor the specific messages and political arguments presented to each voter. This tactic is called “microtargeting.”

The winning or losing of Elections depend on algorithms. These algorithms will predict voter behavior and more precisely target a candidate’s message based on voter needs and want, issues, geographic factors, and more granular information such as a consumer’s spending habits.

Political campaigns will conduct “massive” amounts of research and data mining on voters to win elections. They will also try to use many digital technologies to target voters.

Political campaigns will be increasingly data-driven. The drives will use information technology not only for storing, analyzing, and retrieving data but for improving their get-out-the-vote and voter identification programs and communication with and solicitation of voters.

Increasingly, data will be the basic level for all campaigns, coupled with the supercomputers and the ability to run predictive models. The democratization of data will change politics. And it will also have a substantial effect on our culture and the way we see ourselves.

Big Data technology in politics will allow campaigns to collect, distribute, and target political messages to specific voters more quickly. This will lead to ever-increasing amounts of information and faster interactions with voters. The vast amounts of new data will give campaigns unprecedented insight into the political minds of citizens, candidates, and voters.

A political campaign’s success relies on the right strategy and tactics. According to Campaign Monitor, one of these is analytics, or “the secret sauce of data-driven campaigns”. The company shared some insights into how this works in an article published last year.

With a wealth of information about voters embedded in their databases, they can make strategic decisions based on what motivates them to vote for you rather than your opponents.

If you are looking for help with any aspect of analyzing your marketing efforts – from determining which emails are most effective to understanding why people buy specific products online – contact us today!

We have helped clients across industries identify trends that drive revenue growth through behavioral analysis and predictive modeling techniques.