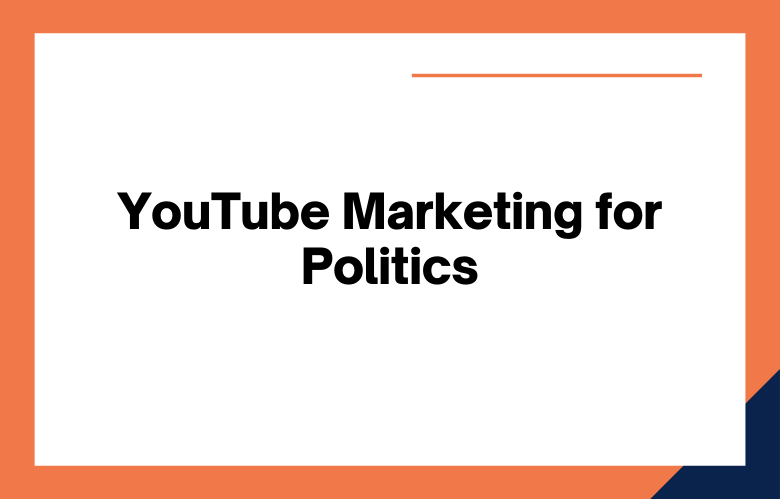 A new study by the Pew Research Center has found that YouTube is the most popular social media site for U.S. adults aged 18 and older, with 85% of them using it. It’s no surprise then that politicians are turning to YouTube to reach voters during their campaigns. This blog post will discuss some tips on how to run a political campaign on YouTube successfully.

Running a political ad campaign is not an easy task. There are several factors to consider, and it can be challenging to know where to start. This post will let you know how YouTube marketing can benefit your campaign by providing valuable information on the best practices for video production and promotion and how Google AdWords ads can boost your visibility in search results.

YouTube has been a great way for politicians to connect with voters.

If you’re interested in politics, YouTube is a great way to expand your network and grow an audience.

If you’re running for office, YouTube is one of the most important places to promote your campaign.

If you’re a politician, then YouTube is the perfect platform for your campaign. It’s free and gives you access to millions of people looking at content and videos on the subject that you want to put out there.

Political campaigns are often started without looking at the bigger picture. The effective way to win an election is through YouTube marketing.

How To Successfully Run a Political Campaign On YouTube

The most significant aspect to consider when creating YouTube videos as a politician is whether you should make them on your channel or not.

The secret to a successful political campaign is using YouTube. The website allows you to reach out to people in ways traditional mediums can’t.

When planning a campaign, you need to keep it simple. To build trust with your audience, make sure that every video is well-designed and professional-looking.

YouTube is a common platform used by politicians to campaign and spread their political message. However, it’s essential for them to be aware of how YouTube works for the video content to have a successful viral impact.

A significant task is picking a great title. This is what the audience sees before they click on your video, so it needs to be enticing and catchy.

In my opinion, you should have a tight script with clear goals and objectives. Use common sense, but also be creative for your viewers.

There are few ways that you can make political videos successful on youtube. Number one, be yourself. Number two, find a way to cut through the noise and stand out from all the other people making political videos on YouTube.

One of the best strategies for successful political videos is to ensure that you have a good script. Your video should be engaging, and it shouldn’t be too long or short. Also, do not make your audience confused with conflicting statements.

To make a successful political video, there are some things you should do. One is to pick a good topic that will appeal to voters. Another is to get your facts right and research what you’re talking about.

How to get started with YouTube Marketing for Politics

Having a YouTube channel is an effective way to get your message out. If you’re interested in marketing, you should consider starting one for politics.

Firstly, you need to know the different types of accounts on YouTube. An account, channel, and video are three other things that make it easy to confuse them if you’re new.

To spread your campaign message, make use of YouTube.

If you want to start a YouTube channel for your political campaign, some essential things to consider.

YouTube is one of the most trending social media networks. You can use it to create a fan base for your party or candidate.

If you’re running for a political position, YouTube is one of the best ways to get your message out. You can even edit and upload videos directly from your mobile device!

It’s important to use social media to promote your campaign because it allows you to reach a new audience and expand the number of people who can see what you’re saying.

If you’re running for office, using YouTube as a marketing medium is one of your best bets. It’ll allow you to reach more people and get your message across in an effective manner.

If you are running an election campaign, you have to use YouTube. It’s the best way to reach all your potential voters and even get some donations from them!

YouTube is an excellent way the promote your political campaign. Not only can you reach voters, but the video content will be preserved for posterity.

Using YouTube to market politics is a great way to spread the word about your beliefs. There are two main ways to use video marketing for politics, and they both have their benefits.

If you have a political campaign, it’s important to discuss all your platforms through online media. One of the trending social networking sites is YouTube. It’s easy to create your channel and upload videos that can be viewed by millions.

YouTube is an excellent tool for politics because it’s free, easy to use, and has many potentials.

The internet revolutionized the way political campaigns are running. One of the most influential online platforms is YouTube, where videos and tutorials can be used to reach out to voters effectively.

Common Mistakes in Online Political Campaigns and How To Avoid Them

When you’re running an online political campaign, it’s essential to address your mistakes. If you don’t know what they are, this article is a great place to start.

It’s essential to have a political campaign that people can relate to. The most common mistakes I see are running an impersonal campaign and not connecting with voters on any level.

The best online political campaigns are the ones that work to avoid common mistakes while focusing on what works.

One of the most common mistakes that political campaigns make is not having a clear message. This can be avoided by knowing your audience and what you want to say about yourself.

According to the research done by Buzzfeed, candidates are using YouTube’s recommended video feature to boost their number of views.

A new study has found that some political candidates have been paying people to increase their YouTube views.

Did you know that a new study from the University of Indiana shows that politicians are buying YouTube views to boost their Internet presence and popularity?

One of the more interesting aspects of how YouTube works is that companies and individuals can buy views for their videos.

The study that suggests political candidates are buying YouTube views is quite interesting. It’s not exactly the most ethical business practice, but it does seem practical.

One of the most recent examples is when Hillary Clinton’s team created a video where she shows off her dance moves, and people were able to share it on social media.

One example of a successful political campaign on Youtube is PM Narendra Modi’s channel. He used Youtube to connect with his supporters and spread the word about him as PM.

Either running for office or supporting someone else, YouTube is a powerful tool to reach your target audience.

However, it is not enough to create an account and wait for people to find you; there should be some strategy behind the content that will make them want to watch. In this blog post, we’ve highlighted ways of successfully utilizing YouTube as part of a political campaign by highlighting successful examples from all over the world.

We hope these tips help inspire new ideas on how best to utilize one of today’s most popular social media platforms to succeed!