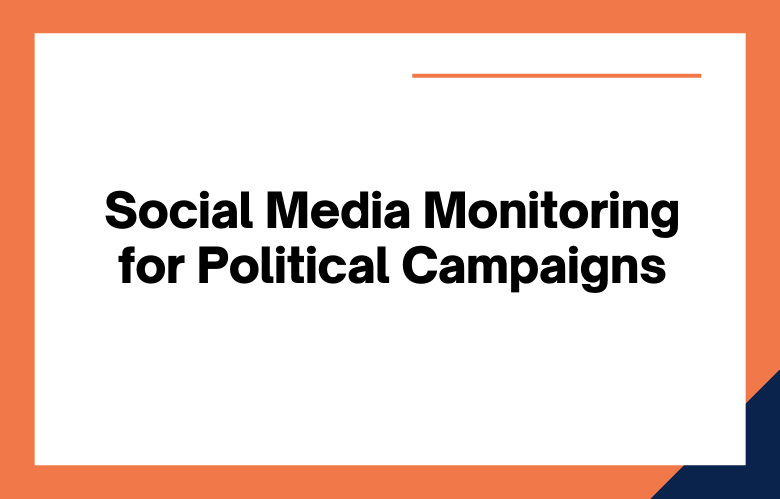 Social media monitoring in political campaigns is used to analyze the sentiment of voters and adversary candidates. It can help a campaign understand what issues are most important to people, which topics they care about more or less, and how they feel about various candidates before polls open on election day.

As well as traditional news outlets like television networks and newspapers. This type of information is also valuable after the election because it will give companies an idea of how their customers think about them through social interactions with their company’s products or services online during a specific period.

Not so long ago, politicians and their campaigns would rely on face-to-face interactions, advertisements in the newspaper, or TV.

Nowadays, with social media monitoring, they can use tools like Google Analytics to monitor what people are saying about them online.

Politicians now know what is being said about them before it’s even published! Social media has changed how politicians campaign for office by giving them a new platform to engage directly with voters.

Some people claim that social media influences political campaigns more than traditional methods such as door knocking and phone banking.

Political campaigns can use social media monitoring on several levels – from simply looking for feedback about campaign messages and the competition to #hashtag monitoring, sentiment analysis, and more.

A sophisticated understanding of digital conversations is beneficial for maintaining connections with voters and capturing their attention, leading discussions across hashtags or interest groups toward thematic goals such as fundraising, building candidate profiles, early voting initiatives.

A candidate can use social media monitoring to gauge public sentiment on an issue by searching for keywords related to the topic.

The campaign manager then analyzes surveys of the different demographics that they are targeting in their campaign. This allows them to tailor their message for specific audiences and win more votes.

What is Social Media Monitoring for Political Campaigns?

Social Media Monitoring for Political Campaigns examines the trends, sentiment, and ‘hottest topics’ to show what people are talking about at any moment. This way, campaigns can get a sense of how potential voters are receiving them. For example, let’s say that three voters mention Candidate A in unfavorable light on Facebook.

We may assume that this story does not paint Candidate A in the best light-and when put together with other data points like this one- may be cause for alarm to any political campaign looking to keep their candidate up when running against an opponent who has swayed many supporters over Twitter or Youtube videos.

The simple definition of social media monitoring is that it uses software to detect and analyze behaviors, opinions, or conversations on social media channels.

Numerous applications of the theories and techniques developed for social media monitoring and analysis, especially in political campaigns.

One such application of the technology is targeted advertising via Facebook Custom Audiences based on predicted values for demographic groups who align with voter files, regional identification, or behavior insights from Twitter sentiment analysis.

For example, if a campaign has identified voters who were more likely to purchase goods online than attend events, they might promote their candidate through advertisements on relevant e-commerce websites.

The best way for a politician to stay in touch with the people is through social media. For example, an excellent place to start is Twitter because it’s simple and easy to use. Besides being practical, it’s also very cheap when compared to others.

Social media is the top channel to keep track of what’s going on in your communities.

These tools can help you track the conversations about your candidates and competition across all social media channels.

Campaigns are always looking for ways to reach out to more people. Social media monitoring is an excellent way to do this because it allows the campaign team to identify conversations about the campaign that happens online quickly.

If a politician wants to appear as an expert in social media, they should start with Twitter.

Social media is one of the most powerful tools out there. It has changed how we connect and communicate with each other.

Social media listening is a great way for politicians to get feedback from the public. It’s also an easy way to find out what people are talking about regarding your campaign or political party.

Social media is an excellent tool for politicians. They can listen to the people, understand their concerns, and effectively address them.

The most powerful politician on social media was Donald Trump. His Twitter account had more followers than any other candidate during the election cycle.

Social media listening is a great way to get information about the people you’re trying to target.

With the power of social media, it is now possible to reach millions of people within minutes. This has revolutionized how political parties operate and reach out to their voters.

This research makes it easier for corporations to decide who they will vote for.

Did you know that listening to social media is an effective way to gain insight into the political party’s culture and what they want?

Social media listening is a great way to understand what people are saying about your political party. It can help you determine the issues that matter most to voters, which policies they support and why, and how other parties are targeting them.

Social media listening is the act of analyzing social media data to gain valuable insights into what people are saying about a candidate or political party. Done right, this can help candidates target their messages more effectively and identify trends that could foreshadow election results.

Social media listening is a significant part of political campaigns. It helps you better understand what the people are thinking, how they feel about issues that concern them most, and their interests.

Social Media is a powerful tool that has been used to influence public opinion and inform voting decisions.

The only method to get the most out of social media listening is by using software that allows for accessible data collection, visualization, and interaction with other tools.

Social media is a powerful tool in the hands of politicians. It allows them to monitor what their constituents think, and it also gives them an outlet to communicate with voters.

Social media is a powerful tool for government agencies, making it a prime target for malicious hackers.

“Social media listening is a method for monitoring the vocabulary and sentiment of social media users. The purpose of this type of analysis is to gain insight into consumer needs, wants, preferences and concerns.”

As more people are heading towards social media for public engagement, government use is also growing. Social media listening allows governments to collect data on citizens’ opinions and sentiments about their governments or related policies, events, and programs.

The Facebook page for the candidate was often the most critical part of a political campaign. A more robust presence on social media will help bring in more voters, and it also allows candidates to communicate with supporters in new ways.

The social media metrics for political campaigns have evolved rapidly over the past several years. Facebook, Twitter, and other social media outlets have allowed politicians to reach millions of potential voters cost-effectively.

Social media monitoring has become a powerful tool for political campaigns, but it’s not enough to monitor social channels. You need to be able to analyze the data and then use that information strategically efficiently. That’s where we come in! Our expert team can support you with all aspects of your campaign, from content creation and analytics implementation through voter targeting strategies so you can win over voters. We offer our services on retainer or as needed depending on your budget and timeline needs; if this sounds like information you are looking for, contact us today!