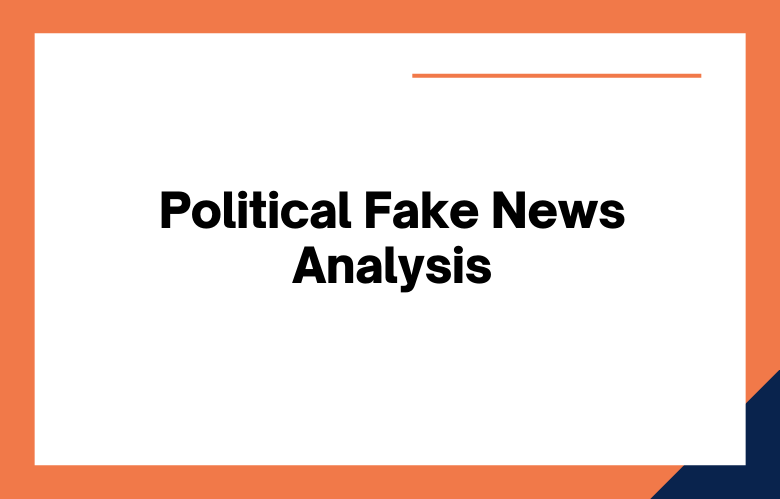 Fake political news has been a hot topic of conversation for some time now, but it’s only being discussed in the mainstream media more recently. For those that don’t know what I’m talking about: fake news is currently created to be politically persuasive.

It goes viral on social media platforms like Facebook and Twitter because they’re so believable. This article will use sentiment analysis to detect fake political news by looking at the sentiment expressed within each piece.

Sentiment analysis is the method of determining the attitude of a speaker or writer concerning some topic, typically by examining linguistic patterns such as individual words.

What is Fake News?

Fake news is a plague in today’s media. It tricks people out of their money, and worst of all, it has divided the country!

People have been misinterpreting facts and spreading lies for years. These days, “fake news” describes false information or stories created to mislead others.

Fake news is information that’s deliberately constructed to deceive someone. It could be a political post on social media, an article in the newspaper, or even an advertisement.

Fake news is a type of content that appears to be truthful, but in reality, it’s false.

The term “fake news” came in the 18th century to define satirical news that made fun of political figures and events.

What is Political Fake News?

Political fake news is false information that’s created to influence the public. It can be used to make a political party or candidate look good while discrediting their opponents.

Fake news is a type of journalism that consists in making up false stories and distributing them on social media. The goal is to influence public opinion and generate profits for the author.

Fake news is a type of journalism where the creator or publisher of content makes up information to deceive its audience. This can be done for money, politics, entertainment, and even propaganda purposes.

Political fake news is false information that has been created to sway political opinion. The rise in popularity of social media alongside the current political climate makes it easier than ever to spread propaganda.

What is Fake News, and how it works?

Fake news is false information disguised as real news. It may be shared online through social media sites like Facebook or Twitter, or it may be written into an article and published in newspapers.

Fake news is when a website exaggerates the truth to create false stories.

Fake news is not true, usually because it was made to deceive or manipulate people purposefully. People use fake news for different reasons like political gain or just for fun.

Sentiment Analysis is an effective tool to detect fake news. The purpose of this project was to develop a sentiment analysis algorithm that can detect if an article fits the criteria for being labeled as fake news, such as articles that are blatantly false and written.

The Fake News Detection system will scan the news article and check if it is biased towards a particular political figure.

From the beginning, politics has been an area of interest for many. It is essential to keep up with political news because it can change your life in a blink of an eye.

In this era, the top political news stories of the day are usually controversial. They seem to be up-to-the-minute, but it’s hard for someone who doesn’t have a lot of time to read everything posted and know what sources.

Best examples of fake news and how they are going to spread?

It’s essential to be careful about what you read. That’s why it is crucial to fact-check anything that sounds too good to be accurate and confirm whether or not the news is real.

Fake news is everywhere. They are stories and headlines that people intentionally make up, usually to get other people worked up about a topic or event. There are several ways they spread fake news.

A typical example of fake news is the posts on Facebook, which are made by users to generate more interaction with their friends.

Fake news is an issue that has been growing for the past few years. It’s created by people who want to trick other people into thinking something untrue. These fake news posts are spread on many social media platforms, including Facebook, Twitter, and Instagram.

Solutions for Combating Fake News in the Future

One solution is that people can check sources of information and facts better. For example, they can look at the date it was published and see any updates.

Solutions for combating fake news in the future include educating people on identifying unreliable sources, allowing users to suspicious flag stories, and providing more transparency into how algorithms are created.

I am a believer in technology being the only way to combat fake news properly. A technical solution is the best approach because human beings are flawed and can’t be trusted to make an unbiased decisions.

Developing a formula for identifying fake news that will be universally accepted should be on the agenda of every government in the world.

How to identify a piece of fake news

One way to tell if a news story is fake is to link to credible sources. Instead, links are provided with “Read more” or “Watch here.”

Why are people drawn to fake news?

People are drawn to fake news because they want to feel that their beliefs and opinions are correct.

Humans are curious creatures. We want to know everything, but we are very simple at the same time. Information is constantly flowing through the internet, and sometimes it’s easy to get lost in it all.

People are drawn to fake news because they want an entertaining or exciting article. People do not care whether the information is true or false, but rather how it makes them feel.

Some people may be drawn to fake news because it’s entertaining or intriguing. But others are using it to influence their political beliefs.

One of the main reasons why people are drawn to fake news is because it is entertaining. It’s also easy to spread since anyone can easily share a fake online store.

The effect of fake news on the real world, including politics and society

Changing the world is hard. It’s even harder when you’re not sure what’s real and what isn’t.

It is difficult to estimate the impact of fake news on social media, but it has become increasingly popular, and some people have tried to use it for political gain.

Fake news is a growing problem that will continue to affect people of all ages. We must learn how to identify counterfeit articles.

One solution that I recommend is to read more often. This will let you make up your mind about the news and information you see on Facebook or other social media sites, rather than taking it at face value.

The best way to combat fake news is to practice skepticism. If something doesn’t seem right, research it!

Ways to teach others about identifying and avoiding the impacts of fake news.

An excellent way to teach others about fake news is by explaining what it is and how often it happens. It’s also significant to be aware of who your sources are so that you can understand their bias.

Did you know that there are three ways to detect fake news and avoid its impacts? The first is engaging in checking sources, the second is avoiding sharing articles without reading them, and lastly, paying attention to a site’s tone.

One way to teach others about identifying and avoiding the impacts of fake news is by teaching them how to identify a source. If they can tell where an article comes from, they’ll be able to notice if it’s biased or not.

The Fake News Crisis is a problem that’s not going away anytime soon. So, how can we detect it and stop the spread of misinformation? One potential solution to this complex issue may be sentiment analysis for fake political news detection. This approach could help identify false stories before they go viral by analyzing whether people are talking about them positively or negatively on social media platforms such as Twitter. If you want to learn more about this strategy and see what impact it has had in other countries worldwide, contact me today!

If you are still unconvinced about the validity of fake news, sentiment analysis is an excellent way to detect it. Sentiment analysis can be used through social media posts, articles, and any other content that has been written by people from both sides of an issue.

However, this type of data mining does not always give reliable results because there is no decisive answer for what constitutes true or false in every situation. That’s why I am here! If you need political fake news analysis reporting services, contact me today.