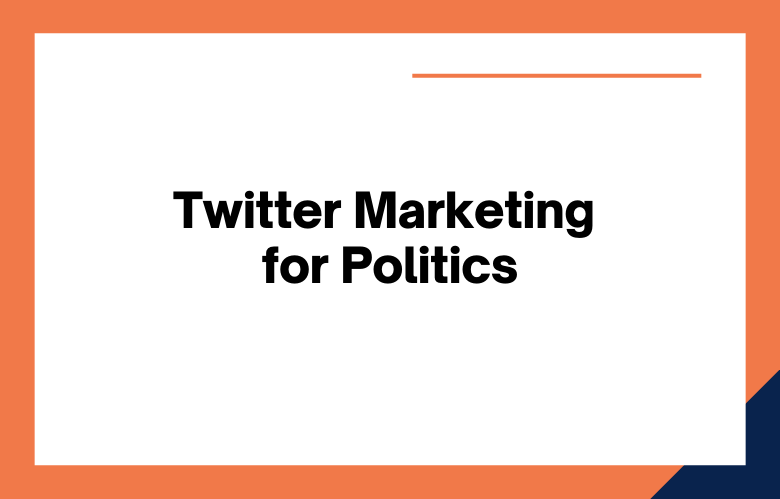 Twitter Marketing for Politics: Using Twitter for Politics isn’t a simple task. It can get confusing very quickly if you’re not an experienced Twitter user or never dealt with political campaigns in the past. Creating a Twitter marketing strategy requires researching your candidates, movements and finding your target audience before creating any scheduled tweets.

If you are new to Twitter, you might think that it is just another social media platform. However, it is so much more. You can see the buzz all over the place that Twitter is more than just a social media site; it is the media.

If you think about it, why do candidates use Twitter so much? It isn’t because they are bored and have nothing better to do with their time. They are raising awareness, creating discussion, getting their message out there, and sharing data.

Many of them are the same 500x (at least) since it’s pretty easy to develop a topic and plugin some tips for increasing followers, personal brand, etc.

Twitter marketing is now a valuable tool for campaigns.

Twitter is the most critical platform for political campaigning and encouraging voter turnout.

Politicians are in a constant battle to be heard. Twitter is a highly effective platform for getting your voice heard. Moreover, because of the fast-paced nature of Twitter, politicians can easily make mistakes or be out of touch with their audience.

Twitter marketing is an effective and low-cost tool for getting your message out to as many people as possible.

Twitter is a platform used for sharing and spreading information. It can be helpful in politics because you can get a large audience, spread your message quickly, and get real-time feedback about what’s resonating with that audience.

How To Successfully Run a Political Campaign On Twitter

If you’re planning on running a political campaign on Twitter, there are several things to keep in mind.

If you’re running a political campaign on Twitter, the most important thing is that you have a clear digital strategy.

Online political campaigns should use a mix of attractive hashtags, user-friendly memes, and endorsements from popular tweeters.

You can learn a lot from politicians about how to effectively use social media, especially Twitter.

How to get started with Twitter Marketing for Politics

There are many ways to promote your political views on Twitter, and this article will show you how to get started.

Starting a Twitter profile is easy, and it should be free.

Twitter is an excellent way to spread one’s message.

You do not need a degree to find out how to get started with Twitter Marketing for Politics, and you do not need to spend years doing it.

Suppose you’ve already started building a Twitter presence and community for your business; great! If not, it’s time to get started.

For those considering a Twitter campaign in the future, there are certain key elements that they should consider.

On Twitter, you can use Promoted Posts to promote your Tweets to similar accounts. Promoted Tweets and Promoted Accounts will only be shown if the user is not already following your account.

You can use trending topics for the promotion of your political campaign and gain more supporters.

If you’re running for office, you can use Twitter Trends to your advantage.

Twitter trends can be an effective way to promote your political campaign.
In the last few weeks, I’ve noticed that Twitter Trends has become increasingly crucial for spreading political messages, news, and information.

You can use Twitter Trends to gauge your campaign’s popularity or lack thereof.

Twitter Trends are important because they can help get your messages spread out further.

If you are planning to conduct a political campaign, you should consider using Twitter Trends, as they can significantly increase your visibility on Twitter.

Twitter Trends has become a new way of promoting your political campaign and building a following.

Twitter Trends is a tool that harnesses the power of Twitter to allow you to tap into key trends and topics that are popular and relevant to your audience.

If you’re looking to get the word out about your campaign, you should consider Twitter.

While it is interesting to observe changes in Twitter Trends, and while seeing how your tweets perform over time and against other tweets can be helpful, the ultimate goal of this activity has to be getting people to take specific actions.

If you want to get a sense of what voters are talking about right now, you should check out Twitter Trends.

Social media is a massive platform for almost any marketing tactic- with the right amount of effort and the correct type of information, you will keep your followers coming back time and again.

There is a reason politicians use Twitter; it gives them the chance to reach a broader audience and share their views. It works by targeting specific users; they can do this to promote their views on different topics much more effectively than they were able to before.

One thing that Twitter has going for it is the fact that updates are incredibly fast-paced and this is not just restricted to individual tweets; these updates also include

Twitter is a popular medium in politics. Learn the ins and outs of Twitter to reach out to your target audience.

Twitter has been a potent political tool; take advantage of it to push your message and rally your base!

The best way to use Twitter for politics is to be more than just another candidate spouting talking points; instead, use an actual conversation you’re having with an honest and genuine voice.

Twitter is an effective way to communicate with followers of a political campaign.

Twitter can help you connect with political groups in ways you never could before. You can even use hashtags to find out what your customers are talking about.