How Technology is Changing the Future of Political-Social Engineering 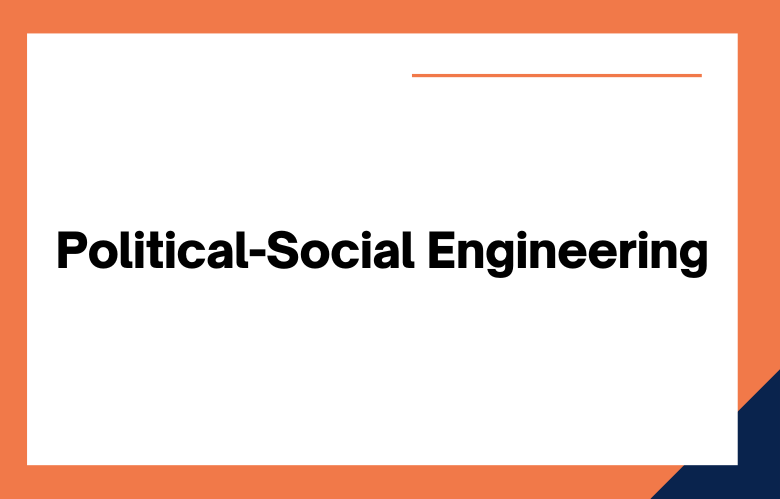 Social engineering has been around since humans first started living in groups. It is the process of convincing people to do something they would not normally do or getting them to believe something untrue.

In its earliest form, social engineering was used by leaders to control their followers.

Today, social engineering is still used by politicians and other leaders, but the methods have changed.

With the advent of new technologies, social engineering has taken on a new form.

Technology is changing the future of Political-Social Engineering

In the past, political-social engineers would use propaganda to control the masses.

They would use television, radio, and print media to spread their message and influence people’s opinions.

While these methods are still used today, they are not as effective as they once were.

People are more skeptical of what they see and hear in the media and access a broader range of information sources than ever before.

As a result, it is more difficult for political-social engineers to control what people think.

The internet has made it easier for people to connect and share information.

This has led to the rise of “fake news” and “echo chambers,” where people only encounter information that reinforces their existing beliefs.

Political-social engineers can take advantage of this by using algorithms to target people with specific messages designed to influence their opinions.

They can also use social media platforms to spread disinformation and promote conspiracy theories.

Social media platforms have become essential for political campaigns. They provide a direct way to reach out to potential voters and get your message across without going through traditional television or print media outlets.

However, these platforms can also spread false information and manipulate people’s opinions.

For example, during the 2016 election, dozens of fake news stories were circulating on Facebook about both candidates.

These stories were so well done that they fooled even the most skeptical readers.

As we head into future elections, we must be aware of this manipulation and refrain from sharing articles or posts we haven’t verified as accurate.

Above all else, we need to be critical thinkers and do our research before believing everything we read online.

Psychographics is a type of marketing that uses psychological factors to segment consumers by their attitudes, values, beliefs, and lifestyles.

This information can create targeted ads and messages that appeal to certain people.

Microtargeting is similar to psychographics because it uses information about people’s demographics, interests, and behavior to segment them into smaller groups.

In the context of politics, depending on the past behavior of voters, predictive analytics can be used to predict how people will vote.

This information can then tailor messages and ads specifically for those people.

Behavioral change tools are techniques that are used to change people’s behavior.

One example is the “nudge theory,” which posits that small changes in someone’s environment can lead them to make different choices without realizing them.

Another example is “Behavioral Insights Teams,” which are groups of experts who use scientific data to change people’s behavior on a large scale.

In the past, political-social engineers relied heavily on traditional media platforms to reach their target audiences.

However, these days, thanks to the power of the internet, it’s easier than ever for political-social engineers to reach people directly.

This is a far cry from the one-size-fits-all approach that was once common in the field.

As technology evolves, the field of political-social engineering will likely continue to change along with it.

We can only imagine what new approaches and techniques will be developed in future years.

For now, one thing is sure: the future of political-social engineering is looking very bright.

Social media is one of the most potent tools in the political-social engineer’s toolbox.

Platforms like Twitter and Facebook give rise to new forms of political communication and allow for the spread of information (and disinformation) at an unprecedented rate.

Politicians and movements that can harness the power of social media will have a significant advantage in the years to come.

Another tool that is becoming increasingly important is big data.

The ability to collect and analyze large amounts of data is giving rise to a new breed of politicians who can make more informed decisions based on real-time feedback from constituents.

This feedback loop has the potential to revolutionize the way politicians can communicate with their constituents and could lead to a more responsive and accountable government.

As artificial intelligence (AI) and automation technologies continue to develop, they will profoundly impact politics and society.

AI can be used for everything from analyzing social media data to automatically generating campaign ads.

Automation, meanwhile, can be used to streamline everything from voter outreach to fundraising.

As these technologies become more prevalent, those who know how to use them will have a significant advantage over those who don’t.

The Evolution of Political-Social Engineering

In the past, political-social engineers employed a one-size-fits-all approach to influencing people’s behavior.

They would identify a group of people with similar characteristics—such as age, gender, or income—and then target them with a message designed to appeal to that group as a whole.

However, this approach is no longer effective in today’s hyper-personalized world.

Thanks to big data and artificial intelligence, engineers can now target individuals with greater precision.

They can identify the specific values, beliefs, and emotions that drive an individual’s behavior and then craft a message that resonates with those values.

What’s more, they can do this at scale.

And because these platforms allow users to share content with their friends and followers, messages can spread virally—meaning that one well-crafted letter has the potential to reach billions of people around the world.

The Future of Political-Social Engineering

As technology continues to evolve, so too will political-social engineering. In the future, we can expect engineers to become even better at targeting individuals with personalized messages.

We can also expect them to engage with virtual and augmented reality technologies to create more immersive experiences designed to change people’s behavior.

What does this mean for Democracy?

It’s hard to say for sure. On the one hand, political-social engineering could be used for good—for example, by promoting understanding and cooperation among people from different backgrounds.

On the other hand, it could also be used for nefarious purposes—for example, by spreading propaganda or stoking division and hatred among groups.

Social media has become one of the most potent tools for political-social engineering.

This makes it easy for foreign actors to spread disinformation and sow discord in other countries.

It also makes it easy for domestic actors to target ads and messages based on their interests and demographics to specific groups of people.

A deepfake video is a fake video that uses AI to superimpose someone’s face onto another person’s body to make it look like they are saying or doing something they didn’t say or do.

This presents a severe threat to Democracy because deepfake videos could be used to sway public opinion by spreading false information about candidates or public figures.

Microtargeting is a marketing strategy that uses data collected from online sources to create customized messages and ads for specific groups of people.

For example, Facebook allows advertisers to target ads to users based on their interests, location, age, gender, and more.

This makes it easy for campaigns to laser-focus their message on specific groups of people who are more likely than others to support their candidate or issue.

The Internet of Things

One of the most game-changing technologies in political-social engineering is the Internet of Things (IoT).

The IoT is a network of physical objects—devices, vehicles, buildings, etc.—connecting to the internet, collecting and exchanging data.

Thanks to the IoT, it’s now possible to collect more data about people than ever before—and that data can be used to influence people’s behavior in specific ways.

For example, let’s say you’re running a political campaign and want to target potential voters who are likely to support your candidate.

With the IoT, you can use data collected from people’s smart devices to target them with ads specifically designed to appeal to their interests.

You can also use that data to understand better what issues are important to them and craft your campaign messaging accordingly.

The possibilities are endless—and dangerous if misused.

Big data is simply a term used to describe datasets that are too large and complex for traditional data processing techniques.

Thanks to advances in AI, however, it’s now possible to glean insights from big data sets that were previously inaccessible.

This has significant implications for political campaigns, which now have access to unprecedented information about potential voters.

Technology has made it easier for political-social engineers to influence people’s opinions.

They used propaganda to control the masses in the past, but today they use more sophisticated methods, such as targeting people with specific messages and spreading disinformation.

As technology advances, so too does the ability of political-social engineers to influence the masses.

As technology advances, our methods for political-social engineering must adapt as well.

The days of traditional campaigning are numbered; we must move towards a more holistic approach that considers all aspects of the human condition to succeed in the future.

Contact us today if you’re interested in learning more about how we can help you win elections.

We’ll be happy to discuss your specific needs and tailor a solution that fits you best.