How to Run a Successful Grassroots Election Campaign 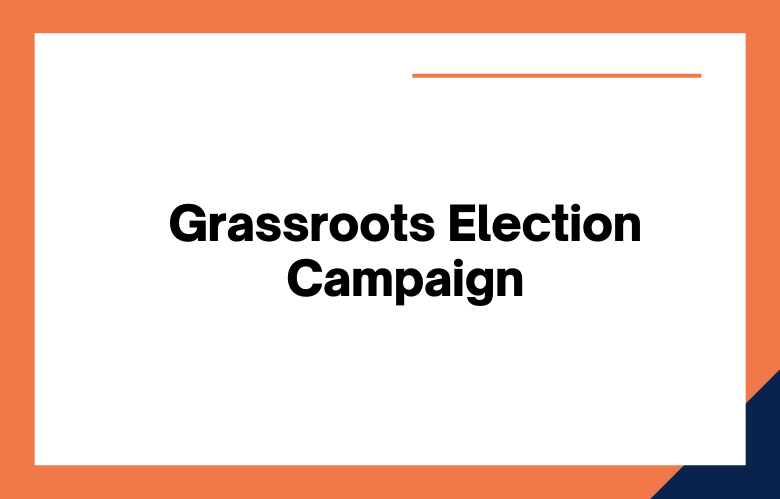 Grassroots Election Campaign has been around for a long time. It’s the type of marketing that politicians do when they walk down the street and shake hands with people or go door to door in neighborhoods to talk about their platform. Recently, this approach has been applied by entrepreneurs who want to connect with potential customers on a more personal level.

They are using these tactics because it is often easier than traditional methods like cold calling or advertising on TV.

These entrepreneurs have found success in reaching out directly to their future consumers through social media channels such as Twitter and Facebook, which is why Political Grassroots Marketing maybe your best option too!

Are you frustrated with your political party and how campaigns are run? Maybe it’s time to take a new approach.

We will cover how grassroots marketing can help you personally and financially support your candidate of choice and those who align themselves with similar values. It will also show you some tips for getting started on this type of activism so that you can see results quickly.

What is Grassroots Marketing?

Grassroots marketing involves getting the word about a product or service directly to people you know. It’s an old-fashioned way of marketing, but it has always been one of the most effective ways to get noticed and votes.

What is Political Grassroots Marketing?

Political Grassroots Marketing is when you use your political views to help spread a message about an issue. It can be used in any situation, and it’s fun!

Political Grassroots Marketing is a way to promote your political views through word-of-mouth, media outlets, and social media.

Political Grassroots Marketing is a method of political campaigning that uses marketing strategies.

How to Run a Successful Grassroots Election Campaign

A grassroots election campaign is a great way to get people excited about your ideas. But if this is the first time you’ve run for office, it can be hard to know where to begin.

It would help if you won the hearts of your constituents by showing that you’re approachable and honest.

One way to run a successful grassroots election campaign is using several tools. You can start by creating a website and sharing your platform with your friends, family, and neighbors. Get their support for you online through email.

Do you know that newsletters are the best way to run a successful grassroots campaign? You can use it to spread your message by telling people about your stance on various issues.

If you’re considering running for office, it’s best to start building your grassroots base now. You need many volunteers and donations from the beginning if you want to win by a landslide!

Our grassroots election campaign has been running for several months and has had some fantastic results. Initially, as a community member, I would like to thank everyone who helped make this happen.

Assuming your campaign is grassroots – and not focusing on a personal “one person” goal, you’ll want to start small. It’s been said that grassroots organizing is someone showing up at your door to ask for help on a specific issue that affects them or their community.

Start by identifying the voter base you’re interested in reaching – perhaps women over 55 years old with children in school within a particular school attendance zone.

Then figure out what main issues they care about and contact people already doing work related to those issues which might be able to assist you – preferably with warm introductions from people who know how active/helpful these organizers are).

One of the best ways of staying involved with potential constituents after the election.

How Grassroots Marketing Can Help Grow Your Political Campaign

Grassroots marketing is all about mobilizing your supporters to act as ambassadors for your campaign by bringing awareness to your brand.

This campaigning has proven the most effective form of advertising in modern politics. It allows campaigns to reach voters who can vote but can’t become cheaply through traditional media.

These people either don’t watch TV or receive their political information online.

Grassroots Marketing is impersonal, but it’s also pretty sure that if someone you knew voted for them (and made a convincing argument), they’re likely voting for them too.

Example 2: “This candidate cares about what the average

The initial and most important thing to do is build a genuine political campaign: A campaign that’s open and welcoming, one where everyone feels like they can speak up.

It would help if you had the grassroots- all of us- to feel you are “one of them.” It has to come from you, not your staff.

You have to take the time to meet with people individually or in small groups whenever possible.

And if you cannot make it for some reason, be sure your local surrogates are out there shaking hands and holding town hall meetings.

The more real contact delegates have with their candidates, the better they’ll feel about sending money or volunteering their time on behalf of that candidate’s campaign!

Grassroots Marketing is a form of marketing that uses simple elements to produce an impressive outcome. Usually, it entails getting family members and friends to do some work on your behalf.

The idea of using people’s connections goes back to when word-of-mouth advertising was the only way to market. This can be implemented in different ways with social media today; one example is people sharing their product endorsements on Facebook.

Through community-building techniques, politicians can establish more value for their party among voters by employing a grassroots marketing strategy among different communities of interest or fans of the party.

To make a difference in your community, start by understanding the grassroots marketing landscape.

Grassroots campaigns are often more successful than other types of political campaigning because they come from within communities and not outside forces like PACs or Superpacs.

We specialize in helping organizations develop their own grassroots campaign strategy tailored to any demographic, emphasizing social justice issues. Let us know to support your mission today!