Issue Based Political Advertising: Issue Ads the Next Big Thing 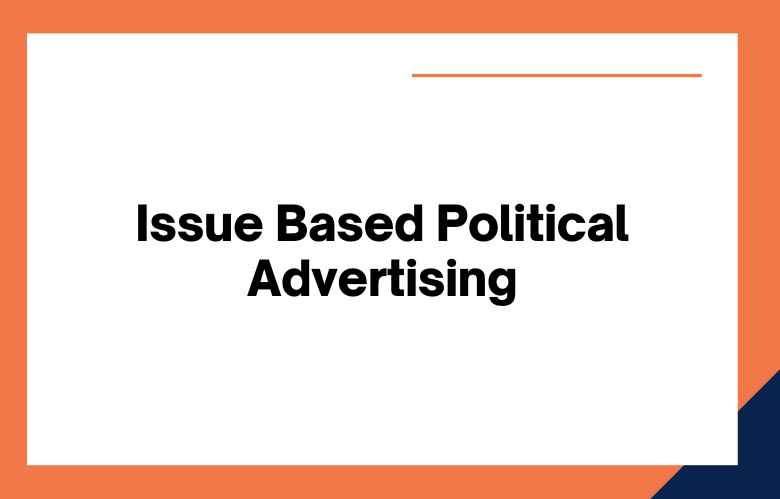 Political advertising is rapidly evolving. In the past, political ads were focused on promoting a candidate or party, but now we are seeing a shift toward issue-based advertising. Issue ads are designed to raise awareness about a particular issue and persuade people to take action.

The benefit of issue-based advertising is that it allows candidates and parties to focus on the issues that matter most to voters. It also allows them to reach a wider audience than traditional advertising methods.

There are some challenges with issue-based political advertising, however. First, measuring an ad campaign’s effectiveness cannot be easy. Second, there is a risk that voters will become overloaded with information and tune out completely.

But if done correctly, issue-based political advertising can be a powerful tool for changing hearts and minds.

What are Issue Ads?

Issue ads are political advertisements that focus on informing voters about where candidates stand on the issues instead of attacking their opponents. These ads started gaining popularity in the 2018 midterm elections and are a response to the negative campaigning that has become too common in recent years.

Issue ads are a new form of political advertising that is becoming increasingly popular. Issue ads are designed to raise awareness about a particular issue rather than explicitly supporting or opposing a candidate.

This type of ad is often seen as more effective than traditional political ads, which often feel like they’re trying to sell you something. Issue ads usually take a more informational approach and can be very convincing.

One of the most notable examples of an issue ad was the “Macaca” ad that was run against former Virginia Senator George Allen in 2006. The ad, which featured footage of Allen making what appeared to be a racist remark, was credited with helping to sink his re-election campaign. Issue ads can be compelling because they can reach a broad audience and don’t need to be authorized by a candidate or political party.

The pros of issue Ads

The biggest pro of issue ads is that they attempt to inform voters about where candidates stand. In an era where it seems like most politicians are more interested in name-calling and mudslinging, it’s refreshing to see ads that focus on providing basic information. Issue ads force candidates to focus on the issues instead of attacking their opponents. And in theory, that should lead to a more civil and productive debate about the issues that matter.

The cons of issue Ads

The biggest con of issue ads is that they can be vague and nonspecific. These ads often make broad statements about a candidate’s stance on an issue without getting accurate details. So while they may be informative, they’re not always accommodating when making an informed decision at the polls. Another potential downside of issue ads is that they could backfire if voters perceive them as disingenuous or hypocritical.

Recently, we have seen a shift in how political campaigns are run. There is now a greater focus on issue-based campaigning rather than simply promoting a candidate or party. Issue-based campaigning is designed to raise awareness about a particular issue and persuade people to take action.

The benefit of this approach is that it allows candidates and parties to focus on the issues that matter most to voters. It also allows them to reach a wider audience than traditional advertising methods.

Issue ads can take many forms, but they all have one thing in common: they focus on a specific issue. This could be anything from healthcare reform to tax policy to gun control. The key is to find a topic that resonates with your target audience and then craft an ad that speaks directly to that issue.

One of the great things about issue ads is that they can be customized to fit any budget. Smaller campaigns may run ads on social media or with targeted Google AdWords, while more extensive campaigns may opt for TV or radio spots.

Regardless of their form, issue ads are an extremely effective way to reach voters who care about the issues that matter to you.

What Makes Issue Ads So Effective?

Issue ads are often more effective than traditional political ads because they don’t feel like commercials. They’re usually more informative and less full of slogans and catchphrases. This makes them more persuasive since people are likelier to listen to an ad that seems interested in educating them rather than one that wants their vote.

Another reason issue ads are so effective is that they can reach a wider audience than traditional political ads. Standard political ads are only shown during election seasons on TV and radio. But issue ads can be delivered at any time on any platform.

This means that they have the potential to reach people who might not otherwise be exposed to political messages.

Issue-based political advertising is any political ad that takes a position on a specific issue rather than promoting or attacking a particular candidate. We see more and more of these ads because they effectively persuade voters.

One of the reasons for this is that issue-based ads tend to be more informative. They provide voters with information about where the candidates stand on the issues that matter to them. This information can be essential in primary elections, when voters may be less familiar with the candidates’ positions.

Another reason issue-based ads are seen as more compelling is that they tend to be less polarizing than candidate-specific ads. People are often turned off by negative campaigning, and issue-based ads allow candidates to focus on their favorable positions without attacking their opponents.

However, not everyone is a fan of issue-based political advertising. Some critics argue that these ads make it harder for voters to understand where candidates stand on the issues. Others worry that they will lead to even more negative campaigning, as candidates attack each other’s positions on the issues instead of focusing on their records.

Issue ads are a relatively new phenomenon in the world of political advertising. Unlike traditional ads focusing on a candidate’s character or record, issue ads focus on a specific policy issue.

For example, an issue ad about healthcare might discuss the pros and cons of a particular healthcare plan without mentioning any candidates by name. This type of advertising allows voters to make more informed decisions about who to vote for and helps start a dialogue about important issues.

However, if done correctly, issue-based political advertising can be a force for good in our democracy.

Issue-based campaigning is a powerful tool for persuasion, but it comes with some risks. Nonetheless, as we see more campaigns shifting away from traditional means of promotion and towards this type of advertising, it’s clear that issue Based Political Advertising: Issue Ads Are The Next Big Thing.

Political advertising is evolving issue Ads are the next big thing. Issue ads allow candidates to take a stand on an issue without endorsing a specific candidate or party. Because these ads don’t have the same restrictions as campaign ads, they can be mighty in swaying public opinion.

We specialize in creating effective issue-based political advertising. If you want to get your message out there but don’t know where to start, contact us for political Advertising Consulting.

We’ll help you craft a strategy to reach your target audience and influence their vote.