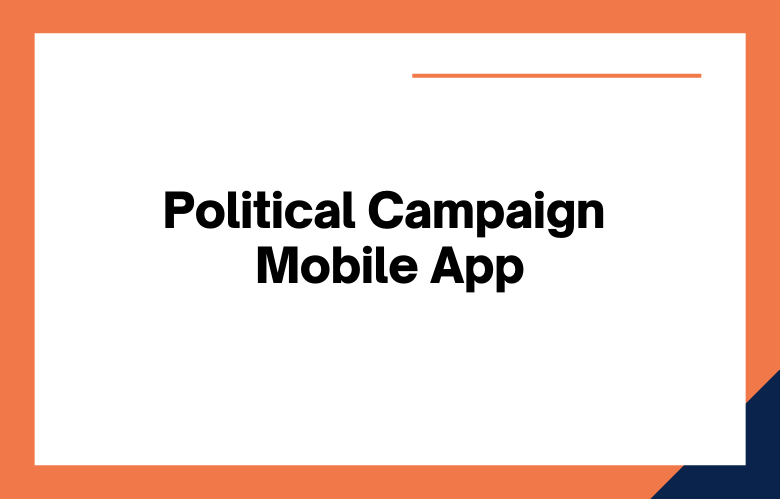 Political Campaign Mobile App: Political campaign app is one of the latest trends on the internet, and for good reasons. Many people are very much engaged in political news. They love to discuss their favorite political party and always looking for the latest news.

Scores of politicians use social media like Facebook, Twitter, and YouTube to connect with their voters. But you may be knowing that not everyone in this world has access to the internet. This is why they prefer watching TV or read a newspaper about politics.

If you are in a campaign and don’t try to win, you are not on the top list. You need an app to manage your plan, create vote campaigns, and let your voters know what they should do next.

Political Campaign Mobile App helps politicians build a house file application for Android, iOS, and Windows platforms. It allows political campaigns to collect contact information such as email, name, address, phone number, and social network details. The database enables the party to have all the data in one platform without using a third-party service. The app also supports donations through credit cards, debit cards, PayPal, and Bitcoin.

The mobile app is the key to success for any political campaign. The best part about developing a mobile app for campaigns is that they don’t choose whether or not to create one.

Have you ever thought about running for political office? One way to get your name out there and be noticed much like you’re doing now is to create a mobile app specific to your campaign.

Nowadays, people are spending more time on their mobile phones than on desktop computers. That’s why it’s essential to consider building a mobile app for your political campaign. A mobile app can provide your campaign with an additional way to engage with potential voters and volunteers while also helping you raise money outside of traditional means.

The political campaigns have gone high-tech with the recent use of the mobile app for campaigning. The use of technology has significantly decreased the cost of campaigning, and it has also reduced the contact time between voters and representatives.

The strategy in marketing a political campaign has shifted to the use of mobile promotions and social networking. This strategy is much more effective and efficient than its predecessor – traditional print materials.

However, there are numerous app developers for Political Campaign Management App, and making an informed choice can be challenging.

It’s hard to win an election…unless you use the Political Campaign Management App.

A political campaign management app is a software application companies can use to manage all their campaigns. These apps are used by political candidates and teams to ensure that they are getting as many votes as possible.

Most political campaign apps we have seen are built by the campaign team. They require a lot of time and effort to be developed. But we wanted to improve on that and make it easier for campaigns to use software specific to managing their campaigns. There are no cookie-cutter solutions, so each app is unique based on what makes sense for the campaign, its target voters, and supporters.

It is an all-in-one solution that allows for effortless data entry, efficient political campaign coordination, and comprehensive political data tracking.

Political campaign mobile apps have a unique set of characteristics, though they are in many ways similar to other kinds of mobile apps.

The Political Campaign Mobile App Types are used mainly by campaign staff. Here’s how you can use this app type:

There are several types of political campaign mobile apps. The most common approaches are:

If you have a political campaign mobile app, it’s essential to keep the app up-to-date so that your voters can find out about your latest news and developments.

How are mobile apps transforming the election landscape?

Mobile apps are not just a fad; they’re transforming the election landscape and changing how politics gets done.

Some election campaigns are using mobile apps as a way of connecting with voters.

Mobile apps are helping political organizations to stay connected with voters for more extended periods so that they can gather the information that can help them build a more accurate picture of what people want and need.

With increasing technological capabilities, elections have evolved from traditional political rallies to direct interaction with voters via mobile apps.

What are the latest trends for mobile politics?

In the private sector, mobile has been growing in importance for some time. Nowadays, it seems that politics are becoming more and more mobile.

As technology rapidly advances, mobile devices are beginning to play a more significant role in politics.

Mobile politics is becoming more prevalent as a means of spreading political influence.

Mobile politics is becoming increasingly important as people get more protective of their personal information and privacy.

The mobile voting trend is expected to skyrocket shortly.

Political campaigns in return for information could reward users with money, trivia questions, or discounts on products and services.

Campaign Agencies should look into using a mobile application platform for their campaigns.

Political Campaigns are notorious for not using technology to their advantage. You can help them by making an app that makes it easy for them to get things done. Build on your areas of expertise so you can understand the needs of that community.