The Rise of Political Trolling in Social Media 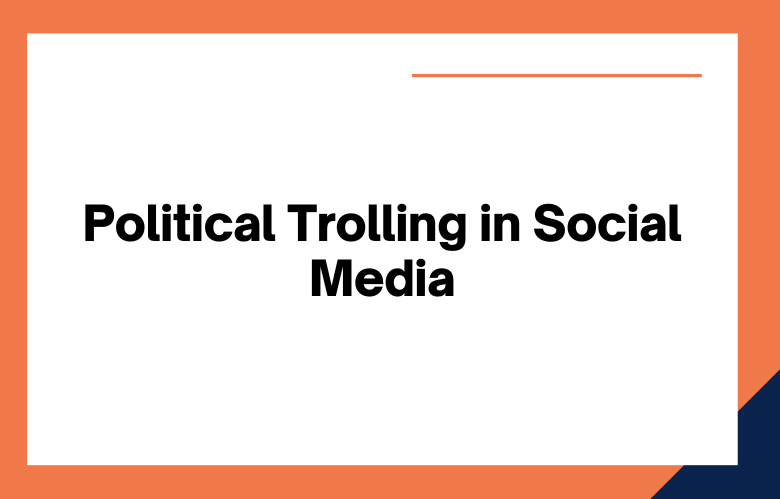 In recent years, the world has become increasingly connected via social media. While this connection has allowed us to communicate with people from all over the world and brought us closer together, it has also given rise to a new form of political trolling – people who use social media to spread misinformation and hateful messages about politics.

This trolling is becoming increasingly common, but what are its causes?

Political trolling on social media has become a significant issue in recent years. It is defined as using hostile or offensive language to provoke, agitate, and cause emotional distress in others online.

This type of behavior can find on any platform, from Twitter to Facebook, but it seems particularly prevalent during political campaigns and debates.

We’ll examine why political trolling is becoming so common and what we can do to address it.

Why is Political Trolling so common?

For one thing, anonymity allows people to say things they would never say out loud or face-to-face.

There’s often an element of mob mentality involved in political trolling; when someone says something outrageous or offensive, other people may join in without thinking about the consequences of their words.

This creates an environment where inflammatory and insulting rhetoric becomes commonplace.

What can be done about Political Trolling?

The good news is that steps can take to combat political trolling on social media platforms.

First and foremost, sites should have clear guidelines outlining acceptable behavior and enforce those rules consistently.

Moderators should monitor comments sections for signs of trolling behavior and delete offending posts as soon as possible.

Users should take responsibility for their actions by being aware of what they say online and not engaging with trolls trying to provoke them into an argument.

The Growing issue of Political Trolling in Social Media

The causes of Political Trolling

There are several causes behind the rise of political trolling in social media.

One is that it allows people to remain anonymous while they spew their hate-filled rhetoric. This anonymity can give people the courage to say things they wouldn’t necessarily say face-to-face.

Trolls can hide behind the shield of “free speech” when engaging in their behavior, making them feel more comfortable and encouraged in their actions.

Another cause behind political trolling is that these trolls often see themselves as having a critical mission to defend their own beliefs or attack those of others.

They view themselves as having a moral authority or even superiority over others and take pleasure from feeling powerful in this way.

Some trolls may be bored and looking for attention or entertainment by stirring up controversy on social media platforms.

Some political trolls may be motivated by money or fame.

Specific organizations may pay them to spread false information or engage in harmful behavior to sway public opinion or influence elections.

Other trolls may seek recognition for their work and use trolling to gain followers and “likes,” which will increase their online presence.

How does Political Trolling Work?

Political trollers use a variety of tactics to spread false or misleading information about political candidates or issues.

They may post blatantly false comments, engage in inflammatory debates with other users, or create fake accounts to make their posts appear more credible.

By doing this, they can manipulate public opinion by sowing confusion and doubt about specific topics or candidates.

Why is Political Trolling hard to combat?

The main issue with combating political trolling is that it is tough to identify and stop before it reaches its intended audience.

Social media platforms have implemented various measures, such as algorithms and user reporting mechanisms, to stop trolls from spreading misinformation, but these methods are only sometimes practical.

Trolls often use multiple accounts to remain anonymous while still reaching large audiences with their messages.

What can we do about Political Trolling?

The best way to combat political trolling is by educating ourselves on the issues we care about. Researching reliable sources and looking at multiple sides of an argument will help us spot potential trolls more efficiently and make informed decisions when voting or participating in debates online.

If you encounter any suspicious accounts or posts on social media, report them immediately so the platform can take action against them if necessary.

What makes Political Trolling so dangerous?

Political trolling is dangerous because it takes advantage of the fact that most people need to take the time to verify whether or not the information they see online is accurate.

It also exploits people’s tendency to share information without thinking—primarily when emotionally invested in a particular issue or outcome.

This means that even if a person knows better, they may still sway by political trolls who can manipulate their emotions and spread misinformation.

How can we protect ourselves from Political Trolling?

The best way to protect yourself from political trolling is to be aware of it in the first place. Pay attention to the language used in online political discussions and be wary of inflammatory posts or misleading information.

If you come across a post that seems suspicious, take a moment to research it before sharing it with others. Additionally, avoid partisan discussion forums, as these are breeding grounds for trolls looking for easy targets.

Political trolling is becoming increasingly common on social media platforms, with severe repercussions for our society.

We need to understand the causes behind this phenomenon to combat it effectively and ensure that our public discourse remains civil and productive rather than divisive and destructive.

By understanding why people troll politically, we can better equip ourselves with tools and strategies for dealing with these issues when they arise.

With a concerted effort from all sides, we can create a better environment for public dialogue on social media platforms worldwide.

Political trolling has become a significant problem on social media platforms as people use it to spread false information and manipulate public opinion for their gain.

It has proven difficult for platforms to contain this behavior due to its anonymous nature. Still, there are steps we can take as individuals to protect ourselves from being misled by trolls, such as researching reliable sources and reporting suspicious accounts immediately when we encounter them online.

Taking these precautions will help us stay informed and less susceptible to manipulation during election season or when politics come into play online.

As we’ve seen, political trolling is rising, and it’s not going anywhere.

With social media being such a big part of our lives, it’s essential to be aware of the tactics used by those who want to manipulate public opinion.

We offer political and social media consulting to help you navigate this increasingly complex landscape.

Contact us today to learn more about how we can help you win the online battle for hearts and minds.