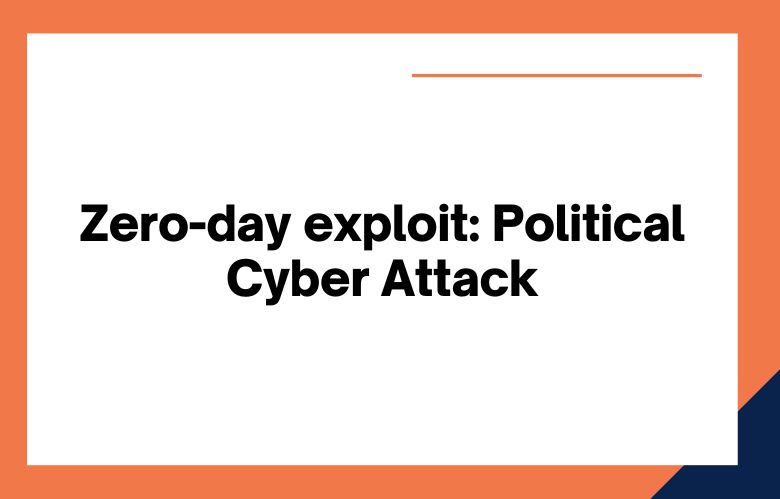 Zero-day exploits are attacks that take advantage of vulnerabilities in software on the same day they are discovered. These attacks can have serious consequences.

In political cyber attacks, the zero-day exploit is the most sophisticated and dangerous weapon. This attack takes advantage of previously unknown vulnerabilities in software or hardware to gain access to a target system.

Zero-day exploits are difficult to prevent because they are, by definition, unknown until they are used.

Once a zero-day exploit is discovered, one can use it repeatedly to launch attacks against multiple targets. This makes them especially dangerous because a single successful attack can have far-reaching consequences.

Zero-day exploits are challenging to defend against because they require a fundamental change in how we think about cybersecurity. Traditional security approaches focus on stopping known threats.

But with zero-day exploits, we need to focus on proactively finding and fixing vulnerabilities before they can be exploited.

To do this, organizations must shift their focus from reactively patching systems to actively hunting for vulnerabilities. This requires significant changes in both people and technology.

And they need to give their security teams the tools and resources needed to be successful.

What is a zero-day exploit?

A zero-day exploit is an attack that takes advantage of a software vulnerability on the same day that the vulnerability is discovered. Because these attacks occur before patches or fixes can be released, they can be challenging to defend against.

Zero-day exploits are usually kept secret by the developers who create them. It means it is often little to no information available about how they work or how they can be defended against.

However, we do know that nation-states usually carry out these attacks for espionage or sabotage purposes.

Zero-day exploits are sometimes sold in the black market to criminal organizations. However, this is rare because the price of these exploits is typically very high (in the millions of dollars range).

A zero-day exploit is a computer attack that takes advantage of a previously unknown security flaw in software or hardware.

These attacks are difficult to defend against because traditional security measures do not detect them. As a result, they can cause severe damage to a target system.

How do Zero-Day Exploits Work?

Zero-day exploits generally work by taking advantage of vulnerabilities in software or hardware that have not been patched or fixed by the manufacturer.

In some cases, attackers will use social engineering techniques to trick users into downloading and running malicious code that will exploit the vulnerabilities.

Once the attacker has gained access to the system, they can install malware, delete files, or even take control of the system remotely.

Why are Zero-Day Exploits so Dangerous?

Zero-day exploits are dangerous because you can use them to access systems and networks without being detected by traditional security measures. This allows attackers to stealthily install malware, delete files, or even remotely control the system.

As a result, these attacks can have severe consequences for individuals and organizations alike.

How can you defend against a zero-day exploit?

The best defense against a zero-day exploit is to have good security practices in place. This includes using up-to-date software, implementing strict access controls, and having a solid incident response plan.

It is essential to stay updated on information security news to patch any vulnerabilities in your systems quickly.

Hackers have targeted German politicians before. In 2015, the German parliament was hit by a massive cyber attack that leaked sensitive data online.

That attack was attributed to Russian hackers, and it is believed that this latest attack may also be the work of Russian operatives. If so, it would represent a severe escalation in the ongoing cyber arms race between Russia and the West.

How a Zero-Day Exploit Works

Generally, a zero-day exploit can be divided into three stages: reconnaissance, exploitation, and post-exploitation.

The first stage, the survey, is when the attacker researches to find out as much as possible about their target. They might use social engineering to trick someone into giving them information or scan websites and networks for vulnerabilities.

Once the attacker has found a vulnerable system, they will move to the next stage: exploitation. In this stage, the attacker will attempt to take advantage of the vulnerability to gain access to the system.

If they are successful, they will move on to the final stage: post-exploitation, where the attacker will try to collect as much information as possible or change the system without being detected.

The vast majority of computer vulnerabilities are discovered by security researchers who then notify the affected party so that they can patch the flaw and prevent outsiders from exploitation. However, sometimes, malicious actors find vulnerabilities and then keep the flaw secret to exploit it for their gain.

These are known as “zero-day” exploits because there are zero days between when the vulnerability is discovered and when it is exploited. In some cases, flaws may even be intentionally introduced into software by design as part of what is known as an “advanced persistent threat” (APT) attack.

Why Zero-Day Exploits are so dangerous

Zero-day exploits are dangerous because you can attack before anyone knows the vulnerabilities exist. It gives attackers a significant advantage over Defenders who scramble to patch the flaw after an attack.

Furthermore, because zero-day exploits take advantage of unknown vulnerabilities, traditional security solutions such as antivirus and firewalls are often ineffective at stopping them.

Zero-Day Exploits in the Political Arena

In recent years, it has been an increase in the use of zero-day exploits for political purposes. Nation-states or other groups usually carry out these attacks with sophisticated technical capabilities and a motive to disrupt or interfere with the political process.

There have been several high-profile political cyber attacks that have made headlines around the world. Here are just a few examples:

A zero-day exploit is an attack that takes advantage of a software or hardware flaw unknown to the vendor. These attacks are hazardous because they can go undetected for months or even years.

Investing in strong cyber security measures is essential to protect your country from falling victim to a zero-day exploit. This includes training your employees in best practices for cyber security, implementing two-factor authentication, and using antivirus software.

It is also essential to keep up with patches and updates for your software and hardware. By staying up-to-date, you can help minimize the chances of your country being targeted by a zero-day exploit.

Zero-day exploits are the most sophisticated and dangerous weapon in political cyber attacks.

This attack takes advantage of previously unknown vulnerabilities in software or hardware to gain access to a target system.

Zero-day exploits are difficult to prevent because they are, by definition, unknown until they are used.

Once a zero-day exploit is discovered, one can use it repeatedly to launch attacks against multiple targets.

This makes them especially dangerous because a single successful attack can have far-reaching consequences.

To defend against zero-day exploits, organizations must shift their focus from reactively patching systems to actively hunting for vulnerabilities.

And they need to give their security teams the tools and resources needed to be successful.

The zero-day exploit is a particularly insidious cyberattack that can be difficult to defend against.

It takes advantage of a security flaw that has not been previously identified or patched, making it very hard for defenders to know what they’re up against and mount an effective counterattack.

If you are responsible for the security of your political organization, it is essential to be aware of this threat and take steps to mitigate the risk.

We offer expert consulting services to help organizations identify and protect themselves from these attacks.

Contact us today to get more information about how we can help keep you safe online.